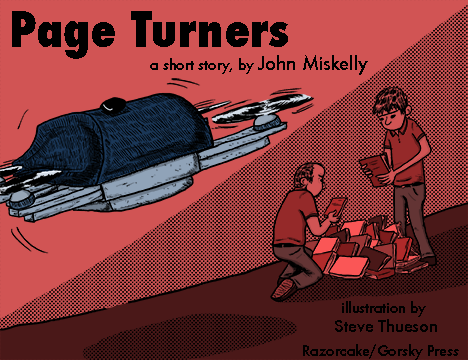 Download this short story as an ebook right here.

“Fuck off, with this traffic?” Gavin gestured towards the car immediately in front of the van.

“It’s on the council’s website, ‘European Green Capital of the year’,” said Greg, sitting in the passenger seat and reading from a tablet.

“It’s gridlock and it’s not even rush hour. Green capital? Green bollocks is what that is.”

Greg waited for Gavin to cease his self-inspired chortles.

“Now Germany—” Gavin raised his finger with bookish authority, “have you ever been to Germany, Greg?”

“‘Cause I have, back when I worked in haulage a few gigs back from this job. Out there they’ve got fucking trams, fucking cycle lanes, fucking metro, fucking buses, fucking this that and the other. They know how to build a city; more civil. I mean wars and football aside, credit where it’s due, yeah?”

“A couple of trips up the autobahn and you’re Phillius fucking Fogg.”

For a moment neither spoke.

“Second turn on the left; Arley Hill we’re heading to.”

“Well I hope you bought the crackers ‘cause at this rate we’ll be there by Christmas,” said Gavin, laughing again and giving the steering wheel a hearty slap.

“It’s alright. I’ve got my own from home. The company ones are all knackered and sticky anyway. You bought the mallets, yeah?”

“Only the drone they sent up reckons this one’s quite prolific. We might be quite busy.”

Twenty minutes later they arrived at my front door, just as I knew they would: Gavin was middle-aged, burly, his ample gut barely contained within the polyester football shirt that stretched across it. Greg was younger, leaner—my age I guessed—but with the tell-tale signs of a poor diet and a persistent smoking habit. 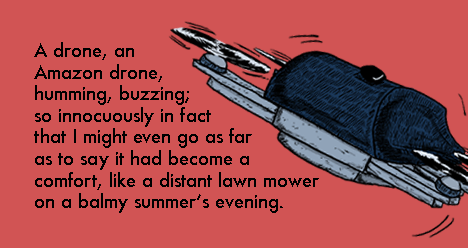 I saw the Amazon branded tablet in Greg’s hand. The van was parked up on the curb with the government logo on the side. I once again became aware of a sound I’d grown so accustomed to over the last two weeks that I no longer heard it. A drone, an Amazon drone, humming, buzzing; so innocuously in fact that I might even go as far as to say it had become a comfort, like a distant lawn mower on a balmy summer’s evening. I suppose a psychologist might have interrupted my positive associations with this representation of literary crypto fascism as a kind of Stockholm syndrome, an innate desire for justice, even at the expense of my own—

“What’s he doing?” asked Greg, peering at me with a bemused look.

“Do they always…think?” said Greg.

“I suppose you want to come in?” I said.

And so they came in. Gavin did a quick lap of the flat, arriving at my room and heading to the large pile of books in the corner.

“‘Spose you think that’s very romantic and bohemian, rejecting basic household furniture you can pick up for next to nothing from fucking Ikea?”

“Normally I just wait ‘til I find it on the street.”

Gavin didn’t even bother with a retort, but turned his back on me and made a hand gesture to Greg, who slowly began listing off names from the tablet. Gavin responded by pulling the relevant volumes from the pile.

I stood and watched for a moment, arms folded, feeling a prickly heat creep across my back and neck. “I don’t understand how you can tell. I won’t eventually get ‘round to reading them,” I said, trying to keep the tremor out of my voice. 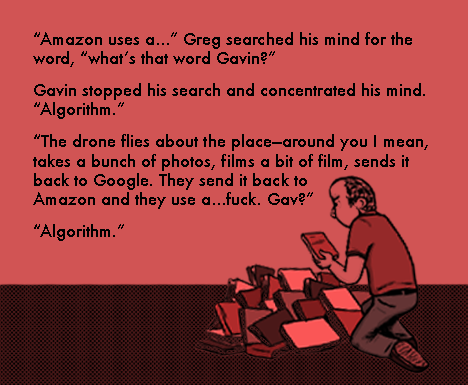 “Amazon uses a…” Greg searched his mind for the word, “what’s that word Gavin?”

Gavin stopped his search and concentrated his mind. “Algorithm.”

“The drone flies about the place—around you I mean, takes a bunch of photos, films a bit of film, sends it back to Google. They send it back to Amazon and they use a…fuck. Gav?”

“…algorithm to work it all out. They just know, basically—what books you got, how long you’ve had ‘em, and how much of ‘em you’ve read. It’s a fair system, foolproof, plus it works. A lot more reading being done since they introduced it.”

“Is that how you sleep at night, then, ‘cause a few more people are finishing whatever airport novel?”

The pair had stopped what they were doing and turned to look at me, the contempt in their eyes unmistakable.

“Y’know,” began Gavin, “I’ve got three books in my house; one about the mighty Chelsea FC, one about the SAS, and Fifty Shades of Grey because I’m an easy going kind of bloke, and the Mrs. enjoys it, and I’ve got no reason to be insecure so I don’t mind her having certain thoughts. And we read them all. They all get read and they’re all appreciated. She’s read Fifty Shades of Grey I don’t know how many times. Why would you buy something and not use it? Don’t you like books, John?”

“I like them very much. Books are enlightenment. They’re the foundation of our democra—”

“Spare me the BBC Four bollocks. Why not just buy them when you need ‘em?”

I could only muster a wearied shake of the head, as if searching for an explanation so obvious to a question so stupid it had temporarily escaped me. “I have a lot—there’s a lot of b —”

“When you buy a movie, do you just leave it in its cellophane?”

“How about music? You just buy these here records and not listen to ‘em?”

“You can’t possibly compare those two. It takes ages to read a book, and as a matter of fact, a lot of those are pretty boring actually. That Joseph Stiglitz?” I said, pointing to the copy of Freefall Greg had just pulled from the pile, “Jesus Christ, economics is tedious. And it moves so quickly. That’s already out of date.”

“Well, you’ve had it two years,” said Greg, turning his attention back to the tablet’s screen, “Seamus Milne, The Revenge of History. Jason Burke, 9/11 Wars.”

“That last one’s not even mine, and it wasn’t bought on Amazon,” I said.

“Well, it’s in the pile and it’s on the database, so it counts. It’s not just about what you bought. This is a government initiative. Amazon and Google are just doing a little pro-bono work for the cause.”

“Another nice fat government contract, you mean,” I said.

Gavin approached me, turning the last book over in his hand.

“We see a lot of people like you, John, ‘specially round these parts,” he said, now only a foot away from me. By the smell of his breath I guessed he’d had a Cornish pasty for lunch, the cheap unbranded kind you get at grimy motorway service stations. “And I reckon it’s less about what’s in these here books,” he said, waving the volume a few inches from my nose, “and more about what all the other Johns and Joannas you invite ‘round here think when they see those big fat books about this, that, and fuck knows what else. But this is beside the point. Greg, get the toolbox.”

Not a bad example of conspicuous consumption, I thought, as I sank dejectedly into a chair and Greg scurried back out the front door. “Why is it anyone’s business what I do with these books? What if I just wanted to press flowers in them or something?”

Gavin’s voice rose in pitch, the tone turned almost conversational. “It’s just one of those little political quirks, I think. Something to do with the publishers and the National Union of Teachers and The Green Party and The House of Lords and you put it all together and everyone has the best of intentions in mind and you put it in the oven and it turns out to be a fucking shit pie. Politics is weird sometimes, isn’t it?”

“Like communism,” said Greg, arriving back carrying a large metal toolbox as wide as his own torso, “I mean look how that turned out.”

“Exactly, nice idea until you wake up one day and they’re fucking invading Paris,” Gavin said.

They both looked at me. I stared back in bewildered confusion.

“Righto,” said Gavin, “so normally what we do now is give you a little test on one of these books, a formality really, to check you really haven’t bothered to read ‘em.”

“This one’s pretty thin,” said Greg with a solicitous air, “All Quiet on the Western Front.”

A bubble of optimism expanded in my chest.

“If he hasn’t read it, he hasn’t read it,” said Gavin. “It doesn’t matter how long the fucker is. Actually, hold on.” Gavin took the tablet from Greg’s hand, prodded the screen several times, and handed it back. “He’s seen the film of that, both the films, actually.”

“How the hell does it know that?” I whimpered.

“Why bother buying the book if you’ve seen the films?” Greg asked.

Despite my predicament, I indulged myself a swift roll of the eyes.

“Okay; this one,” said Gavin. “The Great Hunger, all about the Irish potato famine. I can’t believe you haven’t read this one yet, part of your family heritage and everything. And you’ve had it years.”

“How does it—?” I sighed, “Right. algorithms. Let’s just have these questions then.”

“Right, yeah, so…” Greg began reading from the tablet, “To the nearest three years, when did the famine known as The Great Famine, or The Irish Potato Famine, occur?”

I made a show of trying to recall a set of figures I’d never learnt. “Seventeen…”

“What the fuck! Surely there’s some kind of margin for error? What’s the pass mark?”

“The pass mark’s one hundred percent and you’ve fucked it up right off the bat. The easiest fucking one, too.” Labored chortles rumbled up from the depths of Gavin’s gut. “Not even the right fucking century!”

I shot out of my seat with as much middle-class indignation as I could muster. “Now I’m sorry, but this is really—it really is not—I know this is your job, your livelihood.”

“Sit down, Tony fucking Blair,” chuckled Gavin, “and put your hand on the table, palms down.”

I did as I was told. Gavin once again prodded and stroked and tapped away at the tablet. He stopped, studied the screen, and then rubbed his chin like an invoicing builder. “That all adds up to quite a lot, I’m afraid. You can say goodbye to all the digits on your left—good thing I bought my good pliers, ‘ey Greg?—and the use of both hands for at least a couple of months. Righty ho, then.”

Gavin placed the tablet carefully down on the desk and picked up one of the mallets. He raised it above his head, exhaled, and then stopped.

“Actually Greg, I reckon you should do this one. You might as well get some practice in.”

Greg beamed a smile as warm as the dampness that was at that same moment spreading across my crotch. A shadow appeared at the top of my thigh, expanded outwards, and crept down my trouser leg. 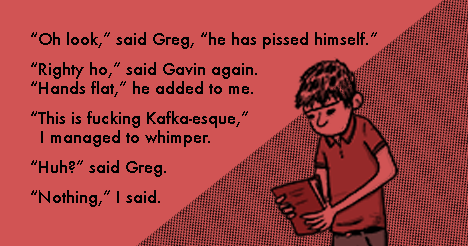 “This is fucking Kafka-esque,” I managed to whimper.

Greg reached the top of his swing just as I was making a mental note to order The Trial. Amazon Marketplace would probably have it, I reckoned.

Bristol really is this year’s European Green Capital and it really is a load of green bollocks. One of the sponsors is Airbus. As in the company that makes the planes that fly conscience-less twats from Cardiff to Birmingham however many times a day.

John Miskelly lives in Bristol where he can most likely be found walking or cycling about the place, usually to or from work or to or from some underwhelming event or gig. He might be in the Hillgrove pub, come to think of it. He writes irregular blog posts at http://www.protagonistcomplex.blogspot.com/ and an even irregularer zine called BonusCupped.

More of his short stories can be found on this very website.
Madeline
Michelangelo and Princess Elsa’s Christmas Play
Trickle Down
The Librarian
Soft Tissue
Tastemaker
Crunchem Hall
The Whistleblower