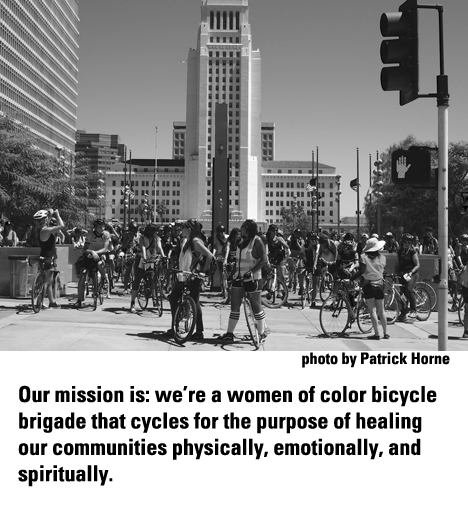 The bicycle: a tool for women empowerment, spiritual healing, and, of course, transportation. This is what the Ovarian Psycos—an all-women (and those who identify as women) bicycle brigade based in East Los Angeles and Boyle Heights—are all about. Razorcake got together with Jocelyn Hernandez, a psyco core member and their 2014 Summer season interim “Left Ovary” (meaning President) known as “Joss the Boss,” at Hermosillo Bar in Highland Park a week after their epic annual “Clitoral Mass” group biking event, where more than 350 women gathered to ride a thirty-three-mile-long course hitting all of the four corners of Los Angeles. We find out what they’re exactly about, what they will do, what they won’t, do and why “haters gonna hate and ovaries gonna ovulate.”

Javier: What are the Ovarian Psycos about?

Joss: We’re about a lot of things. It’s about women empowerment. It’s about using a bike as a tool to organize. Our mission is: we’re a women of color bicycle brigade that cycles for the purpose of healing our communities physically, emotionally, and spiritually.Also, it’s our fuckin’ form of transformation. We’re about sisterhood. I guess we’re a movement, from the looks of it. 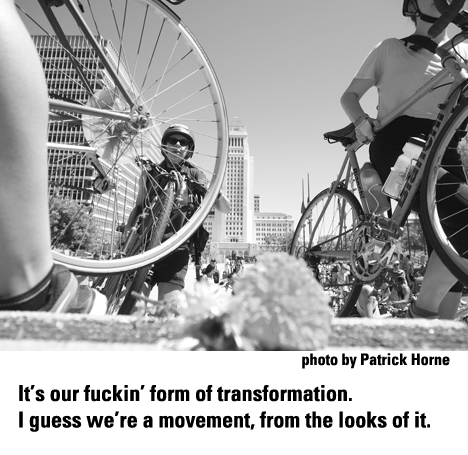 Javier: What kind of stuff do you girls do?

Joss: We organize monthly Luna Rides. That’s our one of our top priorities: to provide a brave space for women to start a healing process. For women of color, it would be historical trauma, five hundred years of fucked up colonization. We try to provide a safe space. Every Luna Ride that we have has a different topic. It’s a time to reconnect with the sisters and be able to set new intentions for ourselves, in order to heal from—fuck—from everything out there. From abuse, from alcoholism, from drugs, from domestic violence, from slavery.

Javier: Are you all female? Like, strictly no dudes allowed?

Joss: Yeah, at Luna Rides we don’t allow folks who identify as men. But we do allow folks who identify as women. We do have co-ed rides, which are every other month. Usually a day ride. But for full moons, it’s only for women identified. No men allowed on those rides! And that’s a mean ol’ issue too; people always hate on us for that. But whatever. At first we tried to explain—make people talking shit on Facebook understand—about what we do and we stand for. All we say is, “Haters gonna hate, ovaries gonna ovulate.”

Javier:  What do you girls stand for?

Joss: We stand for ourselves, our mothers, our daughters, the seven generations of people. What we do now affects the future and, in a way, affects our history and ancestors. In our handbook, the raw spirit of the psycos states is that we have feminist ideals, urban hood mentality (people like knuckleheads, cholas, punks), and indigenous understandings. A lot of us don’t have solid identities, so it gets confusing. This raw spirit helps us understand ourselves. 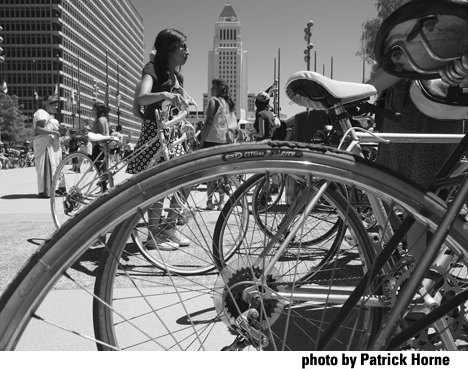 Javier: What is your official title?

Joss: We have roles and we alternate every season. I’m the Left Ovary and the homegirl is the Right Ovary, but we both do the same shit, which is basically to keep the girls on check. We have other pretty cool roles too, like the Clit Rubber, which is basically the Human Resource person for the Ovarian Psycos. They make sure that the sisters’ health is okay, spiritually, emotionally, and physically. We’ll have clit-rubbing sessions every once in a while. Like, if somebody is feeling down, the Clit Rubber will come down and rub their clit! Not literally.

Javier: How did the Ovarian Psycos form?

Joss: We formed in the summer of 2010. The person that founded it was Xela de La X. She’s actually a female emcee. Her name is Cihualtce, which means “woman” in Nahuatl language. She formed it because she felt there was a necessity. We wanted to ride, since most rides are very male dominated. We had our first meeting at Corazon del Pueblo in Boyle Heights. I got sucked into it and got inspired to move it forward since then.

Javier: Tell me about some rides. Has anyone ever been arrested? Any funny stories?

Joss: There are lots of accidents. At the Luna Rides, we encourage a lot of people who don’t normally ride to come out. So women will show up excited, usually borrowing their neighbors bike to ride with us, and they’ll just get dropped off. But they’ve never really ever rode on those bikes before. They get an immediate flat tire, or the gears don’t work, or something like that. But we always stay and fix every bike before we leave anywhere. It encourages women to own a bike and we put a tool in a sister’s hand to encourage them to fix them on their own. It’s kind of funny, but certain people don’t know.

Also, during the first Luna Ride that we did, our founder, Xela de La X, fell down and cracked her head and was in the hospital. That shit was crazy. We called it the Luna Death Ride after that. It was wild, but it happens.

I think the funniest thingthat turns out really, really wellis that the homegirls who dated the same dude show up at our events. But instead of awkwardness, it’s all very cool. No one snaps on each other—the energy is always so awesome. When you got movement, the stress levels come down. It’s great. 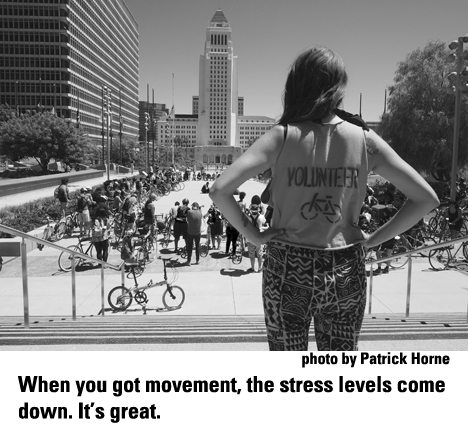 Javier: You recently had your annual all-women group bike ride, Clitoral Mass. How did that go?

Joss: Around two hundred people showed up at first. More and more people slowly trickled in throughout the ride. It was thirty-three miles long and it hit all four corners of Los Angeles. The Glendale pit stop was the best. This local cumbia band, Buye Pongo, played an acoustic session for us. The sprinklers were on and everyone got wet, the girls were just taking off their shirts and having fun. At the end, some of our male allies said they counted at least three hundred and something people in total. There were some dudes crashing the ride, too. Some women brought their boyfriends. It’s cool, I get it.

The next Clitoral Mass is next summer, sometime in August.

Bio: Javier Cabral was born and raised in East Los Angeles (east of Boyle Heights, East L.A., West of City of Commerce, not Silver Lake or Echo Park) and has been writing professionally about food, fast music, and Mexican culture since he was sixteen. He writes for Los Angeles Times, Los Angeles Magazine, KCET, LA Weekly, and Saveur Magazine. Read his archives here. 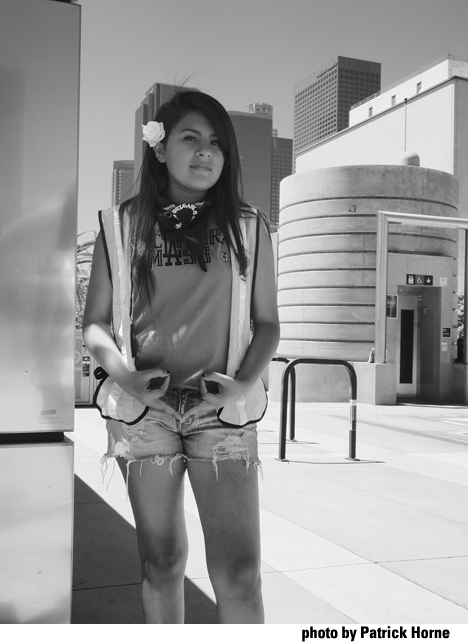