It was a warm and dry Thursday night in ugly San Bernardino, CA, and the friendly local demons known as The Order Of The Fly played an awesome show for all thirty-eight people in attendance. Apparently, this show was put together on very short notice because one of the members, Tom, was moving away and the band wanted to play together one last time. It was a long line-up, and a long night, but those of us who stuck around until 1:00 AM were treated to a hard-hitting, frenzied bout of melodic punk/metal. Even The Venue’s little dog mascot was inspired to jump onstage and bark at the moon with the skull-faced musicians.

The Venue is a nondescript, no-frills location safely off the beaten path in a dusty, industrial section of San Smogadino. It’s a medium-sized warehouse that offers bands a place to practice and play live gigs, and the door prices are ridiculously low. The acoustics are not the best, but what the hell…we need more places like this where people can enjoy truly alternative music in a permissive and friendly setting that has only one rule: Don’t be a dick. I strongly recommend that any band that wants to play should contact Frank at The Venue and everyone reading this should keep an eye on The Venue’s bill and support the local Inland Empire music scene. www.myspace.com/thevenuerialto

First on the bill was Wreckin’ Katz, a psychobilly band from Fontana that did a rather good job of upholding that genre while leaning decidedly more toward the punk spectrum. Nothing too fancy or unique here, but the young members of this enthusiastic and sincere trio gave it their all for an enjoyable set full of power chord intensity backed by the good ol’ stand-up bass and solid drums. These guys have a lot of potential and have good stage presence. Vince, the bassist, is quite a gymnast; he often balances his entire body while standing on the side on the side of his oversized instrument as he plays. Good sound and I look forward to hearing a bit more diversity of arrangement in the future…give ‘em time…they’re still young.

Bad Form was a quartet of good tunes stemming from somewhere in O.C., in the grand and glorious deathrock tradition with a hint of Legal Weapon in the vocals, a dash of Rikk Agnew in the guitar, strong bass lines, and solid drum work. Vocalist Allegra has an amazing voice. Strong and slightly husky, but still entirely feminine, it was her siren call that brought me back inside. No wonder, her mother is a classically-trained opera singer and her tutelage was coming through loud and clear. Yes, this is another great unknown playing amazing music in the shadows. The guitar work is thick and grungy, with succinct fills (not leads), put in exactly the right place before the rest of the sonic phantasmagoria comes back together to cover our living corpses with the dust of the musical erotic. Oooo! I think the band’s cover of Bauhaus’s “Bella Lugosi’s Dead” is just as good the original. Bad Form is definitely worth your time and attention: www.myspace.com/reallybadform

Leper was a goth metal trio from Chicago. Nice guys, but I wasn’t feeling it very much. Sorry. They put a lot of energy into their echo-filled performance and the haunting melodies occasionally drew me in, but it never captured my spirit. I found this band to be paradoxically intriguing, yet irritating. Maybe you will enjoy this more than I did: www.grrrrecords.com/leper 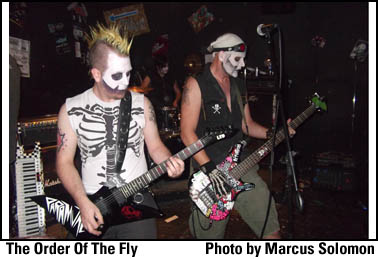 The Returners were more to my liking. Even though I think The Misfits is the most over-rated band in punk history, it has still influenced many worthwhile bands like this one. Listening to and watching these four talented lads energetically jumping and beating the hell out of themselves and their instruments, I thought maybe they should change the band’s name to “Thrashain.” Everything was big, loud, and jackhammer strong, especially the drums, which were primal, precise, and full of death-rocky mournful strength. Even though there was only an audience of eighteen inside The Venue at the time, every member gave an effort of 110%. I watched the vibration of a plastic water bottle sitting in front of the bass amp and it buzzed so much the water looked carbonated. The tempo changes were well-placed, serving to allow the band and audience to catch its collective breath before another full-on aural attack. My only complaint is in regard to the over-abundance of the “Woah-woaaahs” in many of the songs. Break free kids. Don’t be too bound to your influences. The band is looking for a new bass player too: www.myspace.com/thereturners13

Finally, at about 1:00 AM or thereabouts, San Berdoo’s favorite monster squad took the stage. The five skull-faced entertainers known as The Order Of The Fly conjured almost forty fans from the seemingly empty darkness. It was a fucking blast! Looming, giant Ralphie Repulsive led his gleefully evil cohorts in musical mayhem through a set that was well over an hour long. Usually, the band puts a lot of effort into decorating the stage with lots of wicked imagery, but not on that evening. No, the focus was on the music, the small, but tight cadre of true fans and farewell homage to their dear fiend…um, friend Tom, who had to leave the band. Standout tunes included “Rot,” the cover of Adam And The Ants “Beat My Guest,” the cover of Falco’s “Rock Me Amadeus,” the intensely driving, rapidly pulsating “Breathing Liquid,” and the very Melvins-like “Vampire Killers.” While the fist-pumping fans lining the stage chanted “You suck! / You suck!, the club owner’s small dog got up on the stage and began happily barking along while looking directly at Ralphie. The animal was clearly possessed. I don’t remember everything that was played, and my notes took a backseat to the Captain Morgan, but I do remember it was all pretty damn great and for days afterward I had the song, “Who Do You Think We Are?” stuck in my head. “We don’t care / We don’t care…”
www.myspace.com/theorderofthefly