Tuesday nights are a drab. There’s usually fuck-all to do except for maybe getting cheap tacos or just bumming it at home. The weekend still seems too far away, Saturday was just a few days ago, and the main thing we have to look forward to is that it’s almost the middle of the week. Yep, Tuesday nights suck.

Then again, sometimes they don’t. Every now and then a gig comes up with such a great lineup of local bands and a killer touring band. It doesn’t matter if it’s in a city you’ve never been to, at a place you’ve never heard of, or if you’re going alone. Sometimes you just got to go. So I made the thirty-minute trip to Mid-City in Los Angeles.

The gig was held at Space 42, a relatively new place for punk shows in West L.A. Space 42 follows the cardinal  rule of DIY spots: keep a low profile. The building itself is adjacent to Venice Blvd. Away from prying eyes, its blue façade is quaint and unsuspecting. I wasn’t at all surprised to find out that the building was a former medical marijuana dispensary. All good DIY spots used to be something else. I walked up a driveway—my bag heavy with some zines, beer, and a camera—paid my six dollars, and waited for the first band to start.

Hawthorne’s Dead Squad opened the show to a decent sized crowd. It’s hard to peg down their sound to a specific genre or band, which is a good thing. They have tinges of oi, late ‘70s punk, and garage, all through a lo-fi filter. Despite a few hiccups, their set was solid and the crowd was bobbing their heads and tapping their toes. Dead Squad started as a three-piece where guitarist Toby had vocal duties. Those were the more garage/punk rock-sounding tunes. Then singer Pipi took the mic. Her harsh, high-pitched vocals gave songs like “Antisocial” a bouncy oi feeling to them. I look forward to seeing how this young band progresses. 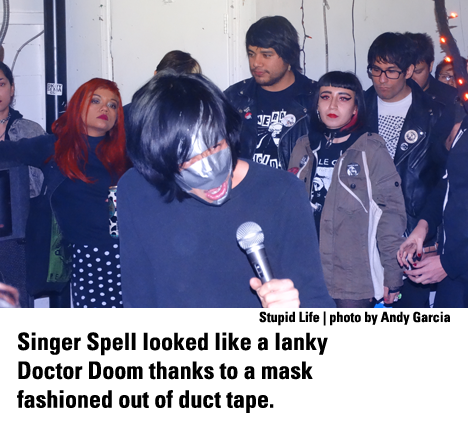 I love dumb, silly punk; the kind that sucks the agro out of a room with its cretinous lyrics and makes everyone jump up and down like a spazz. In their year of existence, L.A.’s Stupid Life has got this down Their racket consists of Japanese noise-punk heroes The Swankys formula of simple 1-2 kick drum/snare combo with plenty of tin-pan drum rolls and a spunky bass that would make the dead pogo. For four dudes with no artificial noise or collection of pedals they cause quite a commotion. Nothing serious about this band other than they’re really good. Singer Spell looked like a lanky Doctor Doom thanks to a mask fashioned out of duct tape. Drummer E. Rock’s crashed cymbals. Ear Bean’s plucked the bass. Pretty P hastily pulled his guitar strings and made him look like manic marionette, forcing him to flail. Limbs a strew, he skipped and hopped across the dance floor. Their set, like many of Stupid Life’s songs, was short and punchy—just how I like it.

When Stupid Life finished I took some time to take in the inside of Space 42. It’s a small room that’s no bigger than an average living room. With the exception of some color from light graffiti, there are four plain walls decorated with strands of single-color Christmas lights. A black curtain separates the inside from the outside parking lot. The lot was where most people were hanging out, smoking and drinking. My bag was getting heavy so to lighten my load I cracked open another beer, which, thanks to Stupid Life, was very much shaken up. I apologized to the person next to me who had some of my beer on their sweater and went back inside. 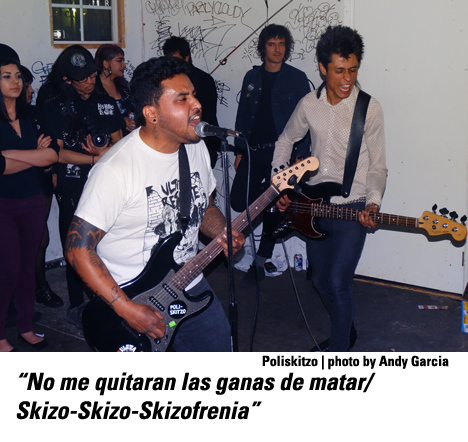 A local band that I’ve admired for a long time but for whatever reason have never been able to catch live was setting up. Poliskitzo has been around since 2009 and have put out a few tapes and vinyl on great labels like Silencio Statico and Todo Destruido. Aside from Orden Mundial, Poliskitzo were my favorite act of the night. We’re fortunate enough in L.A. and Southern California to have a lot of really good bands, but I think Poliskitzo stands out. They’ve been one of the more rhythmic and soulful bands around and I was really excited to finally catch them live.

Guitarist and vocalist Gabriel’s crooning was on-point whether he was belting out lyrics in rapid succession like on “Skizofrenia” (“No me quitaran las ganas de matar/ Skizo-Skizo-Skizofrenia”) or beckoning the crowd to sing along to “En las calles nos llaman/ desconocidos!” during“Drum Solo.” He really digs deep inside when he sings which gives the lyrics extra feeling and weight. Bass player E.T. Skitzo twitched and grimaced as he plucked his bass and sang along. Eddie, the drummer, produced some killer beats, not missing anything. It was hard to grasp that this music was coming from a three-piece.

Polisktizo creates something really unique that translates very well live. In the beginning of their set I was able to stop bobbing around a few times to take some pics but still managed to come out with half a dozen blurry ones. At that point I just pointed my camera in their general direction and shot blindly. I enjoyed them so much I didn’t realize my camera had run out of juice halfway through their set. They were great. Live, Poliskitzo puts out a strong energy that makes one want to dance and sing along instead of running in a circle. I’m glad I was finally able to see them and can’t wait to catch them again. I walked outside with a big smile, still singing along to Poliskito in my head.

Unfortunately my camera was dead and the only other thing I had was my phone. It was going to suck to try to take pictures of Blazing Eye and Orden Mundial with my Blackberry (remember those?). The only thing left to do was to make things harder on myself and drink a warm beer while I waited for Blazing Eye to come on. 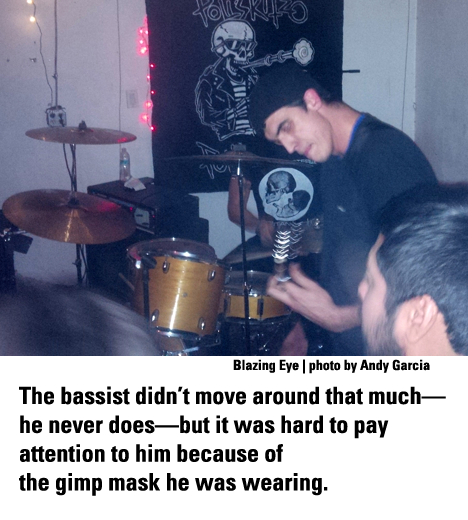 L.A. juggernauts Blazing Eye stirred shit up. It was impossible to, at the very least, not pump your fist and bang your head to their raucous L.A. brand of Kyushu-noisecore with its gruff vocals, heavy bass and drum, and crude unrelenting guitar. I’ve seen them a few times and they’ve never let me down. Austin’s vocals are insane. He was really animated, bouncing around in front of the crowd and standing on top of a mini-amp, bellowing out the words to songs like “Humiliation” and “Kill You.” At one point he ended up on the floor writhing.

The bassist didn’t move around that much—he never does—but it was hard to pay attention to him because of the gimp mask he was wearing. How he could play in that small room with all the body heat and musk generated from bodies hurling across the floor is beyond me. His stoical presence really added to the overall vibe that Blazing Eye put out—one of desperation, desolation, and oblivion. Guitarist Sam frantically smashed on the chords—keeping up with the chunky bass and hammering drums—creating just about the best fucking sound ever. They played nearly every song from their demo and 7”, along with a new song. I didn’t get the name of it, but it was slower than their other stuff but just as good.

I’ve always been fascinated by punk that comes from an island nation (not counting Great Britain). The first time I heard Australian punk, it blew my fucking mind. How does punk get in, or out, for that matter? Just as important, what place does it have in that society? 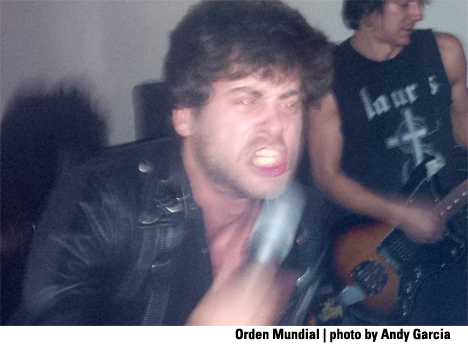 Orden Mundial is from Mallorca, Spain, an island in the Mediterranean Sea. They formed about four years ago when local hardcore act Cop De Fona called it quits. Orden Mundial consists of the exact same members of Cop De Fona except each member took on a different duty, creating a more frenzied sound.

Despite the hostilities, Bernat says the punk scene in Mallorca is great and locals feel privileged. This is not the case in other MediterraneanIslands he has visited.

There is an ambiguity to Orden Mundial, from the aesthetic of the band—one of their logos is a black mask with a cryptic expression—to the band name itself; Ordern Mundial means “World Order” in English. Not “New World Order” or anything like that. There’s nothing that modifies the order they’re talking about. “Orden Mundial debería significar cualquier modo en que el mundo funciona, se organiza, hace referencia a sus impulsos,”said Bernat (Translation: “‘Orden Mundial’ refers to any way the world functions, is structured, and also alludes to its compulsions.”) “Cuando hablamos de mundo hablamos de realidad, de todo aquello que existe.” (Translation: “When we talk about ‘the world’ we refer to reality, to everything that exists.” Their sound reflects the world they speak of.

This was Orden Mundial’s first U.S. tour—hitting both coasts and a few stops in-between—and there was a really good turnout for this particular gig. I think a common misconception of punk is that if there is no pit or bodies aren’t slamming then the crowd isn’t enjoying the band. Sometimes you’re just watching a band and you stand there, kind of stuck, with your eyes glued to what’s in front of you. That’s what I noticed that night, and I can say for sure it wasn’t because the crowd wasn’t digging them; it was because they were thinking “Holy fuck.” That’s what was going through my head throughout their set. It wasn’t some gimmick or excess that caught people’s attention; it was because they were just that damn good. The half-circle of people in front of the band grew denser as they played and bodies started moving.

Singer Bernat paced slowly on the dance floor, stuck his neck out at the crowd, shouted lyrics in Castilian Spanish to songs with titles that translate to “Empty Youth”, “Worms”, “They’re Ghosts”, and “Open Grave”. Guitarist Jauma looked like he was beating his guitar into submission—just hacking away at it—producing some killer riffs and feedback. Rafa pounded the kit, his head bobbing with each strike, joining in on the chaos. The chunky bass kept everything stacked. During my favorite song Bernat seemed to dig his heels into the ground, and with composed fervor yelled out, “Te arastras por el Suelo/ Te Revueltes entre ti mismo/ Gusanos! Gusanos!” (Translation:“You drag yourself across the floor/ You squirm/ Worms! Worms!”)

Orden Mundial is not looking to provide answers. Their lyrics aren’t essays and they aren’t interested in preaching. They’re more interested in asking questions, said Bernat. “Escapamos de interpretaciones fáciles, pero bueno, damos permiso a que cada uno lo asuma como quiera. Lo que nos gusta con la banda es invitar a la reflexión…”(Translation: “We stay away from the obvious, plus everyone has their own interpretation of things. We like to get people to reflect.”) The crowd did just that. Those who knew the words sang along, and those who didn’t paid close attention. A band is doing something right when, in the midst of disorder, people are interested in hearing what each song has to say. Orden Mundial accomplished that on this night.

After the show I was able to briefly speak to Randi and Marina, two members of the Mamira co-op, who run Space 42. Their unchecked enthusiasm, along with that of all the bands and the crowd left an impression on me. The night was flawless; no fights and no fuzz. Southern California represented hard and Orden Mundial brought the goods. It was a victory for the punks, on a Tuesday night no less.

Andy Garcia is a South East L.A. native who enjoys shootin’ the shit.

Who Is Lydia Loveless?: DVD

BAD SIDE: Everybody Wants Something from Me: 7”