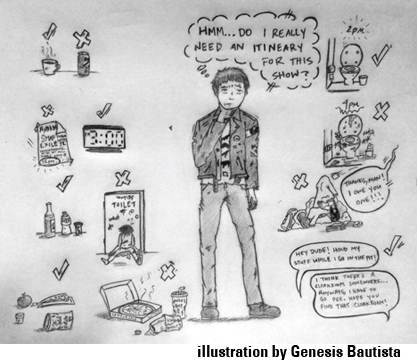 One Punk’s Guide to Surviving an All-Dayer: Booze. Food. Defecation. It’s all here.

All-day punk shows are a bit like a visit to an all-you-can-eat buffet—grotty, over-indulgent affairs with the potential to leave the punter both spiritually unfulfilled and more than a little gassy. Strategy and discipline are required if an all-dayer is to be enjoyed and not merely endured. Here are some pointers to turn your event into a pleasurable and worthwhile social experience and not a harrowing shit-show of regrets. 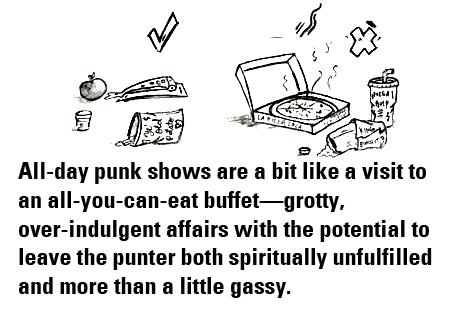 I understand I’m probably about to insult more than a few people with the following statement but I’m crediting you with the required amount of adult objectivity to take it as the empirically provable statement of fact that it is: The first few bands at an all-day gig are almost certainly going to be bad. Apologies again if I’m soiling your otherwise utopian perception of punkdom, but even in this universe of egalitarianism and cooperation there is hierarchy, most notably at the gigs themselves. The “better” bands that the majority want to see are saved until last, and the “weaker” ones go first. How often does one go to a regular show with a three or four band bill and find one or both of those first supports to be—how should I say—severely fucking lacking? Now apply that same logic to a bill of twenty odd bands and you’ll understand where I’m coming from.

(I understand there are exceptions—you’ve probably read articles in The New York Times or The Guardian by old hacks reminiscing about the time they saw [insert legendary band of yore] open for [insert forgotten band of yore] in a laundry mat back when said hack’s writing was still relevant and not consumed almost wholly by middle-aged middle-management suburbanites in faded Sham 69 shirts who still insist to their teenage nephews that they know a fucking thing about the underground—but they are exceptions to the rule. They are rare to the point of negligibility, and often, I suspect, embellished. If those early bands are good, the promoters and scene nerds who’ve turned up early will notice and word of mouth will work its magic—it’s what punk’s relied on since day one. Also, every band should play to an empty room. It’s a rite of passage and I wouldn’t trust a band that hasn’t. So in a way, you’re doing them a favor. Kind of.)

So arrive at a decent hour. Get there too early and you risk burning out before any bands you actually want to see have even played, standing at the back of the room like a crooked old pensioner wishing the minutes away until you can escape to your bed, only sticking around out of a strange sense of misplaced scene loyalty. Meanwhile the folks who rose late, had a leisurely wank/fudd, a hearty brunch, and watched a bit of Football Focus on BBC One are down the front still radding outwith a fury that only hell knoweth.

If you need a lift, have a coffee. Do not have a branded energy drink, because that would make you a twat.

Probably the hardest thing to get right at an all-day event. First things first: take it easy. It sounds obvious but when you’re hanging out, cold chillin’, meeting up with some old friends, and pouring over the day’s schedule, those pints go down way too easy. Check yourself. Leave gaps between rounds and let your liver and guts do their thing. Don’t be that person, curled up against the bar like a Victorian street urchin, who everyone silently pities when stepping over to get to the shitters. Drink water throughout the day and bring some ibuprofen; it’s really easy to fall into that woozy, woolly-headed no man’s land between hung-over and still drunk, kind of headachey and lackadaisical, and well on the way towards becoming the anemic old fuck I mentioned earlier. Most importantly of all, don’t be that mean-spirited drunken cruster who staggers around the venue insulting everyone and making everyone ill at ease. Another option is not to drink at all, of course. 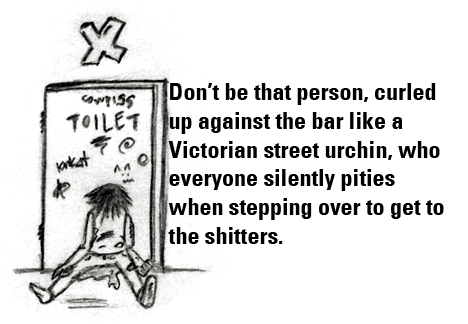 Eat some food at some point, but preferably not so much that it’s going to make you all bloated and sluggish and icky-feeling. A whole pizza, for instance, probably isn’t a great idea. Neither is a three-meat burrito the size of a shell casing which you’ll most likely see again, an hour later, in semi-digested form, splashing like a rainbow torrent of gross all over the lead guitarist’s peddle-board.

Alcohol is a stomach irritant. Coffee is a stomach irritant. Even some bands are stomach irritants. At some point you may need to drop stool. The sooner you can do this the better. No matter how well prepared the venue might be and as immaculate as those toilets seemed at two o’clock in the afternoon, come early evening they will have descended into a faecal nightmare of Lars Von Trier proportions. DO NOT PUT IT OFF. Soldiering on all steely-jawed and noble like you’re holding in a fart at a funeral, get it done while there’s still some toilet roll left. Not that you’d be stupid enough to leave the house without a few sheets tucked away in the pocket of your jeans, or under your ironic Clear Channel trucker cap. 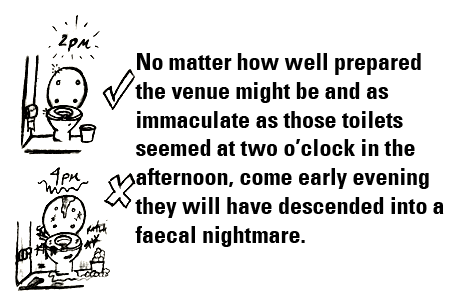 Have a Wander Round Outside

This could easily be combined with your food run. Spending all day in a large building with people getting steadily drunker and more raucous can sometimes feel a bit like a post-apocalyptic Battle Royale scenario, a punk rock High Rise chamber of madness. Stretch your legs and go for a walk outside the venue, observe that the world is still plummeting towards consumer capitalist doom at its usual rate, then head back inside for some more super happy fun time action.

Have a Nice Sit Down

This is one for the promoters to consider—provide some seating. Standing around on your spindly, emaciated legs all day can be really tiring. Have a nice extended sit down. If the seating’s set away from the stage/s, you can use the time to have a civilized chat without the need to bellow directly into your friends ear like a Nazi interrogator. If there’s no seating in the venue, scope out the local area for a good pub or bar and take a breather in there.

If you are in a group and the only one with a bag then you will inevitably become the group mule, carrying everyone’s outer layers, sweat-shop merch, zines, records, and every other regrettable impulse purchase your stupid friends have made in their over stimulated “gettin’ my DIY punk lifestyle conspicuous consumption on” state of brain. If facilities exist, splash out on a cloakroom ticket and remove any burden of responsibility for other people’s junk. If you’re at the type of event where the machismo hierarchy of inconsiderate assholedom euphemistically known as “the mosh” may occur and that kind of thing doesn’t appeal to you, then I’m afraid there’s a distinct chance of you becoming The Bag Tree: “Can you just hold onto my and our six friends’ bags for a bit while we go and jump on someone’s head?” There’s not really any remedy I can think of for this other than get better friends or politely direct them to the cloakroom. 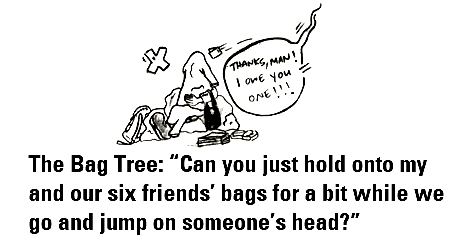 You know how sometimes you only feel motivated to exercise right after doing exercise? Well the same can apply for shows; sometimes the best remedy for all-dayer-induced fatigue is to “run it off”. Get down the front and coax some dopamines and adrenaline into your blood stream. Have a little sing and a pogo. Chances are you’ll come out refreshed and re-motivated, ready to do the same for the remaining bands.

For a small time DIY promoter, putting on an all-day event is probably a bit like organising a wedding, except with an even tighter schedule, multiple brides/grooms, and not so fucking lame. I say “probably”—I would never attempt such an undertaking because I am not a sadomasochistic courter of disaster and pain. Keep this in mind when you’re whingeing about a band starting five minutes late, or the venue being too hot or too cold, or the PA crackling, or there not being enough seating, or any other petty shit your mind might think up as an excuse to whine like the petulant Western asshole you are.

Don’t shoot heroine on the doorstep of the venue at one in the afternoon in front of a street full of weekend shoppers. It doesn’t look good and the venue will reap a whirlwind of shit from the man.

Okay that’s it, have fun.

John Miskelly is twenty-eight and lives in Bristol, UK. He has the professional “skill set” of a toddler and the energy and drive of an eighty-year-old. He’s not completely washed up yet, but he is bobbing around in the shallows like one of those drowned guys on Omaha Beach. He writes irregularly at http://www.protagonistcomplex.blogspot.com/ . His short stories can be found on this site.