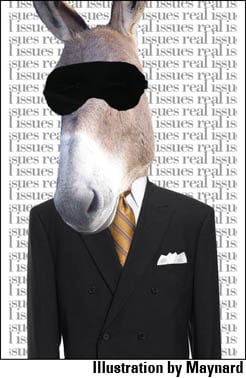 On the Worthlessness of Politically Correct Liberals: December 2009

The economic crisis shattered conservative mythology. However, it also revealed the emptiness of politically correct liberalism. The flaws of both viewpoints were evident back in 2002, when the seeds of our current troubles were taking root. President George W. Bush was preparing to march America into an Iraqi quagmire, justifying the invasion with falsified intelligence reports. In the domestic sphere, the national debt, trade deficit, poverty rate, and college tuition were on the rise. Some economists, pointing to high mortgage debt, warned of a housing bubble that threatened the entire economy. In response to the grim numbers, the administration drafted a second budget-busting tax cut, aimed chiefly at the wealthy.

The results are plain to see, but while the nation was headed down the primrose path, what was the response of that famed liberal bastion, The New York Times? On Iraq, the paper’s editors faithfully re-printed the lies of administration officials, and even claimed those spoon-fed falsehoods were “investigative journalism.” On the home front, one issue especially drew the Times’ attention and anger: Augusta National Golf Club’s membership policy. The club, which is made up of absurdly rich men, refused to allow absurdly rich women to join. It is difficult to imagine a subject less relevant to the lives of most Americans, but, for the NYT, it overshadowed nearly every other story.

In June 2002, feminist leader Martha Burk began her campaign to convince Augusta National to admit women. During the subsequent twelve months, the Times published over one hundred articles on the dispute, calling it a struggle for “social equality” against representatives of “the plantation era.” Few topics have received such lavish coverage. The controversy culminated during the Masters golf tournament at Augusta in April 2003, where Burk led a protest of nearly forty people. Even the Times had to admit that the demonstrators were “vastly outnumbered by police officers and reporters.”

The scene made a bizarre springtime tableau, but it was the defining portrait of the American news media, and especially its liberal segment. Less than a month earlier, with the NYT and other press heavyweights leading the cheers, Bush had commenced his war for oil profit in Iraq. Sure, corporate media failed to question whether Iraq actually posed a threat to America, but give them a really important story like country club membership and they’ll cover the hell out of it.

Ratcheting up the irony, Martha Burk tried to use the war to make her campaign relevant. “It’s appalling,” she said, “that the women who are willing to lay down their lives for democratic ideals should be shut out of this club.” She apparently forgot that military personnel are overwhelmingly working class. Even if Augusta began granting membership to women, the only way a female Iraq War veteran could join would be if she won the lottery enough times to buy a Fortune 500 company.

Like its favorite activist, The New York Times operates in a bubble of clueless privilege. During the same period as its 100+ stories on Augusta, the Times published only about one-fourth as many articles mentioning the nation’s rising poverty rate. Another apt point of comparison is the 1991 fire at the Imperial Food Products plant in Hamlet, North Carolina. It was one of the worst industrial disasters in U.S. history: twenty-five workers died and fifty-four were injured due to unsafe conditions at the factory. (Many were trapped inside because the exits were illegally padlocked shut.) However, the NYT printed less than one-fifth as many articles on the Hamlet catastrophe as they did on the Augusta feud.

So here’s a math question. If the Augusta spat was five times as worthy of TheNew York Times’ attention as a preventable industrial disaster that killed twenty-five workers, how many workers would have to die before their story deserved as much coverage as Martha Burk’s putting-green crusade?

As the actions of the Times and its allies show, many well-to-do liberals are ignorant—if not actually dismissive—of the lives of working-class people. American liberalism has been locked in a frivolous, politically correct phase for over a generation. Political correctness reduces social questions to mere symbolism or to “reforms” that only affect the wealthy. In addition to parodies of the Civil Rights Movement such as the Augusta campaign, PC obsessions include censorship and rigid, but selective, speech codes. (When did you ever hear a liberal object to the term “white trash”?) It’s great to oppose racist and sexist epithets. But when you ignore issues like wage stagnation, declining social mobility, longer workweeks, and unsafe work conditions, you reveal your political stance for what it is: a pose.

The blinkered PC perspective is a consequence of the growing gap between the social elite and everyone else. One aspect of the problem is the ongoing frenzy of corporate mergers. The country’s news organizations are now owned by some of the richest multinational corporations: General Electric, Disney, Viacom, Microsoft, Time Warner. Those companies share the same interests as other powerful corporations—especially the ones that advertise with them—and they shade their news coverage accordingly. One reason why news agencies generally ignored the housing bubble (until too late) was the huge influx of advertising money they received from banks and mortgage brokers. The media’s unshakeable faith in NAFTA and most-favored-nation trading status for China is also easily explained, once you follow the money.

Likewise, leading politicians, journalists, and other “experts” are mainly drawn from exclusive private colleges, which have always served as havens for the rich. Numerous studies show that the percentage of low-income students at top colleges has fallen sharply since the mid-1970s, due to rising tuition and stagnant wages. (If that bothers the politically correct liberals who run most U.S. colleges, they conceal their unease very well.) As a result of social exclusion on campus and in society at large, news bosses are great at presenting the views of posh citizens, both Democratic and Republican. However, they are less able to imagine financial hardship, being trapped inside a burning sweatshop, or dying in a needless war because military enlistment offered the only means of paying for college.

Though the media chiefs don’t realize it, the issue of the day is working people’s struggle for survival. We won’t make any real progress until we reject the ideologies of the elite, whether they are labeled “liberal” or “conservative.”