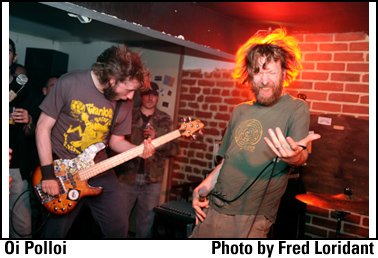 Formed by a handful of Scottish schoolkids in 1981 who were tired of the Pink Floyd cover bands playing the school talent shows, Oi Polloi has been blasting out their Crass-inspired anarcho-punk for almost three decades. Mixing heavy doses of politics, humor, and whiskey, the band has gone through several line-up changes while managing a steady stream of releases (over a dozen albums and another dozen EPs). Last year, I met up with Deek, singer and founder, and we headed out to a park in the middle of Edinburgh with several bottles of cider. After four hours, the batteries died on the recorder. Much of the edited interview can be found in issue #55 of Razorcake, but here are some exclusive bits for your enjoyment.

Kevin: Your album Unite and Win was a brilliant tactical move: a leftist/anarchist Oi album aim at skinheads that might otherwise find right-wing fascist Oi bands like Skrewdriver attractive. What was the response?

Deek: We got a lot of shit for that record from punks saying, “That’s fucking skinhead shit.” But we’d already done a couple of records about nuclear power and vivisection, and we could go the easy route and say the same kind of stuff. People would have slapped us on the back and said, “Well done,” but it might not necessarily of had the same effect as this stuff. And that song “Commies and Nazis” has been misunderstood from time to time. For that reason, we haven’t played it for decades because it maybe wasn’t expressed in the best possible way. It was about these groups that kind of preyed on the whole punk scene. Groups like the Socialist Workers Party, a group who I totally fucking despise. You would see them every time there was some kind of struggle going on that needed support. As anarchists, we would be there because we wanted to support the struggle. But the SWP were totally the opposite. They didn’t give a fuck about the specific thing that was going on. They just wanted to sell more papers, sign up more members, and it was really, really fucking nauseating.

Kevin: Have there been any major disagreements in the band about the political message of the songs?

Deek: There’s been general agreement on most everything. I can’t really think of anything were there’s been a big debate about lyrics. The only thing I can remember when we actually had a big heated discussion and some serious disagreement was with a song on the Mind the Bollocks 7”. The whole 7” is about sexual health but from a male perspective. There’s a song about prison rape on it called “Violation.” When we recorded it Ricky did a couple of screams in the middle and I think they are really chilling and quite effective. But after thinking about for a while, he just thought, “No, I really don’t like that, I’m not comfortable with that and it’s a really sick thing to do.” I thought it fit really well and made you get a shiver down your spine. It wasn’t meant to make you feel good. Although we disagreed about it, we obviously can’t bring out something that someone is unhappy with. So we brought out a version that didn’t have the screaming in it.

Kevin: You talked about how the band’s decision to write new material almost exclusively in Scottich Gaelic has had a mixed reception. I find it interesting that some in the Gaelic/Celtic music scene have trouble accepting the music as “Gaelic/Celtic” because it doesn’t fit into the traditional assumptions about musical styles. But you must be very used to that kind of debate because the same happens in punkwith the whole debate about authenticity.

Deek: Yeah, I mean with the punk thing everyone has their own definitions of what it is. But some of these definitions are so ridiculously narrow. But amongst the punk scene our Gaelic stuff was very well received. People thought it was really cool that we were singing in an indigenous language. Interestingly enough the places where it was not well received were places that had quite a lot of English people. They would be saying “We can’t understand this,” because as people who have English as their native language—in the States and the U.K.—they expect everything to be in English. But it shouldn’t and doesn’t need to be like that. When we go to other countries, we always try and learn a little bit of the language to show a little respect. There we are and it’s fucking embarrassing that they can speak our language and we can only speak a few words of theirs, like “cheers” and “thanks very much.” But people really do appreciate that.

Kevin: So when you’re touring Europe, how are tours organized?

Deek: In Germany, you have a lot of autonomous youth centres which are usually totally organised by the kids; not all of them. Some of them are still organised like anarchist centres but are very much funded by the state in a kind of “give the kids something to do and keep them off the streets” way. Usually, the kids who get involved in running them are political punks. Although, sad to say, apparently, in the East of Germany you get these fucking Nazi autonomous centers. Germany is mostly squats, youth centres, and autonomous centers. Its not very often that you are playing in some commercial bar unless it’s a bar owned by punks. In France, some squats and some bars. Spain, a mixture. Poland, also some squats, some bars, some clubs. Every country has its own little peculiarity but very different from Scotland. We always feel very envious and think, “Okay, we need to do something.” But, of course, you can only do within the limitations you’ve got, whether that’s the amount of people involved or how the police will react to certain things. The way we do it is that we find a few decent pubs with some nice owners where you don’t have to deal with any stupid bouncers at the door. There’s the odd free festival, though again, the best ones are also always those that the authorities come down hard on.

Kevin: I’ve noticed at shows that you are almost always manning the merchandise table.

Deek: It is a great way of meeting people. You get to talk to people about all kinds of stuff. We don’t very often sit in a fucking backstage room. If we’re not doing the merchandise, we’re just kind of out there drinking and talking to people. We definitely won’t be staying in a fucking hotel. We go back to people’s houses and spend time with people who are on the same wavelength. And if it happens that they’re not on the same wavelength, then we end up having some pretty interesting discussions that usually change the way we look at things or whatever. We’ve learned so much from people on tour that we’ve been able to bring back here and I’m sure it goes both ways.

Kevin: So any plans to come to the U.S.?

Deek: Would we even get into the country? Can you imagine getting all that money, buying the tickets, and then not getting in? The other thing with the States is this fucking business of fingerprinting you on entry. None of us have any desire to be fingerprinted. So the U.S. is not going to be on the fucking top of my fucking list of place to be going to. As much as I’d love to go back there, there are so many other great places. We’ve never been to Japan, never been to Australia. We are planning on going back to Canada maybe next year.

Kevin: So what about the new album? Do you know who you are going to release that withyet?

Deek: We’re not quite sure yet. People who we know and like and trust. But we haven’t made any decisions yet because we’ve recorded a lot of stuff and we don’t know what’s going on the album yet. Also, it always takes us fucking ages to design and decide on the artwork, the information inside, and all that because we don’t want to just put out a slab of vinyl. We want to produce a good package and that takes time to do. And if it’s all in Gaelic, we need a bit more space because it’s got to have translations.

Kevin: Let me just talk briefly about anarchy. How do youunderstand anarchy? Because as we were saying, get twenty anarchists together and youget twenty different definitions of anarchy.

Deek: If you want to try to put it in a nutshell, it’s, basically, respect. Respect for other people and all other forms of life on the planet. And if you subscribe to those ideas then that’s going to give you a rough idea and guide to things. But also don’t expect other people to do stuff. We have the fucking power to do it. It’s not a case of petitioning politicians to please change things for us. We’re just going to go and do it. We haven’t got a venue where we can play? Okay, we go and build a stage on an island! There are some sick rich bastards who get their kicks hunting foxes? Don’t waste your time on writing to Parliament to get the law changed. Instead, let’s get a bunch of our mates together in a van and stop them. That’s the kind of philosophy.
We definitely don’t see it as “chaos as a form of protest.” I’m not into that. I’m not wholly sure what they mean by that. You get the inevitable questions like, who’s going to sweep the streets and clean up the rubbish and things, and we point to things like 1930s Spain and so on. Workers co-operatives and places throughout history that have organised themselves together in a kind of egalitarian way. There are different types of organisation which are appropriate for different things. It might be about decentralization and breaking things down into smaller pieces so you can have a more localized level where people can be human and organize in ways that don’t alienate people. We are hard line... but there is room for variation. We would say that we are anarchists, we wouldn’t just say it as a slogan or that we don’t think about it or discuss it. It is a very big topic and we could discuss it all day.