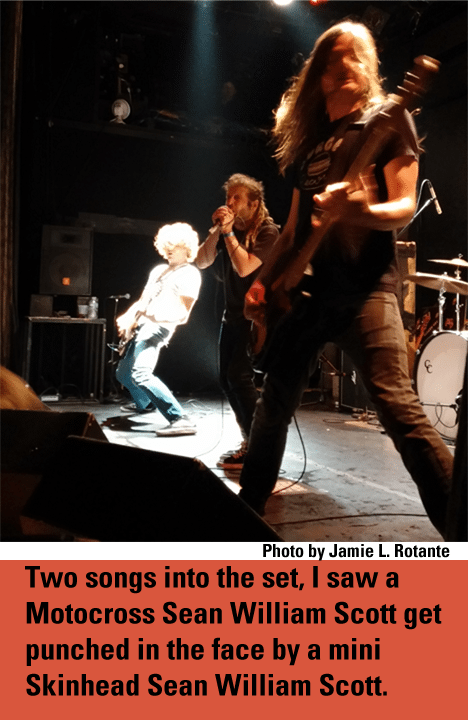 OFF! Brings Their Fun and Ferocity to NYC’s Bowery Ballroom: I’ve Got News For You By Jamie L. Rotante

On May 17, 2014 I had the pleasure of seeing OFF! at Bowery Ballroom in NYC. If you subscribe to virtually any music publication, you’re probably well aware of who OFF! is, but here’s some quick info to bring you up to speed: Lead singer Keith Morris was a founding member of such seminal punk bands as Black Flag and Circle Jerks, and OFF! is the brainchild of he, Dmitri Coats (front man of Burning Brides), Steven Shane McDonald (Redd Kross bassist) and Mario Rubalcaba (Rocket From The Crypt/Hot Snakes drummer), and their music will punch you in the face with intellect, fury, and wit. Despite being an iconic figure in punk history, Keith Morris remains one of the coolest and down to earth motherfuckers out there (the same can hardly be said for some former bandmates—well, mate—but we’ll leave him out of it. After all, this is about OFF!, and not that other insect-repellant-named band.)

Speaking of insect repellant, I’m writing this on one of the first nights of summer where I can sit outside, citronella candle burning away, children finishing up a basketball game next door, and birds singing despite it being nearly eight o’clock at night. Sometimes you have to stop for a moment and take in the little things.

Anyway, back to the show: NYC’s own Cerebral Ballzy opened for OFF! and their curtain-swinging, high-octane punk got the crowd rolling. Speaking of the crowd, it was a diverse mix of aging punk rocker guys who looked like they just stumbled out of happy hour, and young kids tearing up the floor. I made a note of the fact that nearly every white male in attendance looked like Sean William Scott. Two songs into the set, I saw a motocross Sean William Scott get punched in the face by a mini Skinhead Sean William Scott. It didn’t seem to deter him from enjoying the rest of the show.

OFF! came on-stage, tuned up, Morris put the set lists down for everyone, and then just fucking played. No pretense, no big build-up, no overly baiting anticipation, just pure, unadulterated punk rock awesomeness.

A few songs into the set, a guy standing behind me started yelling “FUCK GIN” while Morris talked in between songs. (Crowds in New York often like to yell opinions if there’s a break in music, the most popular one usually being “SHUT THE FUCK UP AND PLAY!”) It was a rather odd and out of the blue opinion to share, but I guess he’s really not a fan of the juniper-based alcoholic beverage. Maybe he had a bad experience? Perhaps he’s allergic to juniper? When others started echoing a similar, though not the quite identical sentiment, I understood where he was coming from. And it raised a really important question: who the hell opts for a soft “G”? (Morris eventually spoke his words about the hard “G” in question, before launching into “I Got News for You.”)

OFF! blazed through their solid, twenty-two song set, with Morris sharing his various opinions on life and the world between songs here and there (Prompting one audience member to yell out—you guessed it—“SHUT THE FUCK UP AND PLAY!!” to which Morris replied, “I’m sorry, do you have somewhere to fucking be?”) I enjoyed hearing Keith’s on-stage witticisms. At one point he took a moment to address the tragic accident that happened during SXSW, when a drunk driver ran drove the wrong way down a one way street and lost control of his car, crashing through the temporary barricades and into a crowd of people. Morris extolled about how “life fucking sucks and life is unfair… and there are people out there who just want to make sure you never have fun…”

A majority of their songs hit just over the one-minute mark, which meant I got the best of both worlds: to hear nearly every song from their discography I was itching to hear, and to be home and in bed by midnight, the ideal for a show-loving granny-in-training like myself.

So as I sit here, citronella candle (unfortunately not OFF! brand because, to echo Morris, life isn’t that perfect) collecting more wax as I’m winding down this piece, I think about how beautiful this particular night is. It was a similar nice night in May when I saw OFF!. Despite the Bowery Ballroom blaring AC too high (Morris remarked before their set began, “why is it like a fucking meat locker in here? It’s like that scene in Goodfellas.”), despite not having enough time or cash to pay some visits to the bar before the show started, and even despite all the too drunk Sean William Scotts, it was a lot fun. Because those insignificant things don’t matter when you’re having a good time, and, though life may be unfair at times, this world still has some really beautiful things to offer. Because in life, there’s always going to be something or someone out there who’s going to try and ruin your fun. And, God damn it, don’t ever let them.

Jamie L. Rotante is a NY-based writer who considers herself a vinyl enthusiast and a chocolate chip cookie aficionado. She wants to be your friend. Talk to her at twitter.com/Jamitha