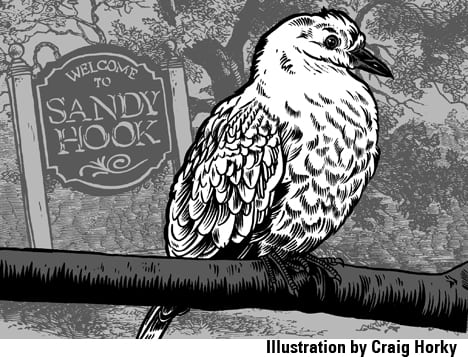 1.
Like everyone else, I was horrified when I heard about the shootings in Newtown on December 14. I texted my wife, who is a high school biology teacher. “Terrible news about the school shooting in CT. Many, many very young children killed.” She wrote back immediately. “This is scary. Please find out where. Avielle goes to a school and they live in CT.” “They” are our friends Jen and Jeremy. Avielle is their daughter. My wife worked with Jeremy at a pharmaceutical company for close to ten years. We’ve celebrated birthdays and barbecues, weddings and white elephant parties. Our kids have gone trick or treating together. After my wife was laid off, the company downsized and Jeremy took a job in Connecticut. “Newtown,” I typed. Newtown didn’t mean anything to me. It hadn’t been colonized by the tragedy like Aurora and Columbine. It didn’t mean what it does now.

2.
Traditional media was useless. Speculative and stepped on with maybes and mights. I went to Facebook. I went to Twitter. It felt like 9/11—or what Facebook and Twitter might have felt like had they been around back then. Outrage everywhere. Filters off. Rage on. I was surprised by how quickly the updates and tweets had turned political. It was too much. I turned away. I listened to the Mean Jeans. Goofy songs about a never-ending adolescence. “Capri Sun. Capri Sun. Capri Su-uh-un.”

3.
My wife called in hysterics. Our friends’ daughter was dead. She was calling from her classroom, surrounded by students, many of whom were freaking out. “I’ll be right there,” I said. “I’m coming, baby.” She was in San Diego. I was in Los Angeles. I wasn’t going to be anywhere anytime soon. I told my boss I had to go. I told her what I knew, which wasn’t much. My boss threw up her arms. “The world sucks!”

4.
I listened to NPR in my car. Compared to the rage on social media, the newscast seemed subdued. Bloodless and tame. Somewhere in Orange County, it occurred to me that the broadcaster was following a script. A script for school shootings. It made sense. This wasn’t the first school shooting and it wouldn’t be the last. They gathered up the “experts” and filled the airwaves with chatter in between press conferences. Roundabout recitations of what they did not yet know, which was everything. The only one who seemed the least bit freaked out was the reporter on the ground in Newtown. When the announcer asked him if there was a vigil planned for that night, the reporter sounded dumbfounded. “Vigil? This only happened a few hours ago. I don’t think anyone’s thinking about a vigil.”

5.
Everything we heard about the crime turned out to be false. The weapon. The room. The shooter. The shot. The only thing that stayed true was this: Avielle was gone.

6.
That weekend we went Christmas shopping. I thought it would help to think about other people for a while. After browsing overpriced candles and teacups and shit that had a purpose I couldn’t identify, I wandered into a dead end. I must have been standing under a speaker because the Christmas carols felt like an assault. It’s that most wonderful time of the year… No. When all of your dreams come true… No, no, no. I held onto my wife, she held onto me, and we stayed like that for a while. You can completely lose it in the middle of a crowded store and everyone will go out of their way not to notice.

7.
We went to Newtown for Avielle’s memorial service. We booked a flight from Los Angeles to Hartford with a layover in Baltimore. Taking no chances, we left San Diego early in the morning. Southwest sent me three text messages. Each text announced that the flight time had been changed. The first two were delays, the third restored the original time. We didn’t know it yet, but these messages were omens. Like how the night before the shooting, my wife kept tossing and turning in her sleep. We were on the plane, preparing for takeoff, when the captain told us our flight was delayed. Then delayed turned to postponed and they kicked us off the plane. By the time we got to the counter, our flight had been cancelled. There was fog in Baltimore. There were no flights to Hartford. There was no way Southwest could get us to the East Coast in time for the service. This made my wife very upset. We took the useless ticket anyway. I got online and in about fifteen seconds booked a flight through Expedia. My wife called one of our friends who was already in Newtown, and she put us in touch with someone at American Airlines. American Airlines was providing free flights to people flying into Connecticut for the services. We called them up. The American Airlines representative booked us on a flight to JFK. A car service would take us into Connecticut where we’d stay with a friend of Jen and Jeremy’s. We now had three tickets each, six total, to Newtown. Six tickets to a place we wished we didn’t have to go.

8.
Everyone wants to talk about gun control. I don’t know anything about control, but I am becoming an expert in grief.

9.
In the morning, my wife and I met, or became reacquainted, with all the people who were involved with the service. I’d been asked to read remembrances written by those who were close to Avielle. I was very glad to do this for it gave me a reason to hold it together, a job to do. Jen and Jeremy had just one stipulation: no god talk.

10.
There were a number of funerals and services being held that day. So many, in fact, that all the mortuaries were booked. It was a dark and gloomy day. Funereal. Old rain-soaked, leaf-splattered roads with names like Old Mill and Sugarloaf were made garish by sirens. Police cars and hearses and funeral processions crisscrossing in the rain. The New England scenery made me nostalgic for an innocence that can no longer be conjured, only invented. Someone looked at their phone in confusion. “My cell phone doesn’t know where I am.” None of us knew how to navigate this strange, gray world. Occasionally we’d pass a news van and we’d all think the same thing: Keep going, motherfucker. Don’t even think about turning around…

11.
The service was held in a gorgeous hall on the edge of a lake. It was a service full of stories and photographs and artwork. There was a lot of light and laughter. I held it together. I didn’t fuck up, even when I looked up and saw my wife sitting with Avielle’s nanny, a young girl barely out of high school, ripped apart with grief. Every once in a while, a white bird flew across the lake. The kind of thing you see and can’t help but wonder. Is it…? Could it…? When the service was over, I went to those windows and looked at my reflection, hoping I didn’t look as lost as I felt. I didn’t have a job to do anymore, and I didn’t know what to do. I just wanted to go home and hug my daughter, which is a feeling one is permitted to indulge at all times and in all places except at the memorial service for your friends’ young daughter.

12.
The sign hanging from an overpass read Pray for Newtown. But what if we don’t want to?

13.
Last summer, my wife spent a week with Avielle at their house in Sandy Hook. She slept in the upstairs guest bedroom adjacent to Avielle’s room. Every morning Avielle came in and woke my wife up to commence the day’s activities, and every day my wife talked Avielle into snuggling with her for a few minutes. Those days now feel like a gift. The night of the service, we slept in that guest room. Before we went to bed, we spent a few minutes in Avielle’s room. A bright, cheery place with a lot of good energy. On the wall across from the doorway hangs a painting of two women walking on the beach. My wife painted it and donated it in a raffle to raise money for breast cancer awareness. Jeremy, who’d recently lost his mother to cancer, won the painting. One of those things that was just meant to be. It was so comforting to see the painting hanging in Avielle’s room, to know that she’d grown up with it, that in some meaningful way it had inhabited her imagination. We know this because she made a copy of it in her diary. That’s the kind of kid she was. If you spend any time studying the painting that hangs in Avielle’s room, you’ll see two women, but only one set of footprints. One woman has her eyes closed in reverie; the other is a memory, but only a fool would say she’s not there.

14.
In the morning, we discovered that we weren’t alone. Max, Jen and Jeremy’s aging pit bull, had joined us during the night. Old Max looked sad because he was sad. He knew everything I am struggling to say.

15.
On my first day back at work, I woke up extra early. It was still dark when I got in my car and turned on Sirius satellite radio. I’d kicked the news habit and listened to the NFL channel nonstop. Sometimes they come out of their breaks with music. Sometimes it’s hip-hop. Sometimes metal. It’s not uncommon to hear the opening to Metallica’s “For Whom the Bell Tolls.” Sure enough, I heard the tolling bells that told me Cliff Burton’s epic bass licks were on their way. I turned the volume up. Way up. But the licks didn’t come. The bells kept on tolling. This must be long a version, I thought, but by now I could hear other things. Cars. Voices. People sniffling. This isn’t Metallica, I realized like a total dumbass. This is Newtown. I pulled over to the side of the road, covered my face with my hands, and wept.