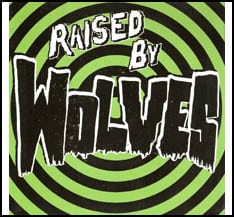 Not Going to the Show: MP Johnson's Fourteenth Column

Sure, going to shows is a blast, but have you ever wondered what would happen if you didn’t go to a show? Now, I don’t mean staying at home and watching Japanese movies about giant monsters, although that’s fun too. I mean standing in front of the club and seeing what goes down on the outside while the rock is going down on the inside. That’s what Nate and I did when Wolf Brigade played at the Triple Rock.

You may be familiar with a pair of film characters who have a habit of hanging out in front of a certain gas station, constantly pestering a couple of dorky clerks. They’re a couple of likeable drug-dealing miscreants. Imagine the complete opposite of those guys and you’ll come pretty close to me and Nate. We’re both straight edge. He’s a skinhead and a wrestler. I’m a writer and I wear my jeans too large.

At first, I regretted the decision and wished I had brought the money to get into the show. I expected immediate excitement, but all I got was a pack of middle-aged biker dudes riding around the block and passing us multiple times. Since we had been hanging out all day, Nate and I were quickly reaching a point where we didn’t have a whole lot more to talk about.

As our boredom grew, I started making funny noises. While I shouted, “doodoodooo,” Nate used the sidewalk to do some stretches. Mostly, he did calf and thigh stretches, the kind where you lean down kind of like a runner about to take off into a sprint. All around us, a sea of crusty punks ebbed and flowed in and out of the club.

Looking up, I saw a big bat fluttering around just a few feet above us. I hoped it was giving a signal to the nocturnal world for shit to get interesting. Hell, I didn’t skip a crazy Swedish hardcore band to stand around and clap my hands like a weirdo all night.

As I leaned up against the wall, waiting for the world to entertain me, the bikers drove past again. A gutter punk made some comment about them being a bunch of douche bags or something along those lines. My acknowledging laughter was as good enough a segue into a conversation as any. In the space of about five minutes, we riffed on rich biker dudes, the shitty healthcare system, and living under the grid. This guy’s gestures were as frantic as the pace of our conversation. He seemed intent on beating each sentence in with a jab from his rigid fist. Transitions to other topics were punctuated by a loud clicking noise he made with his tongue. Our conversation faded and he disappeared into the crowd of other sidewalk dwellers.

In his place emerged a blonde transsexual who seemed dedicated to taking a photo of every dreadlock lingering outside. I wouldn’t have known she was a transsexual, had she not been involved in multiple high-volume conversations that involved her stating things like, “What, do you see a lot of other trannies hanging out here?” and “I’m pretty sure I’m the only tranny who hangs out here.” As the flash of her camera grew less and less frequent, she got caught in the tide of people going in and out of the club.

From down the street, a bald dude wandered into the sidewalk crowd. I watched him silently hand a sheet of paper to various punks. They shook their heads and returned it to him. Of course, I was curious about what was on that paper, but not for long. Soon, it was my turn to see it. I held out my hand and took it from his wrinkled black fingers. It was a signature sheet. The header read “The Society of Minneapolis Deaf People.” Below it was a list of signatures. Next to each was the amount of money they donated to the cause. I saw a lot of $5 donations.

I had no doubt that only the most legitimate of charity organizations would solicit money in this way in the middle of a Saturday night in front of the Triple Rock Social Club. Unfortunately, I’m a jerk who doesn’t give money to people. I shook my head negative. He turned his back to me so he could hand his sheet to other people.

Staring at the back of his bald dome, I turned to Nate and quietly asked, “Do you think he’s really deaf?”

At that point, Nick wandered out of the club, gleefully toting a record by one of the bands that had played. Simultaneously, the deaf dude turned around, glaring at me with his face all full of pissed off.

The dude reached into his pocket and handed Nick a sheet of paper. I tried to grab it first, but my skills at games like keep away have never really exceeded the level of sucking really bad. He quickly pulled away, apparently not wanting me to see the message he had pre-scribbled in case of situations like these. Luckily, Nick was kind enough to read it for me. It said something about me being a knucklehead. After the bald guy stuffed the note back in his pocket, he stuck out the middle finger of each of his hands and raised them up to his forehead, turning them into devil horns.

Satisfied that he had told me off, so to speak, he went back into the crowd to get more money.

Then an old fella pulled up on a bicycle with a fiddle in his hands. His chin was graced with the longest, most hillbilly beard I had seen within city limits. He placed his bike against a sign post and unsheathed his instrument. Leaving his case open for people to put change in it, he went to town. The energy that man put into playing that fiddle seemed to surge through his body. He stomped his feet and jumped around, weaving in and around the crowd of hardcore kids and crusty punks. Eventually, his chaotic movements found him flinging his body into the middle of the street, bouncing and slamming the soles of his boots against the blacktop as punks cheered him on. Traffic moved around him. If they honked, I couldn’t hear it. I was way too into the poorly tuned jam pulsating from those worn out strings.

As the show ended and the crowd exited the Triple Rock, the fiddle player seemed to disappear into thin air, as if he was a treat only for those who didn’t go to the show.

Never before have I been so keenly aware of how bad drumming can possibly be. The same monotonous, dull thud runs through all three songs on this record. Maybe that’s this band’s thing. Hell, maybe it’s not even a band. Maybe it’s just one clown named Skip, trying in vain to play all the instruments at once. I know it’s hard, but still. That damn drumming! Thud thud thud… oh wait, that’s the sound of me banging my cranium against the wall, trying to rattle the sound of this record out of my brain. –MP Johnson (La-Ti-Da)

Recorded in Howl-O-Phonic, this slab starts out with a set of howls that continue through the first song. They’re a little wimpy as far as howls go. A little too high pitched. They would be more likely to bust loose from the throat of a wolf that had just been kicked in the nuts than a rabid beast hunting down its prey. Still, I can forgive certain things when a band’s manic energy jumps off of a record and gets into my veins, making me want to prowl the woods, leaping from tree to tree while hunting some mutant grunge werewolf. –MP Johnson (Zaxxon) 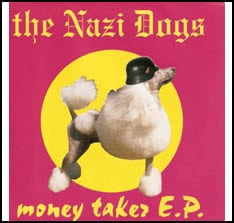 It looks like this four-song record was released jointly by four different record labels. Does that mean that four labels liked it a bit, but not quite enough to invest in completely? Does that mean that four punk kids got together and pooled their allowances to release it? Does that mean that the result is a couple of decently executed covers and two extremely boring originals that I really don’t want to listen to? I’m answering yes to at least one of those questions. Can you guess which one? –MP Johnson (Caustic Rock, Drunk ‘n’ Roll, et al.)

Disclaimer: Skipping good shows on a regular basis may lead to a serious risk of you becoming a jackass.

Until next month, feel free to visit http://www.freaktension.com/ to learn about the exciting world of giant zombies smashing up Wisconsin.