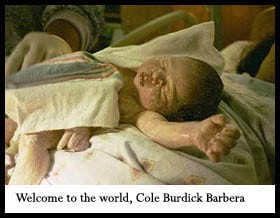 No, I Don't Want to Go to the Bar, Dammit!: by Greg Barbera

On Memorial Day Weekend, I found myself at the crossroads of decisions: Do I go see Black Taj - an offshoot of long-defunct indie rock heroes Polvo - at the Cat's Cradle in Carrboro? Or go home to my nine-months-pregnant and about to pop wife?

I opted to go to the Cradle after I got off my shift, working a wedding reception for a local catering company, and check out some music. I figured I'd be tethered to the homestead for at least a month after the baby came, so I hedged my bets that tonight wouldn't be the night my wife would give birth and headed to the show.

Fueled by a Poison Idea/Battalion of Saints tape I found wedged between the driver seat and passenger seat of my charcoal gray '93 Ford Ranger (shortbed!) truck. The same truck I bought at Sunrise Ford in Tujunga, Calif., a decade ago. Not that the tape had been there that long. Nope. But it had been there since Darkest Hour guitarist Mike Schleibaum name-dropped Oi Polloi in a recent interview. "We played with them in Europe," he said. "They've had over a hundred members in the band." This confirmed my suspicions as to if it was the same Oi Polloi. "They did a song about THC," he said.

I spent hours searching through an old box of cassette tapes looking for my old Oi Polloi tape. Never did find it. But I found the Battallions tape - with live tracks no less - as well as couple of old classic comps like the Pushead-designed Cleansing the Bacteria and Welcome to 1984 with some of the best foreign hardcore my ears have ever heard.

I think I bought the truck from the guy because I knew him as the guy who always had the coke or because my wife played with his wife in the Montrose pool league or he was the husband of the wife who played pool with my wife with a passion for cross-dressing and snorting coke. Yeah. That's what it was.

The Midnight Evils vaguely remind me of Poison Idea and the Evils are Estrus Records labelmates with Cherry Valence. And seeing Cherry Valence is one thing but seeing them with the likes of a Fireballs of Freedom, Gasoline, Federation X - seeing them with their labelmates - is quite another because each band is lookin' to up the score. Nobody wants to play last. Not that the Midnight Evils were playing with Cherry Valence on that fateful night. No. It would be an entirely different band from the indie rock cognoscenti.

Jesus though, as you'll soon see, I'd never make it to see Cherry Valence.

Steve Popson, former bassist for Polvo and one of the owners of a rock club called Kings Barcade in Raleigh, N.C., and guitarist Dave Brylawski (also formerly of Polvo, Polvo being part of the Holy Trinity of Superchunk and Archers Of Loaf that made Chapel Hill a Mecca for indie rock back in the mid-'90s), we're debuting their new outfit Black Taj - the opening act on a bill that included juke jointers the Dynamite Brothers and Raleigh, N.C., road dogs The Cherry Valence. Black Taj had made their hometown Raleigh debut a few months prior and now it was time to make the twenty-five mile trek east across Interstate 40 to wow the jaded hipsters of Chapel Hill.

I got to the club, got there early I might add (early in the sense that you never know when bands are going to start playing, regardless of venue), and pondered the facts of life as I drank a perspiring High Life: A stay-at-home-dad by day and a freelance music writer by trade, I was just ten days away from the birth of my second child and feeling the mounting pressure that goes with such a situation.

As a punk rock dad, I spend the majority of my days hanging out at the park with my three-year-old son Spencer, watching him peddle around on his mini BMX bike with training wheels. Rainy days are spent singing along to Turbonegro or Thin Lizzy while I try to teach him how to throw the goat. Two days a week I'm relieved from my duties for a couple of hours while he attends a cooperative playschool.

I usually read and listen to music during those early morning hours, when coffee adds the kick to a day jump-started around five a.m.

But with an infant, all this would change.

At the Cat's Cradle, I ran into several friends who are excited for me to be out on a Saturday night, and excited for me to be out at a decent show knowing it could be months before I'm able to keep my eyes open past midnight. Black Taj played a rocky set (and by rocky I don't mean "rawk" but somewhat sloppy; like they needed to practice a bit more) of Hendrix-meets-Sonic Youth jams, long on wanking and short on lyrics. Brylawski's between-song banter had slipped since the days of Polvo, where he never seemed to be short of saying something. Most of it revolved around band dynamics. I grew quickly tired and headed for the door. Once outside, I met two friends who tried to lure me into the debauchery of the Orange County Social Club - a local watering hole owned and operated by a former Merge employee and with prerequisite band member bartenders. As much as I wanted to go, something inside of me made me say no. It could have been the lack of funds in my pocket, but that's a poor excuse because I knew I could rally the troops for a few beers on the premise of celebrating the pending childbirth. Maybe it was the fact that my wife had left a message on my cell phone earlier in the evening saying, "Don't worry, I'm not in labor... but you need to pick up some milk for Spencer." Maybe it was a full moon, I'm not sure. But for whatever reason, I made the decision to go home.

And it's a good goddamn thing I did. Roughly an hour and a half later - at one-thirty a.m. - just about the time I'd be considering leaving the bar before last call, my wife's water broke. When the water breaks, it can mean only one thing: a child will be born soon..

Being responsible isn't my best suit. I've done a lot of stupid things in my day, and fortunately, having kids has allowed me to learn the ropes of acting responsibly. But it's not an easy path to be traveled, especially when you look at what has happened in the past ten months since my wife and I first learned of her pregnancy. I lost my job as a music editor when the local weekly folded; I left my pregnant wife alone with our son for three days to take a trip to Los Angeles to see the debut of Jackass: The Movie which was produced and directed by one of my childhood friends, Jeff Tremaine; we converted our carport into a guest room in anticipation of the new addition to the family (note to self: prenatal hormones and home improvement don't go together); we were crippled by an ice storm that left us without power for several days; I came down with a raging case of sinusitis that led to a case of strep throat in the winter and bronchitis in the spring; I had the unfortunate occurrence of having an Amstel Light bottle explode in my face while bartending at a wedding reception, a shard of glass scratching my cornea.

On top of all this, I've been on a serious Oblivians jag (Best of the Worst 93-97) and its various offshoots (Cool Jerks, Tearjerkers, Deadly Snakes, Reigning Sound), which primed me to have a full-blown, alcohol and drug-induced fall out.

But it didn't happen. Well, I did revel in the lucid dreams brought on by the codeine cough syrup prescribed for the chest congestion and the somnambulistic existence of life under two successive percocet prescriptions. But I managed to avoid any drunken encounters with the law, or my wife, and stayed relatively sober during one of the most tenuous moments of my life, the long days before the birth of your child, when your wife, wracked with discomfort, wants it done with; wants the fetus out of her.

On May 25, a Sunday afternoon, at approximately 2:37 p.m., my second son - Cole Burdick Barbera - was welcomed into the world. Almost two weeks later, his jaundice is gone (and so are the in-laws) and I'm exicted as hell to listen to the stack of music that has accumalated by the stereo.

There's Betty Blowtorch, a posthumous disc of raunch and roll featuring former members of Hollywood noise-punk band Butt Trumpet - which brings back visions of my life in Los Angeles; of the time when I first moved to Glendale, to live with a friend who worked on The Simpsons, and went to see Clawhammer at Raji's only to find out that the prime parking spot I thought I scored out front of the club wasn't so prime - my car had been towed because of the almighty temporary "No Parking" sign erected for a film shoot. There were things I needed to learn if I was to stay in this concrete island. Things like when and where to park and how to not go to the police dept. impound lot at three a.m. drunk.

I've got Darkest Hour in there too, a metal band from my old stomping grounds of metropolitian D.C., who have taken their penchant for Swedish metal and crass politics to a new level. Don't call their new record a concept record, but Hidden Hands of Sadist Nation harkens back to metal's glory days of records like Megedeth's Peace Sells... But Who's Buying and Metallica's Master of Puppets, back when metal had a message.

And then there's endless amounts of reggae my British friend and former co-worker at the now defunct weekly paper keeps turning me on to: Trinity, Ja-Man All Stars and Jackie Mittoo (can you say Blood & Fire?). Nothing can give you better peace of mind than some good rhythms wrapped around positive vibes.

One thing you learn when having kids: There's never a dull moment.
And that's how things shake down in my world, at my house.
A house with a wife, two kids, a cat and myself.
A nice supply of tunes to help guide you down the path of the warrior; of the life of a punk rock dad.
This is The House of G.
You can join my ride any time here at www.razorcake.com