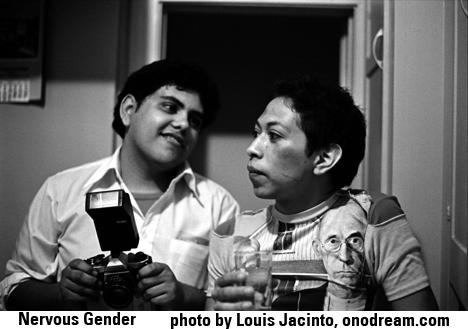 I met Mike and Gerardo when I moved to Los Angeles in 1975 to start my third year of college.  At the time, Gerardo was doing his long hair, John Lennon bed-in for peace thing, and the both of us had all of Yoko Ono’s records!  But when punk rock hit the three of us felt that the world had finally caught up to Yoko Ono.

This is a photograph at a friend’s apartment, having a few drinks, etc., in preparation for our night out to go listen to some punk bands.  Screamers, Bags, and Alley Cats were our favorites!

We were just a bunch of kids, appreciating these new sounds and ideals!  A year after this photograph was taken, Mike and Edward would meet Edward Stapleton and the three would form Nervous Gender, turning the local punk scene upside down!