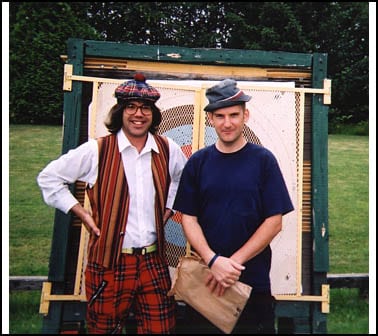 Nardwuar The Human Serviette Vs. Ian MacKaye: This interview originally ran in Razorcake #04, 2001 By Nardwuar

In early July of the year two-thousand and one, Fugazi ended their Western Canadian tour playing the Bill Copeland Sports Centre in Burnaby, BC, Canada, a suburb of Vancouver famous for being the birthplace of Michael J. Fox. Despite the fact that the venue had a.) never been used for a rock concert before and b.) there was a bus strike happening (not a great thing if you are trying to put on an all ages gig!), 2,500 kids showed up! It was one wicked “happening” that many will never forget. Thanks to Miss Terry, the amazing promoter who brought Fugazi to Burnaby, for setting this interview up. What interview? This interview...

Ian’s like the Dalai Lama of punk. He’s equally hated (or is it feared?) and revered. Eloquent, insightful, and wholly humanitarian, MacKaye is noted for his critical role in Minor Threat and Fugazi, but he may be just as well known for his militant belief in anti-corporatism and DIY culture.

In 2001 while Fugazi did limited touring for The Argument, Ian and Amy Farina formed The Evens, a folky, indie rock two-piece with Ian on baritone guitar; Amy playing drums, and both laying down vocals. Later that year, Fugazi went on hiatus due to its members tending to family obligations. Without Fugazi to focus on, Ian, co-founder of Dischord Records, set to re-mastering and producing albums for acts like Q Not U, John Frusciante, and Gray Matter.

In 2003, The Evens released Vowel Movement, a Sesame Street style sing-a-long for an internet based children’s program, leaving Ian’s fans scratching their heads at his new musical direction. 2004 had its ups and downs. The Evens recorded their debut album. However, this new venture was eclipsed by the death of Ian’s mom, Ginger, from emphysema. An integral part of Dischord, Ginger received the label’s mail from the very beginning and later greeted kids who stopped by the Beecher Street address looking for its headquarters. In 2005, Dischord celebrated their 25th anniversary and in ‘06 The Evens released their second album, Get Evens,opting for booking gigs at local libraries and community centers instead of clubs and bars.

Always trying to shine a light on injustice, in 2007, Ian re-mastered audio from one of the survivors of the Kent State Massacre back in 1970. MacKaye’s work exposes a National Guard clearly giving orders to shoot the unarmed college kids protesting the U.S. invasion of Cambodia and the lingering effects of the Vietnam War. It is unclear if this new evidence will cause the case to be reopened.

Ian and Amy Farina saw the birth of their son, Carmine, in 2008 and in November 2011, Ian lent his name in support of Occupy Musicians, an off-shoot of the Occupy movement comprised of musicians willing to lend their talent during demonstrations. Ian launched the Fugazi Live Series (http://www.dischord.com/fugazi_live_series) on Dischord’s website in December 2011, with a goal of archiving over eight hundred Fugazi gigs. Fans are encouraged to submit content such as photos, recordings, and the like. So far, the site has uploaded fifty recordings, including their first live show on September 3, 1987 in Washington DC. A sliding scale fee is offered per download.

Now over ten years later, Ian is staunch on an open-door policy, neither refuting or confirming claims that Fugazi has disbanded.