Narcoleptic Youth is getting kind of geriatric old, but that’s okay because Corona, California’s finest still rocks with the vitality and intensity of adolescence. As the clock winds down on the current location for the long-standing Showcase Theatre, a whole bunch of great shows were piled on as we neared the end of the venue’s current location. Little did I know it at the time, this was to be my last show at the beloved Showcase Theatre. I have countless memories of this place and it will always have a cherished place in my heart and mind. This delightfully dingy venue is where I saw the best, endured the worst, and it is where I met my fiancé. All hail to the CBGBs of the Inland Empire and we all look forward to the opening of the new location…wherever and whenever that may be.

Slow Children is a pretty good local unit from Corona that plays commendable, basic punk rock that reminds me of the early days. Unfortunately, the band had finished its set before I arrived. Since everyone in the universe has a MySpace page, I looked ‘em up there. I liked what I heard and wished I had heard it live. This is the sort of stuff we used to listen to in the early ‘80s while skating our ramps and various backyard pools. It’s not a skate band, but its got spirit and a definite message. Listen: www.myspace.com/slowchildrens 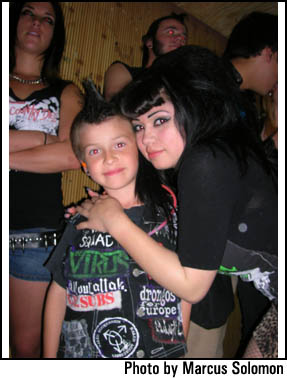 Cliché or not, it’s always good to see a big ‘ol mohawk onstage when you enter the club. Decrats was onstage when we got there, and we saw a kid with a big ‘ol mohawk and his two cohorts—one with a twin-fin hairdo of his own design—creating glorious punk noise and ripping up a storm. The vocals were kind of on the shouted/annoying side, but that works for this kind of super-fast punkness. Good, solid drumming set the pace for some fundamental, head-nodding guitar and bass thrashness. It was nothing too fancy or complicated, but good nonetheless. Thumbs up for yet another young, Corona-based punk group. Vocalist/guitarist Mike said: “This was one of the more fun shows we have played at Showcase. It’s just sad to us that the Showcase is relocating, because so many good things have come out of there and so many kids have grown up there as well. I’m glad everyone had fun.”
www.myspace.com/thedecrats

Another quick band tear down and set up presented us with the odd spectacle of five masked men in matching bright red pants, matching neckties and pull-over hoods, and spotless white dress shirts. This bewildering combination of Jason Voorhees and lucha libre was The Maxies, and the group came all the way from Greenland to entertain us with their highly entertaining brand of pop-influenced punk rock. It reminded me a lot of the Ramones in terms of arrangement, but with a considerable dose of tweaked-out, American ‘70s rock, happy keyboard infusion, and a lot of silly, immature jokes. Some drunk idiot in the crowd took their gay jokes much too seriously and challenged the band with the drunken middle finger of contempt and tried to start a fight. Said moron was justly defeated by the indomitable mirth of The Maxies and a quick microphone bonk to the head. Check ‘em out before global warming submerges this great band’s nation: www.myspace.com/themaxies

The mood quickly changed from light-hearted mirth to serious intensity when All Or Nothing H.C. took the stage. This band has progressed much within the past few years. While I used to roll my eyes and cringe at the band member’s excessive posturing and sloppy live show, that approach has fallen to the wayside and the focus now is clearly the music and its message. Hardcore is what it is, and if you know hardcore, then you pretty much know what this sounds like. What really impressed me was how much tighter this Norco-based foursome had become, along with some nicely played and well-placed short metal solos. Vocalist Renae is an intense performer and her strongly leaning leftist message is right-on with many positive messages regarding human rights, social freedom, political awareness, and the power of education. I particularly enjoyed the song “Essential Freedoms.” She also happens to be a 5th grade teacher, so try to imagine this woman teaching little kids fractions and grammar…I think it’s a wonderful image. www.myspace.com/allornothinghc 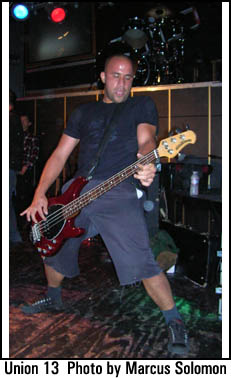 Speaking of image, I brought two emo-clones to this show with the conscious intention of exposing their fad-polluted, impressionable minds to some genuinely emotional and truly thunderous music that would blast the fuck out of their conformist, fashion-victim mentality; Union 13 left no doubt that it was mission accomplished. What better way to annihilate the affliction of a shallow cringe-fad than to have face-melting vato-inspired punk/metal solos directly in one’s face? Now, THIS IS HARDCORE and it is great! Fast, furious, tight, and even though I do not know the words, it’s definitely pissed and seems profound. You better be tough to come from East L.A. and these five homeboys definitely crank out tunes that are big and strong while the whole crowd sings along. By this time, the whole place was going nuts and a consistent stream of stage-diving kids were throwing themselves into the churning melee of swirling bodies and raised fists. I thought the band did a cover of MDC’s “Corporate Deathburger,” but it was actually an original named, “Ronald’s Fuckhouse.” www.myspace.com/uniontrese 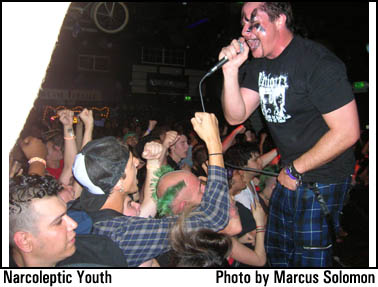 My last moments at Showcase were spent standing onstage—off to the side—with my girl and one of her favorite bands…the infamous Narcoleptic Youth…how appropriate. I have learned to love this band’s creatively versatile and humorously sneering-sardonic approach. It wasn’t a sold-out show, but the place was definitely packed with kids of all ages enthusiastically singing, laughing, and throwing their bodies all over the place. Yes, Narcoleptic Youth is still around after all these years and it has a rather impressive local following. Hopefully, the kids are listening because the band has a lot of astute social criticisms to make within the bedlam of glorious noise. The set was seventeen songs long and included a many standards like, “Is This Punk?”, “Banks Go Bust,” “Dear John,” “Class of 1999,” “Barbie in Bondage,” and a new tune called “Prime Apes,” which was quite good with its heavy bass lines and feedback-laden guitar. During “Busted Condom,” vocalist Joey Bondage had a giant, gag condom on his crotch and he sprayed those lining the stage with shaving cream. It was totally base and childish. It was totally funny. The encore included a ripping cover of Subhumans’ “Religious Wars.” Awesome, and somebody already posted it on YouTube.com.
Narc said they would never play the Showcase again due to a financial disagreement, but, fortunately, they buried the hatchet with Showcase owner Izzat in order to play one more time. Thanks to everyone that worked at Showcase. Thanks to all the bands—the great and the horrible—and thanks to all the fans that made that place seem like home. What’s next?
Be sure to visit: http://www.showcasetheatre.com/ and http://www.narcolepticyouth.com/

VARIOUS ARTISTS: If It Ain’t Cheap, It Ain’t Punk: CD