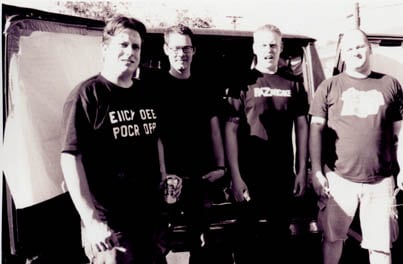 Naming Skate Tricks After Olympic Divers: An Interview with the Arrivals By Todd Taylor

Sometimes, you'll hear people talk about a "sophomore slump," like how a certain band puts out a great debut album and promptly falls flat on their collective face, how they spent their whole lives building up steam for that first album but forgetting to leave anything in the reserve tanks. The opposite is true with the Arrivals. Their debut, Goodbye New World, was phenomenal, and with their second album Exsenator Orange, they not only raised the bar on themselves, but on the entire punk scene. They take cues from great bands like Pegboy and Dillinger Four, and not just because of the way they sound. It's the way that they hone everything down so it's all tense muscle and twitching sinew. It's their ability to make you feel the sweat dripping from their foreheads while they play. It's the way they barrel through their songs like a getaway car from an old gangster movie driven by some CART driver with a hard-to-spell name: fast, powerful, and dangerous, but firmly confident and never out of control.