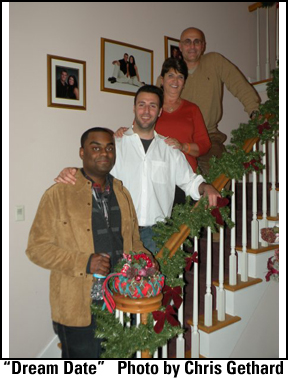 A few things about myself: First, I’ve mostly concerned myself with two things over the year. Music (which is probably a given, if you’re reading Razorcake), and comedy. While my relationship with music is fairly standard (bored teen buys records, sees bands, and so on), my introduction to comedy was a bit more subliminal (Grew up watching SNL and Letterman reruns, eventually check out some local shows, eventually realize, “Oh shit, I’ve been into this for a while now”). Another thing is that I’m a day dreamer who happens to stumble into some really interesting things. I owe a lot more to being in the right place at the right time and dumb luck than well calculated plans.

So a little while back, my friend Chris Gethard started putting together a monthly talk show (he’s a really talented comedian, who happens to be a contributor to Weird NJ and Go Metric!) and wants the Kung Fu Monkeys to act as his backing band. He’s also down with a lot of pop punk. I think to myself, “Man, that sounds awesome. I’ve always wanted to do something like that.” Sure enough, there’s a lineup change less than a month before the first show, and I manage to become the replacement. Another dream comes true on account of pure dumb luck.

The heart of the show revolves around Chris’s ability to laugh at his own bizarre life, as opposed to just being a joke or bit driven. Think Andy Kaufman, if he was making jokes at his own expense instead of purely fucking with his audience. So, of course, it’s no surprise when a few weeks before the show, Chris asks if I know anything about where to find a tazer. “I want to do an electric-musical chairs type bit, where I inevitably end up getting shocked.” After we play a brief five-song set, the show starts off by going right into co-host Shannon O’Neil’s bit. As a person who gets to watch from the side and kind of a jerk, the thing I love about her segments is that, ultimately, she’s really just trying to make the audience uncomfortable for her own amusement. (Last show, she faked a violent act on an audience volunteer). Going through the reservation list beforehand, she internet searched random names, and presented a slide show on what she found, like a mischievous Nardwuar the Human Serviette. Truthfully, she didn’t show anything overly embarrassing or hurtful (noting on one picture of a girl with Andy Samberg with, “Well, we know she’s fucked Andy Samberg”), but she did pick out one of my friends, who is an indie-pro wrestler, which was hilarious surprise.

Between full bits, Chris takes a quick break to preview the musical electric chairs bit by demonstrating the “tazapper” (which works as a makeshift/legal tazer, as it’s technically a sex toy), which, sure enough, seems to produce a decent charge. Since the bulk of the normal cast isn’t able to make this month’s show, the next bit involves some guest comedians presenting a video of their reviews of Avatar – which they saw after eating pot cookies, and one of whom was also hung over. The video is basically what you would expect, though people were coming up on stage to enter a raffle to “Win a sleep over at Chris’s parent’s house,” which I find pretty amusing. The previous show featured a raffle to win a date with Chris’s friend Don, “The handsomest man in Hackensack, New Jersey.” The date was won by Shaun Diston, who was driven to Don’s house to have dinner with Don and his parents, Don Senior, and Donna. Another video was shown with highlights from the evening, which can actually be viewed online, here: http://www.youtube.com/watch?v=zhnTeimG3AM

The special guest is one of Chris’s old girlfriends from college, who he claims “we went on the worst date of my life,” back when they were both students at RutgersUniversity in New Jersey. Of course, he quickly reveals that the “worst date ever” part was much more on part of his extreme depression and self consciousness, and summing it all up with a quick one act play about his memory of the date, which he claims, “Will either be really funny or horribly depressing.” As soon as he gets to their dinner at a Friendly’s where he orders a cone head sundae for dinner (despite it not having been on the menu for years, and that it’s for children), it’s clear that it’s the former.

Finally, it was time for the main attraction, musical electric chairs. The setup was that everyone involved (the cast, plus a few other volunteers, including some of Chris’s friends, as well two people who asked if there was anything they could do to get into the sold-out show) would be blindfolded, and a projector would go through a slide show of everyone’s picture, as we, the Kung Fu Monkeys, play music. When we stop, whoever’s picture is up is shocked and out of the game. Making the whole thing more awkward, some of the participants don’t realize what they’re getting into until just before starting. The two fill-in comics are MCing and administering the tazing. The first victim is one of the volunteers, who is apparently on his bachelor party. Making it worse, the dude in charge of tazing gets him on the back of the neck, letting out a giant spark, and causing the dude to spasm and fall to the floor, adding to the general feeling of, “Well, it’ll be interesting to see how this ends up…” It only gets worse, as Chris loses the next round, and Noah ends up shocking him between the eyes, at which point I think, “Oh, so this is the day I witness someone get blinded from ten feet away. All right then.” Needless to say, even the self-deprecating Chris isn’t happy about that.

Since Chris is out of the contest anyway, he takes over as shock master, going through everyone else one by one, until there are only two people left: the stage manager and Shaun (who won the dream date). We play an extended chorus version of “Gimme Shock Treatment” by The Ramones for suspense, with a full reggae breakdown, until it finally ends up that the stage manager loses the round, getting the last shock for the evening. That is, until Shaun, in a show of good faith, also volunteers to be shocked, and pulls down his pants, at which point I think, “So this is the moment I watch a grown dude get an electric shock on his bare ass.”

The show is finished out by drawing the winners for who will win the sleepover at Chris’s parents’ house. Sadly, I do not win. Even though I’m always a little scared of what to expect—seeing as Chris always tries to top himself, and was almost blinded tonight—I can’t help but already be anxious for the next show.