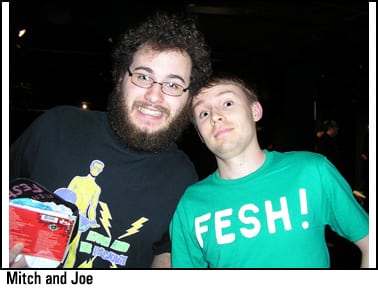 My Life in a House Band: Episode 3: Mitch Madness

Growing up in a small, “quiet” town, I often felt like an outsider. I’d feel like I was on a different page, even from my friends, and spent a lot of time by myself. Fortunately for me, I was a relatively short distance from Hoboken and New York City, so I could eventually take trips to see bands and comedy shows, reminding me that no matter how hard life brings you down at times, you can still get the chance to experience some really exciting things.

Fast forward to now—The Chris Gethard Show has been doing great, with a full house every month. So Chris, always the one to come up with a crazy idea, puts out an offer: Since he spent a lot of time growing up depressed, and unsure of where he fit in the world, that’s who he wanted as a guest —so he could show them that the world is still okay. (You can see it here: http://www.youtube.com/watch?v=nNrPMvNk7PY) He went with the first response—a young man named Mitch, from Ohio, who had similar interests in comedy, X-Men, and pro wrestling. Chris went ahead and bought him a plane ticket, and soon after Mitch Madness had begun.

While Mitch had his travel arrangements taken care of, I did not, which is fine—except when there’s a rain storm that cancels all the trains you need to transfer into Manhattan. Fortunately, after years of dealing with NJ Transit, I figured out another way to go (and thanks to an off-schedule train), and managed to get to our last-minute practice only a few minutes late. We actually cut it short so that we could head over to Brooklyn to play another show at ten at the last minute (meanwhile, the Gethard Show is at midnight, in lower Manhattan). It’s raining pretty badly at this point, and it takes us almost an hour to get there, arriving minutes before we’re supposed to play. I’m sweating, as my “there’s no way this will work; we’re going to miss our actual show” panic has started to kick in —and if there’s a show I don’t want things to fuck up, it’s this one. As soon as the banjo player band before us finishes, we rush to set up and do a sound check, which we try to rush through. The sound guy tries to assure us we’ve got plenty of time, which we collectively answer with, “Oh no, we don’t!” We play our set from the Gethard Show, verbatim—three full songs, one Zombies cover, and a handful of short bursts of intro music (for later on), including a jingle for an old Action Park commercial. Total set time: sixteen minutes.

We start to rush back to Manhattan to the theatre, but by this point the rain has died down, and we arrive with plenty of time. Anticipation is high. Anxiety of crazy, potentially harmful stunts has been replaced with the collective hope that we could all show one nice guy a good time. Finally, we get set up and are ready to start the show. Given the mild absurdity of our evening so far, we decide to do an impromptu country version of the set (after all, we figure we’re at an improv theater).

Finally we introduce Chris, the rest of the cast, as well as the guest of honor—I like to think I’m always a fan of an underdog, but there’s something amazing about seeing a room full of about two hundred people all cheering for a young man from Ohio as he walks out to “Eye of the Tiger,” for no other reason than he’s a nice guy. It wasn’t just people in the room either—Chris immediately mentioned that he’d called in every favor he could for the show and played a few videos of various comedians who couldn’t make the show—from the obscure, to some bigger names like Jack McBreyer (better known as 30 Rock’s Kenneth the Page)—but still wanted to say hey.

This particular show turned out to be very video-bit heavy—one documenting a night out with “Notorious Wild Man Will Hines” (which you can watch at http://www.youtube.com/watch?v=3gq4lo0BdcQ). Following that, some more video-greetings were played, including one from John Gemberling, who offered a rare T-shirt from his cult television show Fat Guy Stuck in Internet—which he then presented in person, with an awkward but funny strip tease (proving that being a shirtless fat guy with a beard isn’t just for Fest anymore).

Next up was a fashion show of Mitch-inspired, custom-made shirts, with a large number of entries, many of which clearly had a lot of time and effort put into them. We played some instrumental surf rock as people walked across the stage. Again, everyone’s enthusiasm was great to see. And while there was probably a weird element to the whole thing (imagine being on stage for the first time while a large group of complete strangers walk by wearing a shirt with your face on it), Mitch seemed to be enjoying himself at least enough to judge, awarding assorted DVDs and video games from his personal collection—autographed, of course.

Then, one of my constant favorites, Shannon O’Neil presented highlights from her personal tour of Manhattan, starting with a “dumb tourist trap”—Ground Zero—and asking what Mitch thought of it. She only managed to up the ante from there, visiting sites of notable murders and suicides, finishing up in Central Park at the site of the notorious jogger rape. If anything, Shannon may very well be The Dwarves of comedians.

Chris decided to bust Mitch’s chops a little, explaining that he’d done some research, and found out that he’d started an online fan group for Dave Hill, another New York comedian (joking that he was the only person dumb enough to fly out the president of someone else’s fan club). But before he could get Mitch to be too embarrassed, Dave Hill immediately came out to do a quick stand-up set of custom material (my favorite joke—“Some people think that Toledo is a crappy place to live, but, frankly, I think it’s easily the Akron of western Ohio.”) He was immediately followed by one last video (the entire cast and writing staff of SNL saying hello) as well as another quick performance by MC Chris. Before the show finished up, Chris asked Mitch if he had any final thoughts or comments to add, and he did: “I almost feel like it isn’t fair for one person to be treated this well. Thank you.” Awesome.

After we finished up, I was packing up my stuff and getting ready to go sleep on my friend Hallie’s couch for the night. I noticed people were still hanging around, talking to Mitch, and while he was playing it somewhat cool, it was clear he was pretty happy and excited. I thought to myself that since doing this show accomplished a life dream for me, it’s pretty cool to see another deserving person have that same feeling.