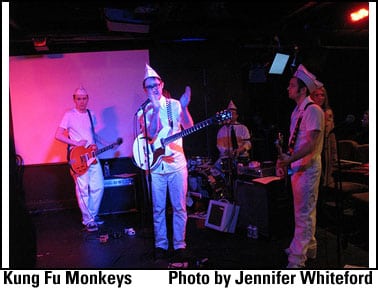 My Life in a House Band: Episode 2: Getting Pissed

There isn’t a lot I look forward to lately. I don’t think I’m alone in that – how many readers push through a crappy week of work so they can sit and relax with their friends while putting on a record? For me, playing The Chris Gethard show has been what I look forward to. To sweeten the deal this month, my good friend and fellow Razorcake contributor/Gorsky Press author Jennifer Whiteford is in town, so we’re able to hang out all afternoon before the show. But to un-sweeten the deal, I suddenly find myself feeling ill less than a half hour before show time, while out at a bar for some food and drinks. While at first I figure it’ll quickly pass, it doesn’t. I can’t help but think, “I feel like I might shit my pants,” which is already nerve racking, even before being in front of a crowded audience, and wearing solid white. I ditch my friends to hurry back to the green room where Chris is already there, in an adult diaper (I’ll get to that in a little bit), and asking, “Are you sure you don’t want to get in on this?” It’s really tempting.

I take a few moments for myself – drink some water, deep breaths, and I finally start to feel a little better, just in time to quickly run out and set up moments before people are let inside, scrambling to barely get everything ready in time. I just make it. This might just be okay.

We play our short set and finally introduce Chris and company. The first thing on the agenda is to announce the winner of the “Magic Sentra of Stories” contest, where the best essay (or equal contribution in any medium) wins a personal tour with Chris of landmarks he’d written about for Weird NJ. I’d thought about entering, and printing it out in a physical zine format, thinking I’d be a shoo-in, but I was wrong. Some of the more notable entries involved a portrait of Chris, a recorded song called “I Get Hard for Chris Gethard,” and the young lady who won entered five separate times, with at least one diorama. Never underestimate the efforts of hardcore comedy fans.

The young lady was also invited to sit on stage for the rest of the show, although that quickly lost its luster when the main event for the evening was announced: The Pissy Pants Challenge. A number of participants from the show (Chris, some Kung Fu Monkeys, and others) put on adult diapers under their pants, most of whom took a moment to show off. They had the entire show to drink as much water and pee themselves as much as possible, and the heaviest diaper of the night wins – a twenty dollar gift certificate to Boston Market. Participants were also encouraged to announce when they were peeing.

Shannon did a variation of her bit from the last show, again combing the reservation list, only this time for people who didn’t show up, and insulted them. She didn’t hold back, wishing pain, suffering, and even banning someone from the theater, but my favorite line was: “I hope your excuse is that you’re dead, otherwise you just got a thirty-three-year-old bully who’s wearing a diaper.”

Another callback from the last show, Handsome Don, had revealed that he’d been writing a musical over the course of a few years, and was going to debut a song. He was nervous about it, exclaiming, “This is going to be a fucking train wreck,” as he set up, but he got through it just fine. The moment he finishes, he exclaims “I’m pissing,” and everyone laughs, myself included, until noticing just how close we are to each other, and think “I really hope that diaper holds up.” They quickly go into presenting a video documenting last month’s contest prize, to win a sleepover at Chris’s parent’s house (which can be viewed here; http://www.youtube.com/watch?v=Xtjb7srb-A0). Of course, it proved to be awkward, from his parents not being happy about the surprise of having strangers invited into their home, as well as the constant efforts to diffuse potential fights, and Chris calmly explaining, “You’re not going to fight, because my sixty-year-old mother is asleep in this house.” He asked the two gentlemen how serious they were about fighting, but before anyone can answer, Shannon yells out, “I’m pissing.”

The interview was a bit different this month, as it wasn’t someone directly from Chris’s past. It was a young man named Zachary, who was responsible for creating the Chris Gethard online fan group, called “The Geth Tards.” Chris claimed he believed the whole thing is a thinly veiled way to actually insult him, and wanted to see if Zach could convince him otherwise. They discussed the origin of the name (Horatio Sanz commented on a group of enthusiastic fans during an improv show, calling them “Geth Tards” which stuck), and quickly turned to Chris insisting there were no reasons for him to actually have a fan base. Zach goes on to explain how Chris has never really made an attempt to come off as a “cool” comic, constantly referring to his overall nerdiness and ongoing battles with depression and not particularly feeling like he’d fit in anywhere growing up – but how he was conversely able to own it, and use it to make people laugh. I couldn’t help but relate to the sentiment, and know that a lot of other people can, too. By the end of it, Chris said, “That’s very flattering, but I don’t believe it.”

And that’s when Don yelled out “I’m pissing. Badly.”

Everyone stopped for a second, and watched Don who was visibly nervous and uncomfortable. “I think it might spill.” Suddenly, I’m not feeling so great again, and get a few dry heaves (though nothing too bad).

At this point, it’s time to prep for the judging of the Pissy Pants Challenge, so the contestants walk back stage, and the remaining Kung Fu Monkeys played a few more songs while random audience members are matched up to go on dates for Valentines Day. We can hear some yelling back stage. There was a spill. I’m simultaneously grossed out and thankful that one didn’t happen just inches away. The contestants finally come back out, their soggy diapers bagged up, ready to be weighed. First entry is six ounces, and they gradually get heavier – seven ounces, nine and a half, a full pound – but, probably not surprisingly, Don came in as the winner, with nearly two and a half pounds, causing reactions that were equal parts shocked and proud.

As for myself, I’m just happy to have made it through the show, already eager for next time.