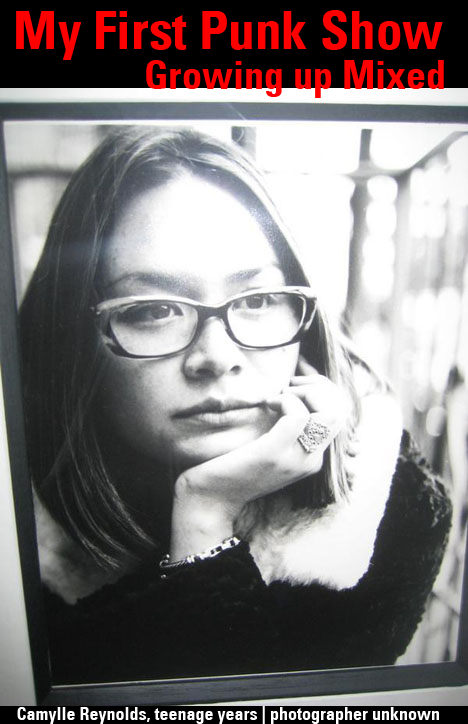 My First Punk Show: Growing up Mixed by Camylle Reynolds

My first punk show/party didn’t last very long. In fact, I never made it inside the actual party. I’m not really sure if it was fun. I can’t imagine that it could have been from my personal experience on the outside, but I can assure you there was a punk party.

We drove in from the town I grew up in, a small, small-minded farm town, to the bigger town—in the sense that it had a small junior college, fast food, strip malls, car dealerships, etc. Bigger because it had more people. It’s where the small-minded people move to be part of a bigger town. I’m sure you know this town, or at least have pumped gas in such a town, grabbed a sandwich and wondered, “Who the hell lives in this shithole?” But I digress. I was fifteen and with my boyfriend at the time, who went to high school in the bigger town, which was necessary because you simply can’t fuck anyone you’ve known since kindergarten. At least I couldn’t. Or wouldn’t. And we brought a new friend from my high school, a Belgian exchange student whom I had the pleasure of corrupting in her short visit there. We use to smoke pot on my front porch. She’d say, “Oh, I’m going to get deported,” as she’d take a long drag in and proceed to cough her lungs out.

We had heard of this party from a friend…of a friend…of the person who was having it. I had seen these punks around. They looked the part: mohawks, spiky jackets, all black clothing. Probably too young at the time for Black Flag tattoos to show just how legit they were. Honestly, I didn’t know the difference, and I didn’t really care. I was desperately into Janes Addiction at the time, and in love with Perry Farrell. Punk just hadn’t entered my life yet. They weren’t very friendly, more indifferent than anything. But they were having a party on Friday night, and we were down.

I grabbed the gin, beer, and maybe some bud in hand as we drove up. It was dark, so we couldn’t really make out who was in the front. This was no punk house, it was in a decent neighborhood; trees, quiet, where most people park their cars inside at night. Someone’s parents were not home. We got out of the car and started walking across the street toward some dark silhouettes in the drive way.

“What do you guys want?”

“We came for the party.”

“Ain’t no party here tonight,”...you could hear a faint party howl from the inside, and the muffled beat of music.

“Yeah get the fuck out of here you chink.”

I was shocked. I’d been called a chink on many occasions. Typical in my world, having grown up in a small town, usually uttered by the bastard children I had grown up with and known most my life, but we had come for a party and this dude was belligerent. I’m no shrinking violet and learned at a young age to not take any bullshit about my ethnicity from bigots. But there were like five dudes in the driveway and it was just the three of us. My Belgian friend didn’t understand this term, and was confused when we all turned around to go back to the car. Now mind you, my boyfriend at the time wasn’t handling this well. So, when we got back to the car I could hear him breathing heavily over her chatter, “What’s happening? What did they say? Why are we leaving?”

He reached over my lap to the glove box and pulled out a small camping knife and ran out of the car. I was horrified. What was he doing? What the hell was my stick-thin-130lbs-all-Dungeons&Dragons-gaming boyfriend doing?! Was he seriously going to run over to five dudes and stab some guy for calling me a chink? I quickly get out of the car and grabbed him.

All five punks came out of the driveway. I could finally make out their pale faces. Yeah, I knew these guys all right. We’d see each other at the same two or three coffee shops that every kid hung out at. The same piss stained parking garages we all skated at. The same Denny’s we’d all get coffee and French fries and smoke our $1.50/pack smokes for hours upon hours at.

“Are you fucking kidding?” yelled one dude.

“Take your chink girlfriend and go the fuck home!”

I got him back into the car. At the same time a cop car drove by and pulled up to the driveway. My boyfriend panicked. He turned the car on and threw his knife out of the window into some bushes. He drove off as calmly as he could, not to red flag the cop or anything. We all sat in silence and anxiously looked back to see if the cop was coming for us. They never did.

This was my first punk show, and it certainly wasn’t my last. I have dealt with racism throughout my life: from inane forms to the insidious. This particular memory is a relatively tame account, but something that affected me deeply. Perhaps I feel that I could have taken a more powerful narrative over the situation instead of letting myself be more of a bystander than an active member, but I was young and very naïve. I’m neither now.

My maiden name is Camylle Stevenson. My father is white. My mother is Chinese. I am mixed, I am both. Which is why I think this always stung a bit more.

My name is Camylle Reynolds. Most days I’m a yoga instructor, mother and wife. And other days I front for a punk band Bad Daddies. [email protected]