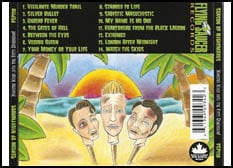 Music is a pretty huge part of my life, to the extent that I might be a bit too obsessive about it at times. While I’m rarely embarrassed by the often unpopular tunage I choose to please my ears with, there are two music-driven moments in my life that cause me pain to think about, let alone write about. Here they are:

While crowd surfing isn’t the most extreme of concert sports (unless it’s a follow-up to a stage dive off a stack of speakers), it still took my clumsy ass a while before I gave it a shot. It was back in my early days of concert going, at a big radio station-sponsored alternative rock fest. It was a sunny afternoon and I was bobbing my head to some tunes. In front of me, this big jock was politely asking the people around him if they wanted a boost to go surf above the lackadaisical afternoon crowd. This request was made in the form of a series of hand gestures that culminated in him repeatedly pointing his thumb over his shoulder. One person after the next stepped up and disappeared into a sea of butt-grabbing hands.

When he asked me, I shook my head negative. He urged me to give it a shot. It took some severe thumb gestures on his part, but eventually I gave in. Within seconds, I was being passed around above a sea of bodies. Before I could even enjoy what was happening, I found myself falling headfirst into a patch of dirt. The soundtrack to my first crowd surfing adventure: Linda Perry, former lead singer of 4 Non-Blondes.

When tax season ended a few years back, I was abruptly moved from my cushy cubicle, where I built tax forms for computer software in between surfing the web and looking at punk rock sites, to the warehouse in the back. There, I worked on a line, packaging piles of forms for delivery into whatever netherworld paper tax forms go to. I assume it’s some cave filled with backwoods accountants who haven’t learned that they can do that stuff on computers these days.

In the gray warehouse walls, all of my freedom to slack off quickly disappeared. In fact, after taking my first bathroom break, I was told upon my return that I really had to let someone know when I needed to go in the future. Fuck. Anyway, after doing this alienating, monotonous nonsense for a week, I was in the middle of wrapping brown paper around a ridiculously large batch of forms. U2’s “A Beautiful Day” came bursting through the beaten up speakers of a nearby radio. I stopped working, thinking, yes, it is a beautiful day. Why the hell am I in this dimly lit nightmare? I told a coworker I was going to the bathroom, grabbed my lunchbox and my jacket, and went home, never to return again.

Some other musical items I may or may not be embarrassed by include:

REZUREX: Beyond the Grave: CD

Here’s another band straight out of the psychobilly factory. They sound the same as all the rest of them. They’re technically adept, but who cares? I want some personality. Singing about zombie girls and devil women only goes so far. I would like to hear a song about Bigfoot doing it with a werewolf. What kind of offspring would they produce? Would they be able to produce offspring? I would really love it if, in the middle of the song, someone did a rap about Bigfoot’s armpits while the rockabilly raged on underneath. Now that would be something. This is nothing. –MP Johnson (Fiend Force)

SEASON OF NIGHTMARES: Monster Mash into the Fifth Dimension: CD

The back cover of this disc features a childish drawing of the sunset on a beach lined with palm trees. Sticking out of the sand are three wooden stakes. Each is topped with a severed human head. I don’t recognize two of the heads, but the one in the center appears to be Conan O’Brien. Has psychobilly begun a war against the humorous late night host? Are they mad because he doesn’t put on bad skull face paint and play Santo movies all night long? Maybe that’s the source of the anger that runs throughout these psychobilly tunes. I don’t think they’re angry enough, though. There’s still a lot of melody. Yes, it is angsty melody, but it is melody. I would think they would be too pissed off for melody. I know I am. Let’s go kill Conan O’Brien. –MP Johnson (Flying Saucer)

There is something casually chaotic about the depression that Pink Reason brings. Some kidnappers keep their presence hidden until they reach from behind you to put a chloroform rag over your mouth. If the music of Pink Reason was a kidnapper, he would smash your doorknob with a hammer. He would knock over a lamp as he chased you across your messy living room. It would take him a moment to catch you. When he did, he would put a black pillowcase over your head and press you to the ground as he used electrical tape to bind your ankles and wrists behind your back. You would just lay there for a few minutes, crying and listening as the kidnapper paced around the room, muttering shit that you don’t understand, knocking into things and generally making a bit of a clatter. As he dragged you out your front door, he would leave your body propped over your front steps. The cold concrete would press hard against your ribs. When you realize that your kidnapper has disappeared, you are relieved. You wait for someone to come and help you—maybe a friend, a relative, a lover—someone who cares about you. It’s going to be a long wait. –MP Johnson (Siltbreeze) 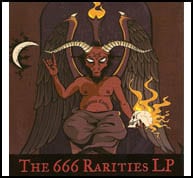 In the sick, twisted underground of horror punk, one name rises above the rest, like a severed head floating to the top of a vat of vomit: Glenn Danzig. Every horror punk band worships in a different way. Some struggle to mold themselves in his image. Others take his head out of the vomit vat and lovingly stick their tool in it while cursing his name with the utmost affection. The four bands on this disc cover both of these types of worship and various positions in between. –MP Johnson (Altercation)

For more embarrassing, painful, and/or blood-soaked reading material, feel free to step over to http://www.freaktension.com/, where you can pick up a copy of Bare Bone #8, featuring my new short story, “New Pad.”