Seething with poison and apathy, the seven band members (six perform on stage) of the Murder City Devils have supposedly turned rock'n'roll on its own deaf ear and kicked it while it was down. Every netherworld and stygian reference in the book (even the Good one) has been bestowed upon these new darlings of the media by adoring critics, who find Spencer's snarling indifference and silver-tongued, heart-on-his-sleeve lyrics nothing less than beguiling and the gut-wrenching, dirty-secret, darkest-corner-of-your-mind musical accompaniment nothing less than cathartic. Spooks and creeps, these medicine men (& woman) of hurt make snake oil of your worst pain, bottle it and clandestinely sell it back, never hesitating to share a shotglass or five of the stuff with you, huddled in the lonely alleys of your riddled brain. You'll be on your knees, repenting like a tent-revival sinner.

But crammed into the dimly-lit upstairs dressing room of the Troubadour after their sound check and during that of the other bands, these alleged muses show their true natures, which are neither as glossy nor tumultuous as they have glibly been made out to be. Sipping on Budweiser (was mine even cold?), Dann, Derek, Nate and Coady sit rapt, earnestly proffering sincere insight like seraphim while Leslie chatters ceaselessly, not quite the ice princess some have made her out to be. Spencer takes a few pulls from his chilled Jagermeister, eschewing and observing, speaking with an air of empiricism and well-intentioned conviction. I do not dismiss either the integrity or the talent of the Murder City Devils - they rock harder than most and their combination of fire and brimstone cleanses and inspires - but warn of worshiping false idols.

All live pictures by Jessica Rumblestripper

Jessica: So how'd the Pomona show go last night?
Derek: Um, it was rad.
Leslie: Better than we thought it would be. It was a huge place, kind of a big production, a big deal. We walked in and thought, "We should not be playing here." Oh yeah, there was a barricade.
Coady: They ended up pushing it all the way up to the stage so there wasn't a barricade.
Leslie: And the bouncers ended up being really cool and didn't push kids off the stage or anything. 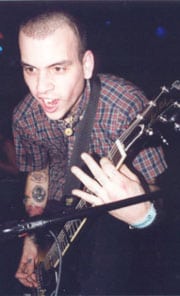 Dann: In Orange County, when we play there, they're the fucking coolest kids in the world. They don't mosh? errr whatever, they dance and have fun and they always get up on stage and hang out.
Leslie: They're having a good time, laughing, and having fun.
Nate: They're not shoving anybody or doing any of that. They're just rocking out and dancing. It's not like at Chain Reaction [a tiny all-ages in Anaheim]- it's not like the kids are just stacked up and spilling over.
Dann: Kids were starting to come up on stage and it was fun. One of the bouncers told them [the kids] to get down or whatever. But Leslie told him it was okay and I guess he helped them up there, gave them a hand.
Jessica: Being from the Northwest, which NW bands do you dig?
[The decipherable list includes: Mudhoney, Sonics, Wipers, Catheters, Botch.]
Jessica: How'd you land on Empty?
Nate: Blake came to some of our shows and liked us and asked us if we wanted to put out a 7". It was really informal. We never signed anything or whatever.
Derek: We only did that one [7"], and that's also how we got on Sub Pop.
Leslie: I used to stuff 45s for Empty. Blake said I was the best 45-stuffer there ever was.
Dann: He probably tells everyone that.
Nate: Yeah, anyone he can sucker into doing that...
Derek: It would be cool to, you know, start our own kind of label.
Leslie: It would be ideal.
Coady: It would be a lot of work but it would be fun.
Leslie: But you know what? We wouldn't have to do it - Gabe would do it.
Dann: I'm happy with Sub Pop and we've learned a lot but I don't think there's one label that would make everything great.
Derek: Sub Pop's good.
Leslie: Incredibly supportive. They've been like, "You guys want to do this, do it." Gave up what we needed. Very helpful.
[*** Another band starts sound check - noise noise noise***]
Nate: I think a lot of bands definitely have an idea of what they're going for, image-wise. Glam, '70s, whatever. There's other bands who are just wild rock'n'roll, which is what punk has always done.
[*** noise noise noise ***]

Coady: Someone usually has a hot lick [laughter] and we iron 'em out in practice, sharpen up the chops and Spencer comes in and sings over the top.
Spencer: No, we have a whole group of songwriters. We just perform them [the songs]. We have all the hits stored up, a whole CD. We'll release it in 10 years.
Jessica: When your careers are all shot to hell.
Leslie: You dick [to Spencer].
Jessica: How is performing cathartic for you? What comes out of you when you get up in front of a bunch of people with your hearts on your sleeve?
Leslie: Because none of us care.
[*** noise noise noise ***]
Spencer: Playing live is what we've always done. We're not a studio band, we're not a recording band, and I think that's a big reason why we've lasted as long as we have through everything. We just have as much fun as we can, all the time.
Leslie: So many bands are so anal and then I met these guys [laughter]. They're so much fun. Now I'm in and they're trying to figure out how to get rid of me.
[*** noise ***]

Spencer: You mean we're not in it for... [noise]
Jessica: What artists/authors, etc., other than musicians, have had the most impact on you?
Dann: I like Dan Higgs. I like the stuff he writes. He's a generally weird, awesome, cool guy. He's been a huge inspiration - the way he writes.
Nate: I feel the same way about Bukowski [heads nod all around & more noise blasts] ... or John Fante.
Derek: Yeah, Bukowski.
[indecipherable]: Marcel Duchamp, Robert Irwin and, um... [shouting]
[indecipherable]: Tennessee Williams.
[*** noise noise noise ***]
Nate: I think just having other things to appreciate and think about besides music is important.
Dann: Art and music.
Spencer: [noise] ...be appreciated forever is Jesse Bernstein. One of the only things in my life that I truly regret is being around Seattle when he was doing a lot of readings and never seeing him.
[*** noise noise noise ***]
Jessica: Why is it that a lot of people who are considered "artistic geniuses" seem to be self-destructive?
Spencer: I don't think that's necessarily true. I think that gets sensationalized, if someone dies tragically... young or whatever. But the thing is, all the people I can think of, all the ones I really respect [noise - indecipherable] were alcoholics or drug addicts or whatever.
Nate: Functional or not.
[This gets everyone talking at once, and it's hard to tell who's saying what and what's actually being said.]
Dann: Maybe they're functional, maybe they're not.
Coady: Well, what's functional?
Spencer: It's just a sad, weird thing and I don't think there's an explanation.

Nate: I think maybe some of it has to do with feeling like you don't fit in.
Coady: Yeah. [everyone nods, silent]
Dann: People push away the ... [noise]
Nate: I think it has to do a lot with that and I also think a lot of it has to do with ... [noise]
Spencer: I think a lot of people just don't know how to deal with bullshit and they medicate themselves.
Derek: A lot of people don't care.
Nate: A lot of people are geniuses just because other people don't understand what they're [the geniuses] are actually doing. If you're so into your own thing, that you're doing it to such an extreme that most people don't understand it, that's... something.
Spencer: And Jesse Bernstein, I think in the period when he wrote the bulk of his work, was actually sober. He'd been drawing on the experiences he had before.
Jessica: Did you all finish school?
Leslie: Barely. 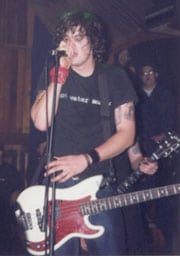 Spencer: Me and Derek both dropped out of high school. Nate's the only person who went to college, but he went to a totally bullshit college.
Nate: Evergreen. I went to Evergreen. It was like jail in the woods. All those concrete buildings. [Evergreen is known for its "create your own major" programs and its huge college-hippie population, among other things.]
Jessica: How have you supplemented your modern day education?
Spencer: I read. A lot.
Derek: I dropped out of school my sophomore year. I was out of my house. I don't regret it at all. I think I'm doing fine.
Leslie: We're all totally impressed with Derek. He's the apple of my eye.
Derek: Some people can go to school, some people can't. I have the problem where I, honestly, anything they were trying to teach, I couldn't pay attention. I wasn't interested. I know how to read. I know how to do math. That's all I really think I need to know.
Dann: I actually went to school and learned that I didn't have to go in the first place.
Derek: The funny thing is everyone I know who did graduate and went to college is pretty much doing the same thing I am.
Leslie: All my friends who graduated did, well, they're all pregnant with like five kids and they point at me and say, "Hey, there's that psycho drug girl." I mean, come on... I was 14.
Spencer: It's a good thing you were able to rise above that.
Leslie: They might look down one me, but I've had more fun. I don't care. I'm like, "Hey loser, what's up? Having fun with your kids? Wah wah! Going to buy some Pampers?"
Jessica: Are you guys really as big of drunks as you're made out to be? 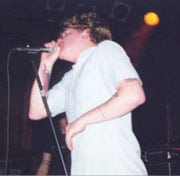 Leslie: Yes.
Coady: Yeah. Yeah.
Nate: Whether we're as big of drunks at home as we are on the road... The thing is that, from the band's standpoint, whenever we're together and playing we're drunk. We drink. It's like a party for us.
Derek: You know what's a really cool place? El Paso, Texas. The first time we ever played there, it was rad.
Coady: Is that when we met At the Drive In?
Nate: No, no. We heard about them. Everyone was telling us we had to play with this band called At the Drive In. Everywhere we went, people would tell us that. They tour as much as we do, if not more. We were always behind them on tours.
[Several heavy knocks on the door and in stumbles At the Drive In.]
Speak of the Devils.