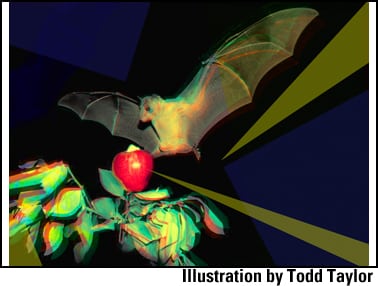 The Brazilian photographer sprinted out of our WW II-era Italian army hospital lodgings in his night shorts, brushing his shoulders frantically, as if he was being attacked by an army of killer bees. His shouting in Portuguese rang out across the Italian summer night and a few of us jostled out of our musty cots to find out what the hell was going on.

“What is it Mateus? What the devil is a morcego, for God’s sake?”
“Morcego is black and have teeth like these.” Mateus put his two index fingers in front of his lower lip as if they were vampire fangs.
“Oh Mateus, they’re just fruit bats. They don’t drink blood. They eat berries and nuts and small insects.”
“I don’t care,” Mateus said. “Tonight I sleep in the van.”
“Suit yourself. See you in the morning. Are you sure you’re going to be warm enough in there?”
“Better to be cold then to have morcegos and spiders and snakes while I sleep. Also, did you not hear the ghost?”

In the early summer of 2007, we were two American rock and roll bands undertaking a self-promoted, organized, and funded eight-week DIY tour of Europe. I took it upon myself to book the shows, drive, navigate, and handle the money. The Feelers were a napalm-breathing force of nature from Columbus, Ohio. These Midwestern boys had never been across the Atlantic and they were ready to drink, fight, and fuck in no particular order. So far, a lot of drinking had transpired. Not so much fucking. We’d fought mainly amongst ourselves in a passive aggressive, snide, ongoing commentary kind of way. But as long as the Feelers had a continuous supply of beer in the back of the van, they seemed happy. Along with being the frontman in my own band, Clorox Girls, I was their uptight tour guide and camp counselor.

We were too old to be young punks and too young to be taxpaying Americans with soul-destroying nine-to-fives. That would come later. We were malnourished and full of enthusiasm. We lived it up, playing beer-drenched, mayhem-filled concerts across Europe.

We were in southeastern Italy after completing our run in Serbia, Croatia, Macedonia, and Greece. We’d taken the ferry over from Igoumenitsa to Bari and driven a little further south to a tiny village where we were booked. The promoter had put us up in Mussolini’s WW II-era army hospital, and we imagined bloody, injured Italian soldiers with amputated limbs writhing in agony as we rolled our sleeping bags onto our cots. Various medical instruments still lay scattered, grisly reminders of the horrors of war. Years before, the villagers converted the former hospital into a community center of sorts. A few old hippies kept up the place and lived in the general’s former quarters, a daunting old mansion on the top of a hill overlooking the hospital.

After the morcego incident, we went back to bed and woke in the morning famished. Outside, it was a glorious day. Strange birds sang atop fruit trees. The golden Italian sun shone upon infinite pastures and grassy hills. We were in the middle of nowhere. And nowhere was beautiful.

“Someone could totally have murdered us last night,” said one of the Ohio boys.
“No one would find us for weeks. Those hippies smoke so much hash up there. They’d probably think we were sleeping.”

The spokesman for the Italian caretakers arrived. With his long, flowing grey beard and gnarled walking stick to match his arthritic fingers, every entrance he made was dramatic. The leader of the left wing commune looked like Hemingway with a longer beard. Plus his name was actually Ernesto, which secretly fueled my amusement. With his neatly pressed shirt and old slacks, he dressed the part of a gentleman gone astray. His eyes twinkled and he spoke softly in heavily accented English.

“Perhaps you would like to join us at the house for breakfast?” We nodded heartily and followed him slowly up the hill to the general’s former residence. An old woman was hunched over working in an overgrown garden. She gave us a wrinkled smile followed by, “Ciao.”

“Ciao,” we replied. Our Italian wasn’t great, but ciao we could do. Ernesto led us to an outside dining patio and we saw our clothes hanging from clotheslines on the roof. Puzzled glances were exchanged as we recognized our T-shirts, boxer shorts, and blue jeans swaying in the Italian breeze.

“Do not be alarmed. My wife collected your dirty laundry this morning when you boys were sleeping,” Ernesto said, easing our confused suspicion. “Do not worry. Let us take a glass of wine. We have some Chianti that we make here from the grapes in our garden.”

After seating us in the veranda, Ernesto disappeared. It was decorated simply with wooden tables and chairs, a few potted plants, and ivy that grew up the walls of the old general’s mansion. He returned promptly with a jug of wine and a stack of neon-colored hard plastic cups. He distributed the cups to us while stating each cup’s color in English.

“Red. Green. Blue. Pink. Orange. Purple.” He handed the cups gently to the ten of us. As he poured the syrupy red wine, our Brazilian Mateus snapped a few photos. As we leaned back for our second or third cup, Ernesto began to question us.

“Now this George Bush, this crazy cowboy, what do you make of him?”
“Well Ernesto,” I said. “I think it’s safe to say that none of us voted for him.”
“Marvelous,” Ernesto said quite pleased as he poured us another Chianti. “But if none of you young people voted for him, then how did he come to power?”

We explained our country’s folly of an election, all of the sinister chess playing which had taken place in Florida. We explained how George W’s brother Jeb was Governor, the hanging chads, and the mysterious dead voters. And we explained the state police profiling black voters on their way to the polls. And we explained how the Democrat had clearly won, but how the Supreme Court’s party line vote had halted any real chance for justice. Then we told him how after the planes crashed into New York and DC, nobody could even argue the point without being labeled a terrorist. Then we asked for more wine.

Ernesto nodded sadly. “This sounds a little like Italy. Here we have a very corrupt man. Berlusconi. Here in Italy we have many problems, but they leave us here in peace on our wonderful farm. We have made peace out of war. The only battles we fight are against weeds and moles in our garden.”

He smiled and we laughed, quite at ease with the six-odd cups of wine in our empty stomachs. In the distance, dust rose from the dirt road leading to the general’s mansion. A two-door black Fiat hustled up the driveway. The driver’s door flew open as the car parked and out stepped a pencil-thin man, six foot six in height. He was our Italian promoter, Rocco. He greeted us all with two kisses and a warm, “Ciao bellos!”

“CIAO!” we replied enthusiastically, a little drunk off the wine. Rocco said something to Ernesto and Ernesto went inside to fetch something. He returned with some plates, again made of this hard plastic neon material, and he began his rounds once again, this time with more gusto.

Rocco began to bring tinfoil-covered bowls from his Playmobil-sized Fiat as Ernesto passed us the plates and silverware. The warm bowls sent messages to our noses which relayed it to our wine-filled bellies. The message was that we’d hit the mother lode.

“It is small, but my mother insisted that you boys have some of her cooking. Here is the ravioli, here is the spaghetti, here is the pane, some fromaggio, sliced prosciutto, very simple. Here in the south we enjoy simple food.”

The red sauce had tinges of garlic that tickled our nostrils. Thick, soupy chunks of fresh tomato fell upon the yellow, handmade noodles. Fresh parmesan cheese was grated on top. We were almost in tears. We put our forks into the postcard-perfect pasta, imagined Rocco’s mother making this feast, and Rocco driving it to us on this heavenly hillside overlooking Mussolini’s old military hospital in the south of Italy. We were speechless.

One bite was a sucker punch to the senses. The taste exploded onto the roofs of our mouths, lingering in every crevice. The inside of our cheeks felt the garlic and it stung our stress and alcohol-induced cold sores pleasantly. The motherly love of the fresh tomatoes and parmesan and garlic was too much to bear. We continued to eat without speaking a word, pausing only to take gulps of wine. Warm homemade bread was broken, passed around, and dipped into the red sauce until not a drop was left. When it was over it was sad, surreal…. Three empty jugs of Chianti lie on the table as we mourned the gorgeous moments of the meal. Ernesto rubbed his stomach and lit a pipe, leaning back with satisfaction as he smoked.

“Rocco, we must buy flowers for your mother,” I said.

Ernesto motioned for us to follow him. We went into the recesses of the mansion where they had a room full of trombones, trumpets, tambourines, drums, and acoustic guitars. Ernesto informed us these instruments had been left behind by the general’s military band, so we formed our own marching band and marched the perimeter of the commune, delighting the workers in the garden with our out-of-tune renditions of “Louie Louie” and “Wooly Bully.” Then there was espresso on the veranda. We felt like princes, all thoughts of our friend the morcego vampire bat and the ghosts of the military hospital gone.

Then Rocco informed us it was time to head to the village for our concert. We reluctantly agreed, kissing Ernesto goodbye and promising him that we’d be good boys. As we passed the old woman finishing up in the garden, she said, “Ciao.”

Justin Maurer is a writer and musician who resides in Los Angeles. His debut chapbook, “Don’t Take Your Life” (www.futuretensebooks.com/futuret/books.html) was published in 2006 on Future Tense Books. He came of age in the Pacific Northwest where he recorded three albums and embarked on world tours with his punk band Clorox Girls (http://www.cloroxgirls.com/). After working as an English teacher in Madrid (DJ by night) and a band manager (Soho bartender by night) in London, he relocated to Los Angeles. He currently works as an American Sign Language interpreter and is presently failing to option his first feature screenplay “Pulling Teeth” to Hollywood. He sings for the punk/’60s pop band L.A. Drugz (www.reverbnation.com/ladrugz). His writing and criticism have appeared in The L.A. Record, Color Magazine, The Rumpus, Faster Times, Vice Spain, Maximumrocknroll, Razorcake, and Vol. 1 Brooklyn. See more of his writing and music at http://www.justin-maurer.com/.