Milner: A Column by Mark Halvorsen

He would roll small strips of paper back and forth between his thumb and middle finger, staring like an autistic magician. Carefully formed into three-inch-long twigs, they became the wilted and sweaty distractions he called his "twisties."

Most of us thought he was crazy. All of us knew he was weird. We would be in wood-shop class, making a gumball machine or some other approved no-brain eighth grade activity, and Milner would just sit there talking to himself. Day after day, his frail body rested on the green stool, leaning over the chipped wooden table as machines buzzed and whined spitting sawdust while adolescent boys scurried around like worker ants.

Milner continued to sit still, his thick glasses greased with fingerprints. A blue and white elastic sports band wrapped his oval head, which sprouted patches of greasy hair like pre-pubescent crabgrass. Glancing up like a baby chick, he would squint in the general direction of the authoritative voice, and quickly get back to twirling his twisty.

He carried them everywhere, tucked in the dirt behind his ear, stuffed in his backpack, or nestled in his tennis shoes (Kangaroos with the Velcro straps), bent like worms near his yellow socks and brown corduroy jeans.

His eyes would cross, trailing the paper as it swayed like a snake to the music of his isolation. He often mumbled football plays, recreating the Sunday games, every snap memorized from the weekend before.

He was so strange that most only picked on him from a distance. Only the jocks, the guys who never got expelled or suspended, the guys who used condoms when I hadn't even purchased one on a dare, could find pleasure in hurting someone so pathetic.

They would stroll by after Milner ignored them long enough to challenge their masculinity, flicking his ear or stabbing his pale arm with a pen. An occasional protest of "leave him alone" would result in an innocent smile for the ladies, and a "fuck you" for everyone else.

I sometimes wondered if my 130-pound body would receive similar treatment as Milner, except I was friends with the high school punks, hanging out in the basement practice room for Die Monster Die, listening to records and choking down cans of Old Milwaukee. I traded tapes with people considered cool and I knew the names of the blonde, leather-clad women I would've sold my soul for, who I watched for hours as they rubbed egg-whites into their boyfriend's hair, spiking up defiant mohawks. In the lowly ranks of junior high, when my smart-ass mouth got me in trouble, my greatest sanctuary was my eighth grade friend, a lumbering giant who would simply stroll up in his Black Sabbath t-shirt and smack the jock out them with one hand.

One Friday, I stared at the frail boy while he relived a Chicago Bears game by memory, his mind taking him back to the fourth quarter. While answering questions about band saw safety, my head turned from the beaten and frayed industrial safety book, startled by the energy in his voice.

"Dodges the safety, Payton to the twelve," he said, as he gripped his paper icon tightly, the wheezing in his lungs echoing through the quiet room. All of us, including Mr. Smercheck, watched in stunned silence as he crossed his eyes and began to speak faster and faster about the private world he was visiting. Suddenly two dozen faces burned into him as he stood up and shouted, "He scores!" while knocking over his stool and standing with his hands held high over his head.

Out in the cold green hallway, after Milner endured the laughter and the school counselor and the girls who sneered, after the touchdown, I watched him carefully turn the worn, paint-flecked dial of his locker, as if it was a new discovery to be handled with caution. He released the door with one precise execution. From his dented locker flowed a sea of rolled-up, used twisties, gushing onto his feet.

Already late for history and the teacher who collected whips, I walked hesitantly up to him as he stared into the back of his dark locker. Only a slight shift in breathing acknowledged my presence. Looking at the pile, which his feet had parted like Moses parting the Red Sea, I asked "What are you doing with these, Stephen?" He narrowed his eyes, turned his head and squinted up at me, trying to focus.

"This is where the dead twisties go." He offered a hesitant smile, and let me look inside his locker. Used pieces dangled on strings, were stuffed tight in ledges, and clung to the walls in sticky masking tape cocoons. The pile in the locker exceeded those on the floor, sweaty fragments of sanity shielding him from the classroom. He reached in and picked one silently from deep within the pile and handed it to me, not watching as I slipped it into my pocket.

The corridor was nearly empty. Three or four first-stringers, released early from weight training, strolled around with their hall passes, spitting water at each other and pissing in the large potted plants near the library.

They had seen me speaking to Milner. Suddenly I felt vulnerable, alone without the long-haired masses of protection, identified as one who deserves abuse. The tallest glanced in my direction, and hit his muscled friend in the shoulder. They stood waiting in front of the stairway.

"I'm screwed," I thought as I walked past the huge windows of the library, with its rows of empty tables and narrow alleys of books. I thought of the few fights I had been in, all probably ending quickly because of who I knew, not who I was. With a sigh I took the first steps toward the pack of jocks, walking with eyes straight ahead, yearning for the open door and calm boredom of the history lesson waiting in the distant classroom.

Aryan predator eyes quickly dried the life out of my mouth, burning with an intensity that added a deceptively confident swagger to my step. I found my hand resting in my pocket, wrapped tightly around the gift I had received from someone whose life is defined by the sinking in my stomach. Thinking of Milner, I stared through them to the exit, refusing to slow my pace or acknowledge their presence.

Their tapioca-skinned forms, near silhouettes in the halogen lights of the hallway, seemed to part like a bad dream from my vision. Emerging with only a few taunts of "stupid stoner" lingering in the air, I made my way down mud-stained stairs, my hand still caressing the thin, knotted treasure in my pocket.

As I left, I pictured Milner above, picking up his twisties and putting them back, one by one, each in their own place. 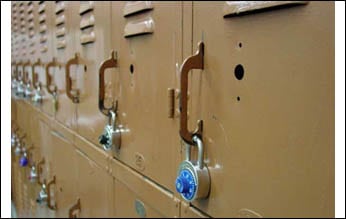