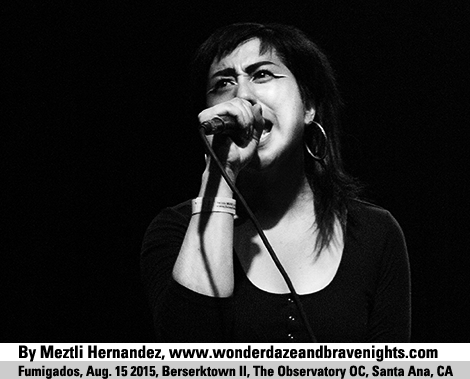 I accidentally met lead singer Erika Lares of Fumigados while we were both trying to escape the million degree heat and attempting to catch a minute to ourselves in the sauna-like restroom at Berserktown at the OC Observatory. I had seen Erika’s now-defunct band Grima at Burnouts en Baja at an art gallery space in Tijuana two years ago, and was really happy about the punx scene that had sprouted up a bunch of womxn-fronted bands in L.A.

Seeing that Fumigados’ guitarist Eddie Skitzo has been a huge supporter of womxn being front and center in the L.A. punk scene, I was also really interested in the music being created by his other bands—Politskitzo and Ausencia. It has been really inspiring for me to see womxn of different ethnic/cultural backgrounds picking up the mic and expressing themselves, regardless of what some of our traditional experiences think we should be, how we should act, and what we can say.

Fumigados’ music is intently frenetic, while the lyrics conjure up imagery of the world around them being simultaneously mysterious and lamentable, sensual and fucked up, all while revealing life’s inevitable burn.