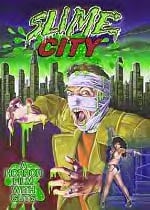 Mar 05, 2006
At work, I was called upstairs to conduct a second interview with a potential employee. After I was done, I went into the office of the young, attractive human resources lady (as opposed to the rest of the human resources ladies, who are middle-aged and have bizarre haircuts) who had done the first interview. I advised her it was my first time, so I wasn't sure what the process was. She said something and pointed to the piece of paper that I had written my notes on. I didn't hear what she said because I was focused on the gooey brown fingerprint she had left on my paperwork. Looking at her questioningly, she seemed not to notice what she had done. I scanned her desk. There were no half-eaten chocolate bars, no overturned jello pudding cups. Nothing.

Further along in our discussion, she inexplicably grabbed the sheet again and left a multitude of messy brown smears all over it.

I said nothing, but the curiousness in my expression compelled her to respond.

"I don't know what that is," she said dismissively through her shiny pink lips.

"Oookay," was my baffled reply.

Portugal. The Man: Waiter: You Vultures! (Fearless Records)
The creepy goo that came off the human resources babe's hands was one-hundred times sexier than the bile that this band is spitting all over this disc. PTM's castrated vocals and emo nerd keyboard bleeps are the sonic equivalent of gagging up a glass of whole milk that you had just ingested a few minutes ago. When it comes back up, it's still cold, which takes you by surprise. It's a little darker now, since it's pulling chunks of veggie burger and barely digested Cheerios with it. You do a little dance to make sure it doesn't splatter on your new shoes. Unfortunately, you're not a good dancer. You shake your head, knowing that you're going to have little flecks of barf on your sneakers for the next few days. Similarly, the milk-spittle this band makes will stick to your brain for much longer than you'd like.

Slime City (Shock-O-Rama DVD)
Have you ever had one of those weeks where everything was going just perfect until something came along and fouled it up? You know what I mean: You just got a fantastic new apartment. Your landlady is feeding you hallucinogenic yogurt. You're doing your neighbor, an ultra-hot goth babe with a ridiculously poofy black wig. Neon slime is oozing out of your flesh and you're stabbing the fuck out of homeless dudes and slashing hooker's throats. You're walking on sunshine! Then, out of the blue, your virginal girlfriend starts to give you the treatment. She doesn't think you should be doing that stuff, so she cuts off your head and ruins your feel good time. It's happened to everyone at some point in their life. In fact, just last week, I was up to my eyeballs in sweat-gland-secreted slime while I ate my cereal using severed hands as spoons. Wouldn't you just know it: my girlfriend stuck a blade down my throat and messed me up good. Now I'm living life by the books again. Boring. If you're like me and everyone else, you can totally relate to Slime City. High drama at its best.

The Fire Still Burns: Keeping Hope Alive (Blackout)
This rockin' emo-core group features current and former members of the following bands: Gingivitis Khan, Clown Sock Stupor, Ugly Teddy Bear Creeps, Scooterama, Flung Boogers, Mechanized Farts, Uber-Geezer, and Flat Brain Panel. As you can see, that's quite an impressive roster of talent, so there's really no reason for you not to by this CD. In fact, if you don't rush out to the store and pick this sucker up, you're turning your back on all the good things that these legendary artists have contributed to the world of music. It doesn't matter whether or not Gus Shindig was Gingivitis Khan's lead singer or the bass player on their third album, Don't Stink Now. The point is, he was in the band! Don't you like Gingivitis Khan? You can't tell me that you don't listen to the Ugly Teddy Bear Creeps' Cancer: It's What's for Dinner album at least once a week. You might as well throw that album right out the window if you're not going to buy this CD, because the power of Vic Zimbo's drumming on that album obviously means nothing to you. You're a traitor if you don't purchase this CD. Everyone hates traitors.

Before you go to the store, stop by www.freaktension.com to read "Punk Rock Mummy," the world's best story about a bass-playing, gauze-coated corpse.

Remember, as long as it's completely dried up, there is no brown goop that can bring you physical harm.