Photos by both Bradley Williams and Land Keller. They took turns holding the camera and taking shots.

We were standing to the back of the crowd when Ramblin’ Jack Elliot walked on stage. Keller lifted his camera to get a shot. The flash goes off and Ramblin’ Jack’s voice goes out over the mike saying something to the extent of: “I don’t take well to them flashes while I’m up here. They make me forget the songs and then I might go psycho on you.” We didn’t use the flash again. Two others did try and both times they met with threats from Ramblin’ Jack. 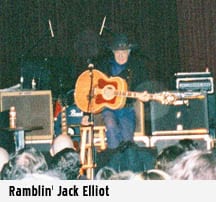 I’d never listened to Ramblin’ Jack Elliot before so I knew the broad side of nothing about him. He sat in the center of the stage on a stool with a guitar – an old man in a cowboy hat picking and remembering his way through songs. No backing band. I suppose he didn’t need one. I don’t know if he ever had one.

Before he took the stage, the announcer who looked like the lead singer from Loverboy, mentioned that Ramblin’ Jack used to run with Woody Guthrie and then he rambled off some other facts and footnotes; none of them sticking to memory like the mention of Woody Guthrie. I’m not going to pretend that I’m all up in Woody Guthrie’s collected recordings. I haven’t read anything on him. I have heard little from him and know even less about him. I’m sure this will fade in time. I keep meeting people who seem to like him. “This land is your land.” Hey, I was singing that in the first grade too. Anyway, Ramblin’ Jack gave Woody Guthrie credit before almost half of the songs that he played. There were quite a few long narrative tales of death on the plains and young wives won in a game of cards and dead before any good could come. It was like siting outside with an old dusty man worn almost fully to the bones telling stories of times and spirits that have somehow slipped from the forefront of what many would consider America.

The Blind Boys of Alabama 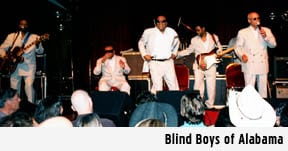 I don’t know if anyone in LA suspected by coming out and paying the price of admission that they where really going to church.

I’m hesitant to say that everyone, from the guy in the Hells Angels jacket down to the little old blue hair ladies, where not expecting what the Blind Boys of Alabama delivered, but still there was that feeling that everyone got taken back on their heels.

They came out on stage following each other in a line, each with his hand on the shoulder of the one leading, as they made their way up to the three microphones that stood in a line on center stage.

I wish I could give a description of each of the Blind Boys, but I don’t think I’d be doing them right. I’d feel like I wasn’t telling it like it is. It’s something, it’s for real. There is no way that anyone could start-up a group like this today and come anywhere close in the next ten years.

The Blind Boys of Alabama have been around since sometime in the 1930s. How many other groups have been performing for that long? I don’t know of any, but that’s not saying that there isn’t or will never be. 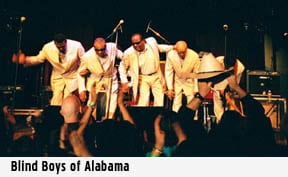 The crowd was getting its drink-on nice and heavy for Merle Haggard; most were already starting to swagger when the Blind Boys started up.

I don’t think that quite gets it. It was more like having a beer in church and no one saying a thing about it. 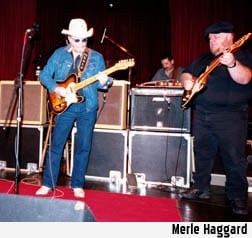 I called my mom up on the phone to tell her that I was going to see Merle Haggard and she said to me that’s better than getting to see the president (that’s the proverbial “president” as a symbol not as the Jr. Shrub). “You know Waylon just passed on,” she said. “Make sure you don’t mess up and miss Merle.”

Although I wasn’t about to tell her in these words, but there was no way in hell that I’d miss seeing the Hag.

I have high respect for country music before the 1970s, but I didn’t hear it played much when I was young. I knew about it, but it was people like Merle Haggard, Waylon, Johnny Cash, and Hank Jr. that I heard a lot of. So I grew up sort of bent that direction. I tried to get rid of that bend or at least cover it up later on, but that’s a story for some other time. The thing is that I came to my senses in time for luck to fall my way (care of the multi-headed Razorcake media monster) and I was in the show for free.

I was situated up front, next to a bunch of men in cowboy hats and their wives, each one of them keeping a comfort zone around themselves for as long as possible. It was a different crowd than I’m used to seeing. As I mentioned before, not every show has Hells Angeles and little old ladies in the mix. 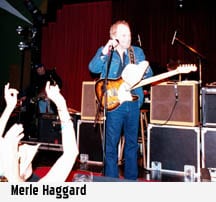 Merle’s band were called the Strangers and they consisted of: guitar, (it was a Telacaster (makes sense in a second) his guitar strap read “Redd” on the front and on back said “Telawacker”; then there was a pedal steel, drums, bass, sax/trumpet, and electric fiddle (I don’t like electric fiddles. Something about them creates an air of distrust. I didn’t dwell on it and for all he soloed it really didn’t matter. There may be no more truth to this than there is fire in water, and since I don’t have Stunk and White busting my balls on this one, I’ll let my opinion stay).

The Hag played for a little over an hour. I’m not going to list what he did play, but all that I noticed I didn’t hear was “The Fighting Side of Me.” He did sing a short improvised song about Osama bin Laden, and let his feelings on Shrub Jr. be felt.

What got me was he played and sang the first few verses of “Ring of Fire” by Cash, then stopped as the crowed started to chime in, looked up, half-way held back a laugh, and started into a different song. I wonder was this done to fuck with the crowd. Make your own call.

There was no encore. That was fine. The light came on and the frontman from Loverboy came out on stage and started helping to pack up.

It’s strange, but coming away from this show I feel like I might have learned something. I don’t know what yet, but I don’t usually get that kind of feeling after a show. Maybe I didn’t learn a damn thing. Maybe I’m going crazy. I do feel influenced and energized by other bands, but still it’s not what I’ve been used to lately. It’s a particular feeling that might only come from seeing something for the first time that you didn’t know existed and being taken way back by it. Maybe it has to do with hearing Merle Haggard, at different points for twenty-six years, and then seeing him live. I’m not sure.

These are some of the last of the originals. If any of you ever get the chance to see Ramblin’ Jack Elliot, the Blind Boys of Alabama or Merle Haggard, and you don’t take it, you will regret it. I’m serious. A mistake like that and it could haunt you for the rest of your days.