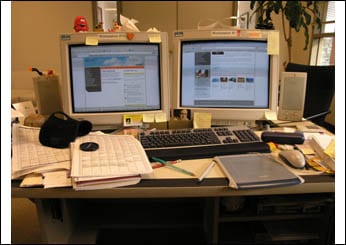 I wrote this seven months ago:

"You have a whole year to watch me fail.

"Guess who went ahead and decided to fuck herself in the ass and instituted a ONE-YEAR PLAN? My naivete is so laughable.

"So, I'm at work. Going nuts. Like quiet-fighting apeshit nuts. I can barely do any work. On average, I probably do about thirty hours of actual work a week, while I am physically here for more than forty hours. So here I am, stewing about this 'plan.' Plans are ridiculous lies to ourselves and I decided to shit on my future with one. A big floating turd of a plan, too.

"I have a year to save up a bunch of money, to get rid of as many possessions as I can stand, and then call out Gus on his open invitation and move to Portland. I have a year to work my last office slave job, retiring from water-cooler politics indefinitely, even if it is working for Big Bird. I have a year to hash out my love/hate affair with Los Angeles, my family and the nostalgic suburbs that nourished me. I have a year to not run into boys that I had already run into before and to just leave well enough alone. I have a year to tie up loose ends and cut up new ones to leave them flapping in the wind.

"I have a year to curse myself for deciding to make a fucking one-year plan.

"Just last week, Boss Lady offered me a promotion. A fucking promotion. I had to be honest, I told her that I was only going to be here for another year (as I had committed to a two-year stint when they hired me last summer.) I said, 'If you think I can still handle these responsibilities and you feel comfortable with me in this position knowing that I'll only be here for another year, I can do it.' She gave me the promotion even with my caveat. Look at me with a premise for a career and ditching it for some semi-delusional notion of never really working again. I am an American after all, check out my first-world privilege."

Here I am, present day and more than halfway through the plan. I'm sitting here in front of my dual monitor workstation, two screens that provide double the workspace. It's supposed to increase my productivity, but it feels more like a cinder block wall used to shield my view of the outside world where people don't go blind from staring at a computer. I mark the days off paycheck by paycheck, daydreaming about my early retirement.

Yup, I've taken to calling my decision to abandon the "real world" my retirement. I figured that I have the rest of my life to work, so why not enjoy living now? Folks chip away at a mortgage/credit card debt/car payments for fifty years just to be able to afford this and I'm jamming all those fitful mornings of never wanting to return to work into a year's time.

I'm progressing slowly: some money is being saved, Goodwill donation bins are being filled with things I bought from there in the first place, and doubt takes a backseat to my wide-eyed schemes of living a dream.

Everyone has a dream. Don't they?

The other day the Manager and Producer returned to the office from a Starbucks run. They were in the middle of another life-pondering discussion. The Manager, who often scoffs at pretentious-black-turtleneck-public-radio-listening-yuppies, is undeniably the exact pseudo-liberal-Saab-driving-world-music motherfucker he abhors.

He lamented, "I'm so tired of people who don't have real jobs because all they want to do is to pursue 'their dream.' Do their 'art' or whatever."

His bitterness stems from his own lack of any morsel of creativity. As my Secret Santa a year ago, he bestowed upon me a ten dollar gift card to Starbucks. I wonder if yuppie-types just buy a stack of gift cards to establishments that glossy magazines tell us we should patronize. But I digress...

I sat in silence and listened to his half-baked, half-serious, existentialist theory.

"You gotta think that everyone has a dream," he continued. "So, you're competing against everyone else in the world. What is that? Six billion people?"

"But that's the thing," I interjected. "Not everyone has a 'dream.'"

"Yeah, what's your dream?" The Producer asked the Manager.

He thought for a moment before muttering, "To have all my dreams come true... to be happy."

Before he retreated back to his office, the Manager scribbled a daunting equation on the white board: 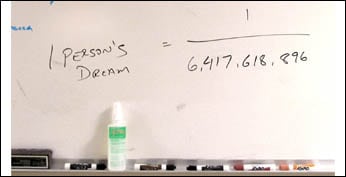 So what's my dream in the making? Why in the hell do I have a one-year plan? Here's another cop-out answer: I just don't want to end up another drone without a dream.

And I'd love to stop clocking in and clocking out and just watch the sunset in all of the world's time zones.