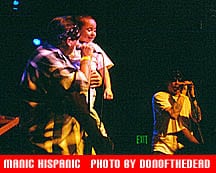 I hate to say it, but I’m reaching twice the age of the average punk kid at a big show nowadays. Every time I go to one of the bigger shows, the audience looks like young children to me. My friend and I were in line and we were behind a group of “Patch Punks” with one of their parents. I, being bored, struck up a conversation with the parent and told him how cool it was of him to take his kids to a show. He told me that he wanted to see and know what his kids were into. My parents would have never come with me to see what I was into. He told me how old he felt around all these kids. He mentioned that his scene was the US Festival that happened in 1982. I told him my friend and I attended that music festival and he had shock in his eyes. It wasn’t punk, but we were there. The line finally started moving and we proceeded into the theater. 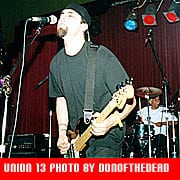 The line-up changed at the last moment, I guess, because Union 13 ended up opening the show. The marquee listed The Distillers opening. I haven’t seen Union 13 before, but I do have one of their records. I liked East Los Presents…., which is their 1st record. The crowd was thin but the majority of the audience was Latino and was ready to support. They started their set with a ton of energy and the crowd responded by forming a small but energetic pit. I ,on the other hand, was not too into their live set. I thought they would come off more powerful in comparison to their recordings. Maybe I needed a few more beers. I took some photos and proceeded to the bar. The kids did sing along for those who knew and the pit kept going in that clockwise circle. I have to see them another time to give myself a better opinion. 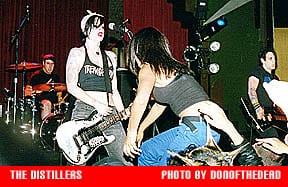 The Distillers were next. Has anyone ever compared them to Hole? I haven’t read it anywhere. Singer / guitarist Brody had the mannerisms of Hole singer / guitarist Courtney Love. I had that discussion with my friend and he agreed with me. They were similar but had more energy and speed minus the guitar wanking. The crowd doubled in size during their set. While they were pummeling through their set, young girls would jump and would get starstruck and either sing along with Brody or hug her with glee. I found that to be hilarious. Brody payed no attention and seemed detached and just kept plugging along. The stage was a constant flow of admirers and stage divers. The set was mixed with songs off of their self-titled CD and the new one titled Sing Sing Death House. Good, energetic set that all at hand enjoyed, myself included.

Manic Hispanic took the stage to close the night out. The club was probably 2/3’s full. I’m glad they didn’t cancel due to bad ticket sales. They all got to their spots and posed as an anthem-like instrumental played through the PA. The crowd energy was building. As soon as the music ended they blasted into their rendition of “Wasted.” I and the crowd went absolutely nuts. I shot pictures as the played songs from their two releases, The Menudo Incident and the most recent, The Recline of Mexican Civilization. Songs like “Mommy’s Little Cholo,” “Uncle Chato’s Garden,” “Mexican Society” and “East LA” were played. 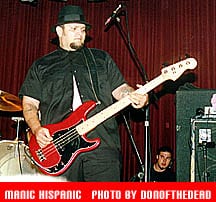 Out of film, I parked myself to the side of the stage and stood on a chair to get a good sight line. I, smiling like a stupid monkey, watched as they desecrated many a punk classic. The effects of a minor drinking binge were kicking in full force and I was singing along to all the words of each song that I knew. I scanned the audience and saw that they were having as much fun as I was, minus the one security guard who seemed like he was serving a death sentence. Crowd participation was encouraged.

One of the microphones seemed to make it into the audience so that they could sing along. Beer and water was being sprayed by the audience and the band. For me, I wish it could have gone on forever. I was having too much damn fun. But the fun had to end. After the two encore songs, the lights went on and everybody went on their way. 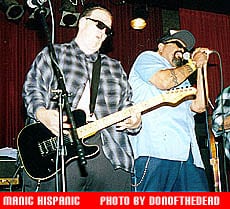 I hope the kids who are into Manic Hispanic seek out the originals of the songs they cover. They will see how great the originals are and find out about many great bands from the past. In turn they will find out the great history of what we all call punk. I sound like a jaded old man. Oh well. I just hope that Manic Hispanic plays again because I will be there!

ALDERMAN SWINDELL: Loved Me Back: 7”