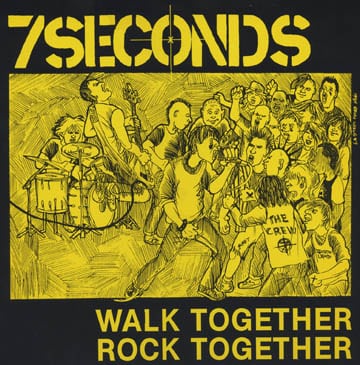 Greg: How old are you?
Brian: I am thirty-nine years old.
Greg: What is your Zodiac sign?
Brian: I am a Libra.
Greg: What does your dad do for a living?
Brian: He sells insurance and he's a doctor but he lives in Vegas where anyone can be a doctor. He is not a real doctor. My mother lives in Vegas too and also is some sort of spiritual doctor or whatever. In Las Vegas they have all of this mystical stuff and spiritual stuff to balance out all of the soul-destroying crap there. I hate that place, actually. To each their own.
Greg: Do you have any brothers or sisters?
Brian: Two brothers. I'm the middle
Greg: When is your first memory of drawing something and what was it you drew?
Brian: I used to draw the Zodiac signs. My mom keeps reconfirming that. So it must be true. Actually I do have a few memories of going up to my family members and showing them these things. What kind of kid starts off learning how to draw by drawing Zodiac signs? Me, I guess.
Greg: When did you start playing the drums and what inspired you to do so?
Brian: I guess I started off arranging all of these paint cans in my parents' garage and then I would use some chopsticks as drumsticks and go insane singing all of these demented songs that I would make up while my little tape recorder was rolling. It is probably a good thing that they are all long gone to posterity. I was like ten years old when I was doing that. I got a drum set when I was in tenth grade and I realized that I had some sort of knack for playing them. I realized this when I learned that I could easily emulate the drum introduction for Judas Priest's Living After Midnight, which had just came out at that time. For some reason I thought that it was really tough. I was inspired because I liked music so much and always wanted to play music in a band. 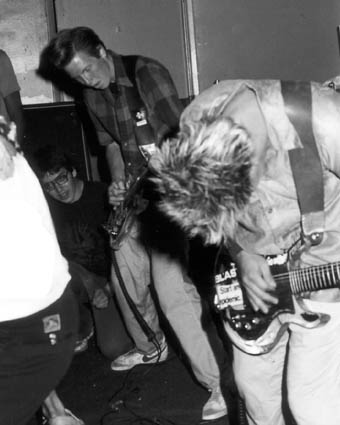 Greg: When was Scared Straight born?
Brian: The end of '83. I wasn't involved at the time. Before that Scott Radinsky and Dennis Jagard were involved in a band with a few other guys called SOF. This stood for "Secure Our Future" or something like that. They played at a battle of the bands event held in a rolling rink in Simi Valley. I remember how excited I was to watch kids play really honest-to-god punk rock. I basically made friends with them by drawing a picture of them playing, which they thought was pretty cool. So, I was "in." I always used my artistic thing as the one way I could get involved with things. I was a real big fan of theirs and after a few member changes and Scott moving to singing duties, they asked me if I wanted to join. It was towards the end of 1984 and I was really excited about it. It was a hell of a lot of fun, my first band.
Greg: What the fuck is Nardcore?
Brian: Nardcore is a nickname for all of the punk bands that came out of nearby Oxnard. There were a lot of good bands out there: Aggression, Ill Repute, Dr.Know, Stalag 13. They had a nice scene happening and we were in awe of most of those bands. RKL were from nearby Santa Barbara, but were considered a part of things. RKL were the best band, I think.
Greg: Name some Nardcore bands you played shows with.
Brian: I think we played with everybody there at least once but I am not one hundred percent sure. We were pretty close to Ill Repute at the time. They liked us and took us with them across the country on tour in 1985. We had a great time. I think I was kind of scared of some of the other bands, like some members of Dr. Know and RKL. I was basically a really naive, dorky kid and these other guys in those bands did drugs and drank a lot and seemed a bit more around the block then I was, so I was kind of intimidated by them. I think my first real show that I ever played was in Oxnard, actually. It was at the end of 1984, and I remember it because it was a blur and it was also the night that Vince Neil had killed Razzle of Hanoi Rocks.
Greg: Have anything good to say about Mystic Records?
Brian: They put out our record. I'm sure nobody else in his or her right mind would have done that. I never harbored any ill will towards those guys. It just seemed like to me that they were just putting out as much stuff as they could, as fast as they could and as cheaply as they could. All of us pretty much knew that this wasn't going to be some moneymaker type of situation. I have a hard time believing that they made a lot of money off of all of these sort of generic and premature hardcore bands that they snatched up. We were just one of them. Maybe I am wrong in all of that but at the time all we thought was,
"Man, it's cool to have our own 7" out! Alright!" Now it is like, who cares, you know?
Greg: When you were in Scared Straight, who was your favorite hardcore band at that time?
Brian: Black Flag. They were the first band that I heard and I was just really into them for many years. I was with them when they did the My War and Slip It In stuff, too. I kind of thought things were cooling down when Loose Nut came out. I always thought that Black Flag almost broke up in time... almost!
Greg: How did you hook up with 7 Seconds and end up doing the cover art for them?
Brian: I band-slutted my way into that one. Basically I just gave them all blowjobs until they relented. The rest is history. 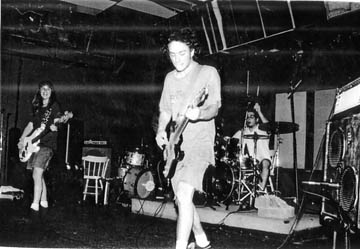 Greg: How did you meet Buzz Osborne from the Melvins?
Brian: The Melvins played in Raleigh a month after I moved out here in the spring of 1986. They were on their first tour across the country, with RKL in tow I might add. Everybody hated them back then. They were clearing halls across the country but I thought that they were incredible. In my mind, they took what Black Flag and COC did and made it better. Plus they were cool guys. Dale, Matt. I remember that me and a friend of mine named Chris interviewed them for our respective fanzines that we were doing at the time and I was really impressed with Buzz and his somewhat cynical view towards the punk rock scene back then. He said really prophetic things like, "All of you kids out there listening to hardcore should just start listening to the Stooges and the MC5 now because you'll just be listening to them in a few years anyways." That is exactly what happened. I have been friends with those guys ever since. Buzz and Dale came to my
wedding. I still think that they are a great band, one of the last actually.
Greg: Did you really move from California to North Carolina because of COC?
Brian: That was sort of the catalyst for moving, my friendship with them. They were an incredible band and were some seriously cool people. I visited Raleigh in the summer of 1985 and was struck with how nice everybody was and how cool things seemed to be there. It was a lot different that Southern California, that was for sure.
Greg: Try to explain that dynamic to the dear readers.
Brian: Well, let's see. On every level it was a lot different. It was a smaller city for starters, a real different mentality. Everyone seemed so nice and friendly.
Greg: Like what was the difference between the Nardcore scene at the time and the Raleigh scene?
Brian: It's all the same man. There's no difference. I mean, of course there were some differences but really it was all of the same in the regard that everything was sort of set up in the same way. There were some bands, and then there were the handful of people that made things happen, like putting on shows, making zines, writing letters to other scenes. And then there were the rest of the kids that maybe didn't do anything but still supported the shows because they were fans. So in that regard, that is what was the same. It was this global tribal sort of thing going on, and it was an awesome time. But those are the similarities. It was all really small, nothing like whatever is considered punk rock today, that is for sure. So it is pretty funny to think that I moved out here because of COC, but it was also 'cause of punk rock and letter writing. I could have ended up anywhere because of punk rock and eventually I ended up in Raleigh. 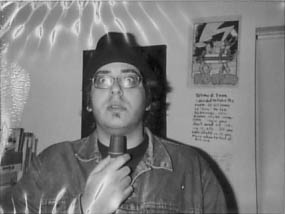 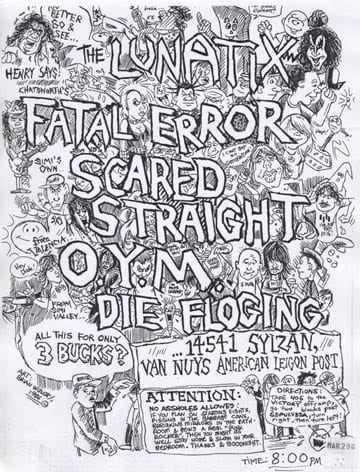