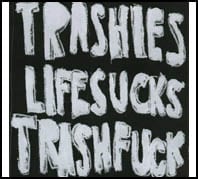 You will recall that, last month, I was talking about how well I got along with everyone I worked with at a factory a few years back…

I took a day off to go to my hometown. On the way there, I ran into a deer, totaled my car, and just about got myself and my girlfriend dead in the process. Luckily, I was just a half hour from my parents’ house, so my mom came and picked me up. When I got home and all the madness surrounding the accident died down, my mom told me my grandma wasn’t doing very well. In fact, the next day, she died. Obviously, I wasn’t able to return back to work, so I called in and said I wouldn’t be in for a few days, because I wanted to stay for a funeral. When I returned to work, everything was fine… until the next time I asked for a day off to go back home, at which point, Don, the manager, said, “Just make sure you don’t hit any deer or have any grandmas die this time.” That is officially the coldest thing another human being has ever said to me in my life, and I’ve had a lot of people direct a lot of coldness my way.

In the shipping room, we had a big box that we threw cardboard in. When it was filled, someone had to take it outside and throw it into the big recycling dumpster. To ensure that job was done, someone made a big sign that hung from the box saying, “Please empty when full.” I grabbed my friend the permanent marker and wrote, “and eat pie,” just below it. My team leader approached me the next day, pissed as all hell because of my harassing note. It turned out that there was a lady who worked in the parts room who ate those gooey Hostess pies every day at break. She thought my sign was an insult about her weight.

One day I just stopped going in to work. Not surprisingly, nobody called me to ask where I was, or inquire about my well being, or ask if I was going to be coming back. I’m glad they didn’t.

Does anyone remember the old Victory Records? You know, the label that released stuff by Snapcase, Warzone, Earth Crisis, Strife, Integrity, etc? Where the hell did they go? Back when they were releasing that stuff, I was constantly reading negative press about how bad their releases were. Zines with no grit were constantly criticizing the label’s devotion to mosh metal, telling their audiences to look elsewhere for the good stuff. I don’t think those assholes even listened to Snapcase once. They probably listened to the Get-up Kids. I blame them and their bad vibes for what Victory has become. While I’m no Hatebreed fan, I would much rather hear their pointless aggression than the pointless whining of bands like The Sleeping and everyone else that the label releases now: Albums that end up in the “Hot New Releases” section at Target. Now, I’m not against music being sold at Target—hell, that’s where I usually get my Shakira CDs—but it doesn’t mean that you’re getting a challenging, independent album. The moral of the story is, decide for yourself what you like, don’t listen to zines, don’t listen to me (even though I’m typically more right than everyone else), just support the hell out of what you like, or else it might not be there anymore.

You walk into a giant warehouse that seems to be made completely of sheet metal. At the front of the room is a band rocking out on top of a heap of garbage. You see banana peels, toilet paper rolls, severed hands. You see a guy pounding on a keyboard. The next thing you notice is that the soles of your shoes are sticking to the concrete floor. You look down and see that there’s a thick coating of green-ish stuff that looks slightly like bile. You groan, but you can’t hear your own grown over the squeaky, messy rock oozing from the guys on the garbage pile. Walking into the crowd, you notice that everyone is wearing light blue jumpsuits. They’re all tall and skinny and wearing glasses. They’re dancing around, jumping up and down, spinning in circles. You find it odd that their dance involves shooting streams of vomit from their mouths into the mouths of others. At first, it makes your stomach hurt. Then you realize that’s a good thing. You start jumping up and down, rattling your guts hard. The burning comes up your throat and you spray it at a tall blonde girl next to you. It splatters on her glasses and she smiles. You think you’re in love. With the Trashies.

While we’re on the subject of barf and bile, I have a blog that you can link to by going to http://www.freaktension.com/. I’m not going to say it will change you’re life, but I am going to say that you can’t just walk up to someone in a public place and ask them if they don’t mind having you measure their pubic hairs… without repercussions.