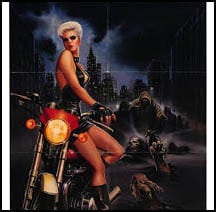 Making Friends at the Factory (Part I): A Column About the Hazards of Workplace Smiley Faces

My job at the car wash factory didn’t even last a year, partially because it was a pile of lame, but mainly because my awkward social skills and/or those of my co-workers caused impressive amounts of tension. Here are some specifics:

I worked in the parts room. Each shelf corresponded with a letter that was crudely drawn onto the white wall directly across from it. I noticed that O had a tiny dot inside of it, possibly from where a nail had been pounded into the wall and removed. It didn’t work for me aesthetically, so I drew another dot next to it and a semi circle below it, turning the O into a smiley face. While this was undoubtedly a minor infraction, my boss—a massive, bearded psycho who bragged about being run out of a town after bitch-slapping a bad driver directly in front of a cop and said things like “I’m gonna vote for George Bush because I like guns”—took particular offense at my art. He bitched at me for two weeks straight about it, asking me when I was going to wash it off. I told him “no” every time. He always growled and walked away, mumbling about how much of an ass I was.

Permanent marker has led me astray many times. The next was with Vince, a knotty, old grump who worked side-by-side with me in the receiving department. In retaliation for a fairly benign insult he made about my curly hair, I wrote: “Vince has gay sex with Tom in the storage closet” in very large letters on the table we all worked around. While not politically correct, this type of comment is sure to be overwhelmingly offensive to the majority of blue-collar, right-leaning, Green Bay factory workers. Vince stopped talking to me after that, making work difficult. Tom, however, didn’t seem to mind.

My tension with Vince forced me into the shipping end of the parts room, where I thought I would get along just fine. We had a radio with a CD player and we all brought discs on rotation to rock out to. After being subjected to a lot of Skynyrd and Staind, I brought the Ramones and cranked it. When I came back from doing business elsewhere in the factory, Dave, the guy I worked with back in shipping, had turned it off. I turned it back on. He shook his head and turned it off. Of course, I then turned it back on, louder this time. He threw the radio onto the ground and said he was going to kill me.

If threats were acts, I would already be dead and oozing up a real good stink, and…

The Cardinal Sin: Hurry Up and Wait (Gray Flight Records)

…if threats were acts, The Cardinal Sin would already be hanging upside down from streetlights with their tongues yanked out and fed to a barrel of potato bugs. I understand that it’s fun to be in bands. Hell, I’ve played with bands. Well, at least I’ve stood in front of a basement full of kids and smashed boards into the ground while my friends rocked out behind me on more traditional instruments. I’ve done this one handed while my other hand controlled the smoke machine. I’ve done this in the dark, guided only by the minimal light provided by neon goo that spurted out of party favors when I smashed them on the concrete. I’ve gotten splinters deep in my flesh. I’ve bruised my hands so bad I could barely close them the next day. I’ve been told to stop because I was scaring people. I didn’t stop. I didn’t stop because I love rock and I love smashing stuff. And that’s why I hate the Cardinal Sin. They clearly love being in a band. They love playing music. Do they love rock? Do they even know what rock is? Last I gauged, rock didn’t involve squealing, crying, dribble wuss shit. These guys don’t rock. They don’t have the splinters.

4.) Slime City: The black clad, wig-wearing goth chick next door breaks into a gyrating spazz dance that primarily involves rubbing her hands all over herself. Somehow, it seems to hypnotize the guy she lives across from.

3. ) Night of the Demons: Girl gets possessed. Girl spins and dances and so does the room it seems, all while “Stigmata Martyr” by Bauhaus is throbbing in your ears.

2.) Return of the Living Dead: Trash loves the dead so much, she strips down to nothing and dances insanely on a coffin just before the zombies start their waking stretches.

1.) Necropolis: Inexplicable and bizarre is the only way to describe the main character’s dance scene in this one. She’s in her hideout putting on nylons when she starts a spastic, severely ‘80s dance. She is neither possessed, nor trying to possess someone else. She is not excited. In fact, this movie is characterized by her general lack of interest in the whole ordeal, even when she somehow grows extra boobs. Nonetheless, this dance scene is mesmerizing.

If the key is inside you. You better think about how you’re going to get it out without having to put your hand somewhere gross.