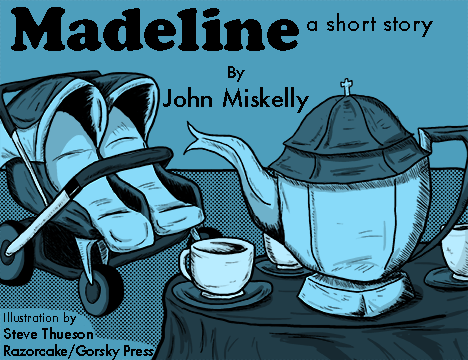 The pram bounced and jigged along the cobbled street like a harmless train crash. It was a two seated affair. Gareth’s son Fredrick occupied the left passenger seat while William, emanating a protracted vowel sound and enjoying the cobble-induced vibrato in his voice, sat in the right.

“I can feel it in my bum. Can you feel it in your bum mummy?” asked William.

Sophie was walking alongside the pram, tugging a reluctant Verity behind her, the eldest of the three children at ten years old.

“I can feel them in my shoes William. And we don’t talk about our bottoms in public.”

“I thought we were getting my new ski jacket first?” said Verity, “this isn’t the way to Snow and Rock.”

“We will after we’ve had a quick look round the shops on The Crescent,” said Sophie.

The Crescent was one of the most prestigious streets in Little-Quibbling, adorned with some of the most expensive but adorably darling boutiques in the whole county. It had featured twice in The Times Most Quintessentially English Café Views, while Little-Quibbling itself had earned several mentions in a Guardian weekend color supplement article about bespoke and ethically produced artisan kitchenware. During her many visits over the years Sophie had developed a good rapport with many of the shopkeepers.

The tea set took pride of place in the window of Wright and Son’s, one of Sophie’s favorite shops on the Crescent. It was a lovely collection. The impossibly delicate bone-white cups were stacked on top of each other and tilted this way and that with charming abandon. The saucers sat beneath them, the hand-painted detail round their edges matching those on the rim of the cups. The teapot sat behind and slightly to the left, stout and firm like a proud parent.

“That’s nice,” said Gareth. Sophie stopped dead in her tracks at the first sight of the set. “Really nice,” he added.

“I wonder where it’s from, it looks…ethnic,” she said, choosing her words with care, “or at least international.  Maybe Far East Asian?”

“Could be,” said Gareth, pulling up the sleeve of his rugby shirt and checking his watch.

“It’s really nice Soph, but that price, and the boys are getting a bit restless.”

“And we need to get my ski jacket,” said Verity.

“That’s true, we do need to get Verity’s jacket.”

“Just a look,” said Sophie, not waiting for an answer.

From the inside the shop seemed sizeless, the walls obscured by tables and shelves of semi-functional household ditties just like the tea set. Even the ceiling was hidden behind hanging bird cages, saucepans, bunting lampshades and various other hand-crafted, hand-painted objects, all sporting their own hand-written price tags tied on with twine.

Sophie saw none of these though, heading straight for the tea set and gazing at it in awe. Gareth followed several steps behind with the pram, desperately trying to contain William and Fredrick’s grasping, swiping hands.

“Ah, I see you’ve spotted our latest import,” said a voice from within the clutter, “Kashmiri, bought in by a retired Light Infantry officer. I checked its authenticity and it’s the genuine article.”

A large middle-aged man appeared with a wispy white comb-over and a chest-length beard flecked with the remnants of its original orange.

“I don’t think I’ve heard of any china coming from that region Mr. Wright,” said Sophie.

“Well it really is very rare,” said Mr. Wright hurriedly, “hence the price. Also it’s disputed land of course, very hard to get things in and out, a lot of items lost or destroyed over the years, a terrible business.”

William gurgled through a mouthful of his own fingers, then extracted his wet digits and tried to drag a box of silver cutlery off a table.

“Whoops!” exclaimed Mr. Wright, “you’ve got a feisty one there!”

“Sorry about these two,” said Gareth. “We don’t touch things that aren’t ours, William!”

“No matter,” said Mr. Wright, his gaze lingering on the boy for a moment. “So are we interested?” he said, turning his attention back to Sophie.

“You can’t budge on the price at all?”

Mr. Wright stroked his beard in pensive thought. “I could probably take fifty off.”

“That’s very reasonable of you. But you couldn’t make it seventy?”

“For you Mrs. Farthingwood, I’ll go as far as sixty.”

Sophie fixed Gareth with what she’d known in the past to be a failsafe look, something between wistful longing and a plea to reason.

Gareth looked at him blankly for a second. “The nearest cash point’s

“And we need to get my jacket,” piped up Verity, who’d been exploring some inner enclave of the shop.

“And we said we’d meet the Barton-Swaths for coffee and a bite before the rugby,” said Gareth. “I mean it can be done but we’d be pushing it.”

At that moment Fredrick, wriggling around in his pushchair, kicked out his foot and toppled over a velvet-topped piano stool.

“I’d be happy to take one these two off your hands as part payment,” said Mr. Wright, gesturing towards the pram.

Sophie gave Gareth a ponderous look, as if conferring non-verbally over a possible pub quiz answer. “It is a darling little set,” she said.

“Which one?” said Gareth to Mr. Wright.

“Oh I don’t mind. Are you particularly attached to either?”

“We’ve only just got Fredrick’s name down for Harrow,” offered Sophie.

“Yes, I did have to call in a fair few favors from the old boys’ network on that.”

“Also, William’s teacher said he’s not exactly excelling. Verity was already reading at a seven-year-old’s level by his age. If he’s not an academic then this type of work might suit him quite well. No offence intended,” Sophie quickly added, turning back towards Mr. Wright.

Mr. Wright made a supplicating gesture; “None taken I assure you.”

“I mean it’s completely up to you how you’d…” Sophie paused for the briefest of seconds, “use him, of course.”

“I wouldn’t know quite yet. So it’s this one is it? William?”

“No that’s Freddy, this one’s William,” said Gareth, hoisting his son out of his pram and setting him down on his feet. William looked bemused for a moment, then grinned inexplicably and clapped his tiny hands together.

Mr. Wright assessed him. “He looks in good enough order. So that should cover half the cost.”

“Just half?” said Gareth perturbed, allowing a little annoyance to creep into his voice now.

“Mr. Farthingwood, it really is an incredibly rare piece, and you did just say that Freddy…”

“…that William is a little slow, relatively speaking.”

Sophie did not seem to want to meet Gareth’s eye.

“Well I’m afraid we’ll have to pass. Maybe we’ll come back another day, when we’ve got some cash on us and a little more time?” Gareth said.

Sophie gave the merest of nods.

“That’s fine,” said Mr. Wright, “although I should tell you that I do have a couple of local dealers who’ve expressed an interest.”

“Still though,” said Gareth, strapping William back into the pram. “Come along then Verity.”

Mr. Wright held the door for the family as they made their way out of the shop.

Suddenly Sophie stopped in her tracks, as abruptly as she had when she’d first sighted the tea set.

“Christ, I’d completely forgotten about her,” said Gareth, smiling broadly at his foolishness.

“We have another daughter Mr. Wright,” said Sophie, barely able to contain her excitement. “She’s away at school at the moment, at Cheltenham Ladies, very capable, excellent lacrosse player.”

“She got ninety-five percent on her Shakespeare GCSE paper,” added Gareth.

“Sixteen years-old; very mature for her age. Middling at maths and a lovely baseline game her tennis coach says,” said Sophie, “She understands nearly every Guardian op ed, even some of the Will Selfones.”

“When are we getting my ski jacket?” asked Verity, standing on the threshold with her hands on her hips.

Her words seemed to have a persuasive power over Mr. Wright. He clapped his hands. “Okay! William and the girl and we have a deal!”

“Great!” exclaimed Sophie.  She approached the tea set with the joyous look of a devoted owner reunited with a long lost pet.

In the office at the back of the shop they hashed out the legal details. Sophie would telephone the school and inform them that Mr. Wright would be collecting Madeline at his convenience. She and Gareth would continue to pay the school fees for the rest of that academic year or until Mr. Wright was in possession of the child. William was once again removed from the push chair. The parents made their farewells to their son, shook hands with Mr. Wright, and exited the shop.

“Nothing like some good old fashioned bartering,” said Gareth.

“Oh look, there’s a cashpoint, on the corner there,” said Sophie, the boxed-up tea set under her arm.

“Which way is Snow and Rock again?” said Gareth.

John Miskelly is twenty-nine years old and lives in Bristol, England, in a room with a large window but no laundry basket and intermittent heating. Most recently he has been experimenting with chard. He writes irregularly at www.protagonistcomplex.blogspot.com.

A collection of his short stories can be found on this website.