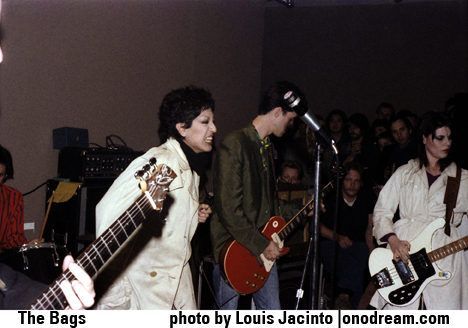 After the demise of The Masque and before the rise of Madame Wong’s and the Hong Kong Cafe in Chinatown, and much later, the Whiskey A GoGo, there were not too many places for punk bands to play. The ASCO art collective—Gronk, Patssi Valdez, Willie Herron III, and Harry Gamboa, Jr.—began to include punk bands to play at their art openings. Appearing at other ASCO art shows, besides The Bags, included The Snappers, The Last, and Los Illegals, among others. Jerry Dreva was quoted as saying about this particular show, featuring a nineteen-year-old Alice Bag, "The Art was stolen, the place completely trashed... A complete success!" http://www.onodream.com/