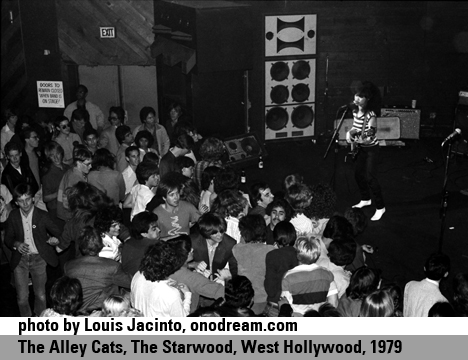 All of the punk bands in 1970s Los Angeles had an energy that could not be contained!  But the bands that had girls in them – The Alley Cats, The Bags, The Go-Go’s (when they were still punk), X, and Nervous Gender (when Phranc was in the band) had a real energy that swept and electrified throughout the crowd. If you look at the crowd in this photo, taken in 1979 at the Starwood in West Hollywood, The Alley Cats’ bass player, Diane Chai, has already begun to get the crowd to begin a swirl that will soon engulf everyone on the floor into a vortex of pogo-ing!