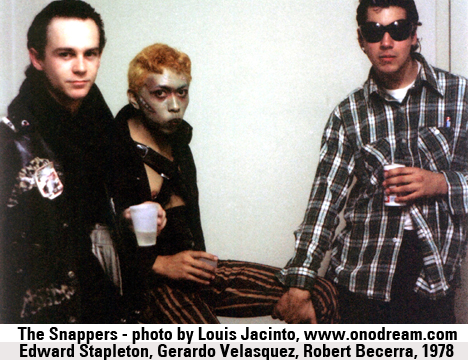 In 1978, Gerardo Velasquez and Michael Ochoa formed The Snappers along with guitarist Robert Becerra (later of the notorious East Los Angeles punk band The Stains) and drummer Jessie. They were booked to play at GRONKPATSSIPARTY, an art opening hosted by two members of the East L.A. art collective Asco, Patssi Valdez and Gronk.

The host, Gronk, did not suspect The Snappers had encountered such difficulties since the previous band had made similar noises during their set.

This was the band’s second and last show. But that evening, Gerardo and Michael met Edward Stapleton. The three of them decided, that night, to form Nervous Gender and begun their journey to become—as described by the Los Angeles Times—“the thorn in the side of the L.A. Music Scene.”