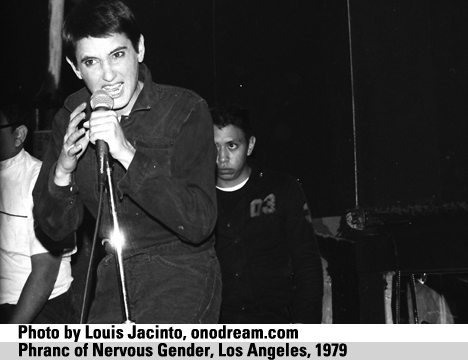 Our generation grew up listening to everything, because everything was played on the same radio station. So when punk rock music emerged in Los Angeles, it knew no boundaries of any kind. Punk was everyone: lesbian, gay, straight, Black, Jewish, Latino, Asian, White, girls, boys. This was never a conscious decision on anyone’s part. If the scene had been segregated—as it happened to become in the 1980s with the second wave of skinhead boy bands—it would have been foreign to us. One of the most influential bands of the era, Nervous Gender, even eliminated guitars from its sound. And the members—Latino, lesbian, gay, straight, boys, and a girl—looked just like the crowds that came to their shows. Every band looked like the crowds who came to their shows.