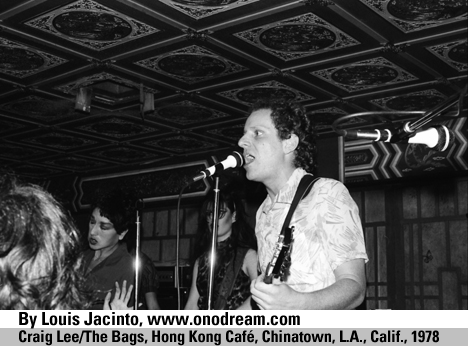 For most bands, unless you were the Beatles, the focus tends to be on the lead singer. While the incomparable Alice Bag fronted one of the most influential bands that emerged from the initial punk scene in Los Angeles, 1977-1980, she would be the first to say that all of the band members were equally important in creating that influential sound. Playing guitar and providing backing vocals, Craig Lee also was the writer of The Bags seminal recordings—“Babylonian Gorgon” and “We Don’t Need the English,” among others.

During this time period, I saw these incredible acts as “stars.” I was just a kid with a camera, so I never crossed that line to intrude into their personal space. I believe keeping that distance allowed me to capture so many beautiful images of The Bags during their performances. The only time I spoke to any of The Bags was with Craig Lee. I asked him if the band was going to be making anymore records. He said they had been approached by a record producer, but the producer wanted to make the band sound “disco-ish.” The band declined the offer. Thank god for saying no to that.