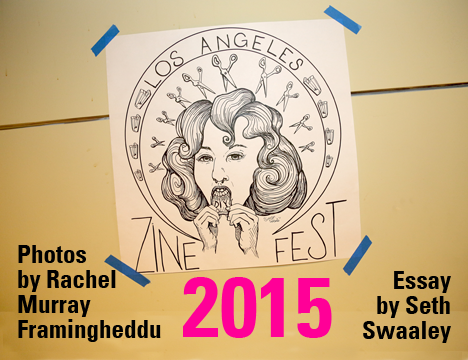 If Los Angeles Zine Fest is any indication of where the world of art and literature is heading, I think we’re in pretty good shape.

This was my first time at LAZF, so besides what I’d heard from other people about previous years, I wasn’t quite sure what to expect. I arrived around one and parked a couple blocks down from Homenetmen Hall at the Goodwill, which was already near full capacity. I figured that—along with the steady stream of people walking down the sidewalk—was a good sign as far as attendance goes.

Inside the hall, large, diverse crowds filed down the isles and huddled around the various booths purchasing zines and talking with the artists and writers. I tend to get sensory overload at these types of events, but I tried to make an effort to check out as many booths as I could. A few minutes after being in the place, I talked with a Latino artist from San Francisco and a comic book writer. Shortly afterwards I picked up a simple, well-written gardening zine geared towards beginners. I recently moved into a place with a yard that is in need of much love, so I thought this might help get me in the right direction. Plus it was only three bucks.

I then took a seat towards the main entrance to check out the “Old School, New School” zine panel. Among the many topics covered were feminism, animal rights, and visits to coroners. Not only was it engaging and humorous, but it gave everyone an honest, behind-the-scenes glimpse into the different approaches that go into the zine-making process.

After that, I wandered around and discovered that there was a basketball gym with another hundred booths. I found myself intrigued by John Marr’s zine Murder Can Be Fun, which is about bizarre deaths and murders. I’m not sure if it’s my distaste for all things Disney, but the issue about all of the deaths that have occurred at Disneyland spoke to me on a very morbid level, so I bought it. I walked past a hands-on zine workshop with some young kids and then picked up a couple of copies of Genetic Disorder before I left.

I left L.A. Zine Fest not only impressed, but inspired. I think the simple beauty of zines is that they’re tangible—something we can hold, make—and, more importantly, they provide a strong alternative outlet to the mainstream magazines. They allow voices to be heard that otherwise wouldn’t be.

The great part about it is that there’s a large audience that’s listening.