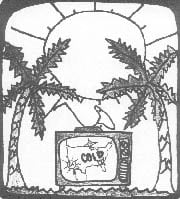 Like the Devil Needs Matches, Part II: The Founding Father of T.V., Homemade Holidays, and the New Hostile Front in Roc

Back in LA. Sunshine and green trees - January through February. Steve Earl said that you can forget how long you've been in LA because there is not much of a noticeable change in the weather. I would have to agree.

Now, if you will, please allow for me to graze the surface of a month and a little more than a half - spice it up with whatever I got in the kitchen, and lay it out on the table for you?

My neighbor, Dickie, said that in Indiana, which is where he hails from, that right after Christmas people say they get what are called the Januaries. I equated it to what has been called seasonal depression. After-Christmas-brokeness. The Januaries - sounds like the title for some realer-than-real sitcom. This is LA. I'm sure it could happen. But pray to what you will that it doesn't.

From what I understand, the Januaries are brought on by months of heavy rain, cold, snow, ice, sludge and the like. But we're in Southern California. The months of cold and rain just don't seem to come.

Dickie was over at my apartment explaining this to me as I was gathering my clothes to wash - there was a knock at the door. "Come on in," I said. The door opened and there stood Ron. In his left hand he held what looked like a large newspaper clipping in the other hand a bottle of burgundy.

"Philo Taylor Farnsworth!" he exclaimed standing in the doorway. "You ever heard that name before?"

"They're dirty right now. I'll get to washing them after I put these clothes in," I said.

"I'll get it? take a look at this," Ron said, throwing the clipping at me to read as he made his way into the kitchen to wash some glasses.

"Don't be scared to go to town on the rest of them dirty ones," I said.

The story was by Cecilia Rasmussen and had been clipped from the LA Times. Farnsworth, it explained, was the inventor of the television (http://inventors.about.com/library/inventors/blfarnsworth.htm). He conceived the idea at the ripe age of fifteen. Ron said that the reason he was able to invent the thing so young was because he didn't spend all of his time watching cartoons. It was a nice irony, he thought.

I'd never given much thought to who might have came across this modern wonder. I imagine I have always been content with the idea that a Mr. or Ms. Zenith invented it. Maybe cousin Sony. The truth is that I never gave it a second of thought. That made me wonder what else I have neglected to inquire about. There's no telling. I read the clipping then finished gathering my clothes for the wash.

It came to my attention later in the week, while I was on the computer looking at websites dedicated to Farnsworth, that the story I read in the clipping was the same story I was reading on the web. Something strange about that? Maybe. What's even more strange is that here I am writing about a story that seems to be written after another story. So folks, I suspect you're privy to a 3rd generation, latest adaptation, on the story of the late great Philo Taylor Farnsworth.

Now let's get back to the dishwashing.

Ron had managed to find two glasses which he cleaned and poured out some of his wine into. Him and Dickie settled into a couple of lawn chairs outside the front door.

"Naw, I need to clean up around here. I've let things get out of hand in the past couple of months and my place looks and smells like shit."

I said "Ya'll got my only two glasses right now?. shut the fuck up and let me clean my shit up!"

"Oh well, by all means go right ahead?. Clean yourself up," said Ron.

Maybe I'd been too harsh. I didn't care.

I grabbed my clothes and started to walk down to the laundry mat. As I walked away, Dickie said, "You just got the Januaries? I'll have you a glass waitn' when you get back."

The Januaries rolled on. Seasonal depression without a change in seasons. The result of an environmental hangover.

The initial interest in Farnsworth waned. I wondered if it had anything to do with the fact that none of us had a TV. Would we care more about an inventor if we interacted with the invention? It stood to reason that, yes we would, but none of us had TV.

Neither Ron nor Dickie had worked in months so they weren't about to buy one. I didn't want one because then my house would become the community theater. And I did not want those dick wipes up in my house every day.

So anyway, January drug on. I decided that I was going to kick drinking for good. I don't smoke grass and aside from my recent mild fling with hydrocodone, I haven't been residing in the world of drugs. Fuck it! I'm going on a program, I said.

"Fuck you, you pussy, have a beer!" was the reply. 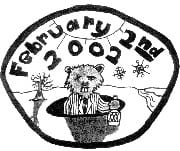 I stammered and then stood still. Nope. I wasn't going to drink until the first Saturday in February, which this year would be the 2nd. The first Saturday in February has for the past some-odd-years been referred to, by people willing to do so, as National Drinking Day. A holiday for alcohol! The cornerstone. As far as all other holidays are concerned, alcohol comes second. Your birthday, drinking comes second. Thanksgiving, drinking comes second. Christmas, even though some have argued against this, drinking is a result of the holiday. It's the same for Easter, Mardi Gras, St. Patrick's day, the Forth of July, and Groundhogs Day when Punxsutawney Phil climbs out of his hole and everyone gathers to see if the little critter sees his shadow. This year, Groundhog's Day happened to fall on the first Saturday in February.

But this would all take place in Aquarius. What this meant I wasn't sure. Would there be treachery? Would there be deceit? Would there be life in the makings deserving of a soap opera? I didn't know. I bolted my door against the yapping of the hyenas, closed my ears to the gurgling of the pipes, and made sure I had plenty of dry goods and bottled water.

Days are filled with mayhem when everyday is spent drinking. At least that's my understanding. Sometimes you can't remember if you got drunk or if you were just dreaming. I ain't ever had this explained to me before. Maybe I just wasn't listen'. Who knows? I sat down with Ron to talk about it.

He seemed to think that it was residue left over from some crazy women I'd said I ran with in the past. This dream-reality-drunk-thing. He might be right. Regardless, I was off The Program in less than three days and had begun cross training for the dual holiday of Groundhogs Day and National Drinking Day.

The weekend of the 2nd was afoot, actually it was Friday the 1st. Ron was going to see the Fireballs of Freedom and the Detroit Cobras across town. "Sure, I'd like to go," I said, but instead I ended up going out of town on a mission to Northern California. Ron would come back with a report on the show.

Now, what he played back to me from his freeze-frame memory didn't have much, if anything, to do with the show. Mostly what happened was drinking. As the story was told to me, Ron got drunk on an empty stomach, so all that he'd been drinking hit him long and hard. He was strolln', stumbln', staggern', swaggern', swayn', around the bar room. He remembered seeing a band playing with colored oil lights shinning on the stage. The Lords from Altamont, I think they're called. "I didn't even read anywhere that this band was playing," he said. He didn't like it. "The Lords looked like some type of crap that needed something other than genuine entertainment skills to keep the crowd's attention," was his prognosis.

Here's the kicker. Ron is not a big guy. He's not ever been a threat to anyone's safety, as far as I know, and in all manner of retellings I've heard, who the hell knows what happened. Ron sure as hell didn't. Gathering what I can, Ron was outside and told some guy in the Altamonts that he looked like Chris Robinson from the Black Crowes (http://www.blackcrowes.com/). I can imagine that Ron told him he looked like a rip off. Hey, it's a free country. 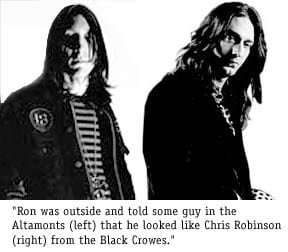 Well, Ron said some drunk shit. The next thing he knows is that he's in the parking lot beside the club and he's getting up off the ground.

Ron was thinking, what the fuck? I just got punched by Chris Robinson but I love the Black Crowes, man! "Hey Chris, come back. I even bought Three Snakes and One Charm!" But, this was not Chris Robinson. Later, Ron reasoned that maybe Chris Robinson is acquiring a following like Elvis. There's the Blind Elvis, Black Elvis, Old Elvis, New Elvis, Midget Elvis, on and on. Maybe this guy was the first Chris Robinson impersonator! Ron, you idiot! You pissed off a pioneer! The Keyboarding, Organ grinding, Chris Robinson! How could you be so stupid? Get your shit together man!

Ron said he turned to follow after the pioneer and found Chris Robinson of the Lords of Altamont outside putting a guitar in its case. "Hey Chris," Ron said. To which Chris Lord harnessed his wit and replied, "Your mother."

"You got drunk, rowdy, and blacked out," I said. "It was easy for you to get your assed kicked, but you don't look bad at all. I've seen a sidewalk do more damage than he did."

"Yeah but yeah. There's nothing to do now. You might as well invite them over for cupcakes and milk," I said.

With that said, I'll go ahead and embalm this story. On February 2nd the world got ready to learn how Ron blacked out and was smacked around by some dark and drunkenly mysterious band of Lords. As for National Drinking Day and Groundhogs Day, it all came to pass according to plan, with the small problem that Punxsutawney Phil saw his shadow. That means six more weeks of winter, which by the time you are reading this, will be almost over. I think a grand total of seven people in three states celebrated National Drinking Day. That's two states and two more people than last year!

So long for now from the land of milk and honey.