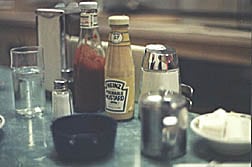 Like Burned Out Bulbs on a Ferris Wheel: Jessica Disobedience's Debut Column

I'm obsessed with collecting and telling stories. It's what I do - it's why I do a zine, why I write fiction, why I write songs. I think people have a tendency to let other people's stories speak for them. Rather than writing down their own stories, they read zines or listen to records and say, "I don't need to write my stories down because these people did it for me." But you can't depend on other people to tell your stories for you. No matter how closely you relate to someone else's words, no one can ever tell your story for you. And so I tell my stories and those of my friends over and over, whether anyone wants to hear them or not.

I've been thinking a lot lately about the idea of punk being a threat. I used to spike my hair and walk around singing "Fuk Shit Up" by Blatz and feel kind of ridiculous - feel like I had missed the time when punk had really been a challenge to the status quo.

Someone pointed out to me that real punk had always been a threat, if for no other reason than the ability to think outside the boxes, and that just because there were some plastic pre-packaged "punk" bands that the mainstream had embraced didn't mean that the threat wasn't still there.

My friend Mike told me this great story once, about being a screwed-up teenage punk. (This would have been in the late '80s.) He was getting on the school bus, eager to get home so he could skate or have the almighty first cigarette of the day. He was wearing what he wore pretty much every day: his Misfits t-shirt and a pair of green plaid pants. This cheerleader bitch (with her stupid teased-up mall girl hair and Esprit bag full of hairspray and perfume and everything else she needed to look good to the jocks) came up to him and said, "Why do you dress so stupid?"

He didn't say anything. He just pulled a mirror out of her bag and smashed it on the floor of the bus. Then he picked up the biggest of the glittering shards and sliced his hand all the way across from one end to the other. As blood gushed everywhere, the cheerleader's face crumpled and she started to cry. He had to wrap his hand up in his favorite t-shirt to stop the bleeding. He was later forced to go see the school counselor twice a week, but that cheerleader and the other popular kids never bothered him again.

See, that's a threat. That's saying, "Fuck you. I'm doing something that's ugly to you, but I don't even care."

Yeah, I think that punk's still a threat - especially after 9/11. In the new ultra-patriotic, super-consumer America, I've found myself getting more suspicious looks and outright shitty treatment than ever before.

A new Starbucks Coffee opened up in my neighborhood not that long ago. The other day I took a Sharpie and wrote near the door: "Fuck this place. The coffee is shitty and overpriced and the atmosphere is sterile. Go somewhere with some soul." I hoped that this would inspire the customers to go to a shitty diner full of characters straight out of a Tom Waits song or a coffee shop filled with old poets, punks, and queers.

My favorite coffee shop in the world has been closed for a little over a year now. It was tiny and dirty, but the coffee was cheap and strong, everyone was friendly, and god damn it - it had a fucking soul. The bathroom was filled with graffiti: ska!, I Love Jesus, Free Mumia. Kids came in to pull empty whipped cream cans out of the trash and do whip-its. People critiqued each other's writing. The people who worked there would make me toast for free when I was hungry and broke.

One time, a Nazi skinhead and his girlfriend came in, and we played anti-Nazi songs on the stereo and gave them dirty looks until they left. Another time, my friend Shawn who worked there was sick of all the yuppies who would come in and ask him all sorts of questions about items on the menu and then not get anything. So we hung a sign on the door: "No Yuppies Allowed."

Every night there was a story.

Every day, no matter where you are, is a story.

This column was written under the influence of Against Me!, Service Anxiety, Daycare Swindlers, the Sick Lipstick, Bitchin', The GC5, Dillinger Four, and Tom Waits.