Like Burned Out Bulbs on a Ferris Wheel: Blankets, The Blankets That Cover Me!, a Column by

Ballistic Biscuit was the second punk band I got into, Green Day was the first. I went from a hella popular band to one that still no one has ever heard of. You can hardly get more obscure than Ballistic Biscuit.

There's a place called Door County, Wisconsin.* (It's on a peninsula and it's about an hour away from Green Bay.) The biggest town in Door County is Sturgeon Bay, which has a population of around 9,000. The rest of the towns (on both the Green Bay side and the Lake Michigan side) have any number from around one hundred people to nine hundred people as the year-round population. The population increases greatly during the summer months, when tourists from Chicago and southern Wisconsin and a whole bunch of other surrounding states take over also, college kids come from various places to work there during the summer.

My parents started dragging me up there in 1995, and in 1996 my best friend Ali came with us. We were reading a local newspaper that highlighted local musicians - most of the music in Door County is old folk dudes and I'm not talking the good kind of folk music, I'm talking about boring kinda pop-folk shit. So imagine our surprise when we saw an interview with a dude calling himself "Patch McPanic." He was the lead singer for a Door County punk band called Ballistic Biscuit. Patch talked about their CD and his favorite bands (Operation Ivy and Bad Religion), and then at the end of the interview he smashed a bunch of chairs or something equally "punk rock." Ali and I were intrigued. We went to the one and only music store on the whole fuckin' peninsula and got Ballistic Biscuit's first album, All Men Are Free. 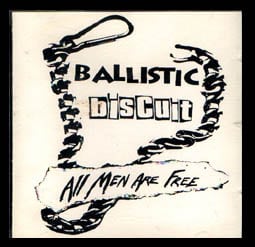 All Men Are Free has seventeen songs and some of the shittiest recording quality ever. It was released on their own record label, Rotten Logger Records. Growly bratty punk rock vocals and out-of-tune guitars. Some of the songs - "Blankets," "I Hate America," "I Care" were typically angsty and angry. There were also songs about killing gophers and getting erections, strict fathers, overdosing on toluene, and fucking girls in bathrooms, and a ten-second song that consisted of a drum intro and someone screaming: "I'm a wuss kill me!" "They Don't Know Me" was my favorite song on the CD. It was a "proud to be alienated" anthem and it included The Oi! Choir, a couple kids with an organ, a trumpet, and a trombone. All in all, the album sounded crappy and was angry and fun and likely to piss off a lot of PC punks. Hell, I was even offended by some of it, but I loved it anyway.

Ali and I became obsessed with Ballistic Biscuit that summer and we spent the lazy, boring days trying to find them - at the coffee shop, on back country roads, at the grocery store. Everywhere we went, we looked around hoping to see spikes and chains and mohawks. It wouldn't have been too hard to spot punks in Door County, and we were quite sure that if we saw any punks, it would be Ballistic Biscuit. We never saw any, though, no matter how much we searched. We even had my parents drive us out to Rotten Logger Records and we videotaped ourselves in front of the mailbox. (Yeah, we were huge dorks, fuck you.) The day before we left Door County we called Jeremy Ballistic (the drummer) cos his phone number had been in the article. No one answered the phone so we left a message, giggling hysterically like the teenage girls we were: "Hey Jeremy, your band has groupies - you guys rule!" I'm sure the guys in Ballistic Biscuits are still scratching their heads about that one - "We had groupies? I never saw them!"

We left Door County and were only mildly obsessed with Ballistic Biscuit. I played the CD for all my other friends. In February of '97, my friend Monica and I decided we were going to interview Ballistic Biscuit for our zine Disfunction. I dug out the interview and she dialed Jeremy's phone number because I was too nervous to do it. At the last second I said, "Wait! I gotta do it - they're my band!" and I grabbed the phone away from her.

The answering machine picked up and I left a message about wanting more information on the band and getting t-shirts or something. I forgot to leave my name. A couple of days later the phone rang. I answered it and I heard a guy's voice on the other end of the line saying, "Uh. . .someone called about Ballistic Biscuit?"

Jeremy and I talked for a little while. He told me they were making a new album - a split with another band - but that it would be on tape cos they couldn't afford to put out a CD. When I gave him my address, he was shocked that someone outside of Door County had heard of them. ("We'll keep in touch," he said, but we never did.) That night I was hanging out with some kids, sneaking out of our youth group to huddle in the freezing cold and smoke cigarettes, and I was giddy - "I talked to Jeremy Ballistic!" "Who?" they all asked. It didn't matter that they had never heard of him; he was a rock star to me. About a week later I got a Ballistic Biscuit patch in the mail and I've still got it sewn on my blue hoodie.

The next summer in Door County, sure enough Ali and I found Ballistic Biscuit's new album, Teen Profit Songs. The tape itself is bright green and it's a split with a band called Fellini 45. The Ballistic Biscuit side had the same snotty Johnny-Rotten-spittin' vocals but the recording quality is much better and I think there's even - oh the fuckin' horror! - a guitar solo. There's some more alienated white boy songs, a song about diarrhea, and even a hidden track in the middle of the tape that makes fun of hippies and talks shit about Jerry Garcia. You can't go wrong with that.

Ali and I never found the boys from the band that year, either. I've continued to listen to them (mostly nostalgically, but sometimes I'll still put them on mix tapes for people), and I found out that the band got its name from a silly Christian-oriented video game about some skiing camp counselor. I never thought I'd talk to any of the band members, but a few months ago an e-mail appeared in my e-mail box. "Thank you, fellow punk," said the subject. I opened it up:

Its nice to see that people remember us for the short time we existed. Its also nice to see us mentioned anywhere on the WWW.