So everyone knew that Lifetime was going to be playing a huge festival at Giants Stadium. It was one of those things that everyone inevitably complains about when any band goes and does things. However, not as many people knew that they’d also be playing a smaller show the day before, at a venue just slightly more intimate than an arena parking lot. How I knew about it, I’m not even that sure myself, but it was certainly worth dragging myself up out of bed early on a Saturday morning (not for cartoons, for once) to catch a train down.

The Unlovables went on first, and I was pretty bummed that I missed the first few songs of their set, since it was so crowded and slow to get downstairs to the show space. Fortunately, I still managed to catch most of the set, so I was happy about that. They’re a great pop punk band, “traditional” without being completely derivative like a lot of other bands, and “modern” without sounding like the kind of garbage that filled up the festival that Lifetime was playing the next day. Does all of that make sense? I hope so, because The Unlovables are pretty awesome, and I would like to get that point across.

There was another opening band called The Death Set. This was interesting. It’s pretty hard to even try to describe them. Okay, you know those big arcade dancing games? Okay, you know how they have games like that, but instead of dancing, you play these novelty guitars? That’s what they were like. That, with gangsta rap beats. I’m dead serious. 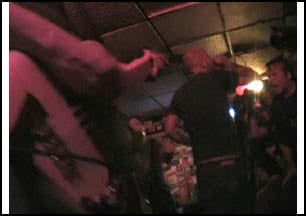 If nothing, Lifetime is a weird band. Well, at least not musically. Musically, they’re a hardcore band, who instead opts for a more positive, poppy take as opposed to the rest of their bone-headed contemporaries from the early ‘90s (or, for the sake of argument, also the “I hate everything” metal-core bands of today). The weird part has been the wide scale of reactions they’ve had over the years. They made it from “Eh, this band sucks,” all the way to, “This is one of the greatest bands, ever,” shortly before ending things in the late ‘90s. Still a popular topic of conversation even after having broken up (the fact that members went on to form Kid Dynamite, Zero Zero, Paint It Black, and others probably didn’t hurt this), the general consensus seemed to be “Well, sure it would be great to see them again, but it would have to be something like a basement show, or it would suck—and there’s no way that’ll ever happen.” Sure enough, there were constant bumps and nudges urging them to reunite, to the point where it seemed like every new band on the radio or MTV was saying, “You know who we owe our being in a band to? Lifetime.” Finally, after a mess of an incident known as Hellfest, the band finally decided to permanently regroup and go back into the crazy world we all know as punk rock the best they could.

Anyway, after a short wait, Lifetime finally got ready to play, and ended up playing a pretty good chunk of their discography for close to an hour. It’s always a pretty cool feeling seeing a celebrated band, in essentially a hometown setting, let alone in a tiny, packed bar basement (furthermore, seeing them in a tiny, packed bar basement the day before they’d be playing on the main stage at a huge festival, probably fifteen feet away from the crowd). Things began with some very atmospheric feedback and started with “Turnpike Gates.” There were some technical issues at times, like some faulty guitar cables, but no one really seemed to mind. In fact, I was actually really surprised at how calm the crowd was overall. Granted, people were jumping up and down, singing along as loud as they could, but only one person fell on top of me (not that I’m complaining). All in all, it was a great show, combined with having time to eat the horrendously delicious food New Brunswick has to offer (spend a day there, you’ll know what I mean), made it one of those shows that leaves you thinking, “I’m glad I got into this crazy stuff.”