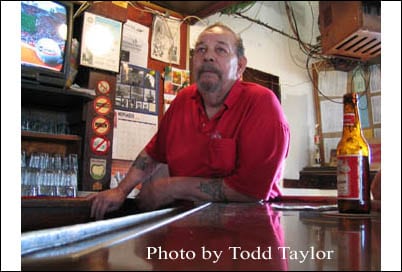 The smoke cleared and George's eyes focused on what laid in front of him: four empty bottles of Budweiser and four empty shot glasses (bourbon, he thought, was the likely residue at the bottom of each glass). He had no idea how long he had been sitting on his favorite stool in his favorite bar, favorite only because he lived upstairs from it. The employees and patrons and jukebox selection and shuffleboard table were all secondary to him.

On the inside and out, Len's Place looked like almost every other bar in George's neighborhood. It was only the size of one storefront. There wasn't room for a pool table; only shuffleboard pushed against one wall. The bar itself only ran half the length of room. There were two tables placed at the end of the bar that, as long as George could remember, were only occupied during happy hour. To his recollection, George had spent every day of the past ten years in that bar, perched on that stool. He saw and ignored hundreds of so-called "regulars" come and go over time. He never played a song on the jukebox, never played a game of shuffleboard, and rarely spoke a word to the bartenders. He would occasionally glance at the television set perched high behind the bar, checking on baseball scores that he no longer cared about.

He knew that he had made his way into the bar before the air was filled with the aroma of the franks and beans that were slopped out to the happy hour crowd and he knew the same aroma had wafted away by now. Nine o'clock, he thought. Must be near nine. Must've been here at least five hours. He had once read that the three keys to surviving if stranded on a deserted island are nutrition (water and food), shelter and time. You must keep track of time for, once you lose it, it is only a matter of that which you have lost track of before insanity takes its toll.

The female bartender shook his mind out of the smoke. She was holding a credit card receipt and a pen. "You know that Len doesn't want me leaving your tab open when my shift ends."

George could never remember the names of the women who worked the afternoon shifts. A few years ago Len, the owner, started hiring young girls to work the afternoons to boost his business. Pointless, George thought. If a man needs a drink he will buy it from anyone. A man doesn't need a young girl, who is more concerned with how much of her tits are showing through the neck of her shirt than how well she makes a drink, to serve his booze. But, what did he know?

George couldn't comprehend what she was saying but knew that a pen and a slip of paper meant he needed to sign. His shaking hands grabbed the pen and he carefully scratched "George Wright" across the bottom. The charge on the receipt read $36.00. Knowing that he was never charged for at least half of his drinks, he knew he'd been sitting there for quite a while.

"Evening, George." Len's booming voice came over him from behind. "Carmen make sure you're all paid up?"

Carmen. Of course, George thought. How could he forget? Named after his favorite piece of music - Bizet's masterpiece opera. Or so he assumed. George's drunken thoughts began to wander as the sadly seductive melody of the "Habanera" drifted through his mind.
"You all paid up?"

Len never let any of the female bartenders work past ten o'clock. He was always the man behind the bar from ten until two. Seven days a week. He was tall and handsome. Rugged like the protagonist in a Hemingway story. Always tucking his tight, black t-shirts under the snakeskin belt that wrapped around his faded jeans.

He bought the building almost twenty years ago. George had already been living there for five years. Len remodeled the closed down cafe, which the previous owner had given up trying to run over two years before selling the building, and turned it into a bar. Len wasn't only the owner of George's favorite bar, he was his landlord. And, since the onset of George's retirement some ten years ago, Len was George's only friend. He was 63 to George's 72 but you would think he was twenty years younger. He owned the bar while George just wasted his life there.

"Be good to my boyfriend," Carmen joked with Len, "he promised to buy me a drink." Carmen sat in the stool next to George and put her hand lightly on his thigh and said, "Buy me a drink?"

George just shrugged his shoulders in acceptance. Buy you a drink? he thought. Don't you work here? How much money have I spent, in all my years, buying drinks for waitresses and bartenders who could easily pour their own for free?

"Make it two." George's throat was hoarse while he eked out his first words in hours.

So that's how it is, George thought. Give the lady the Jack while the old man that's paying for the drinks gets the Kentucky Gentleman. Thanks, friend.