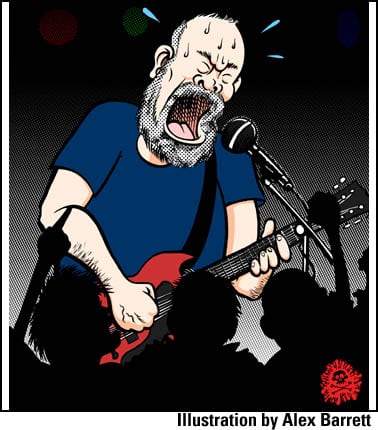 LEATHERFACE:Viva La Arthouse: CD
“At a time when everything was evergreen, evergreen and seemingly ideal/the nights turning into the days and we didn’t notice the change... and not a day goes by, that I don’t spare you a thought/not a day goes by...” I strongly remember Frankie Stubbs repeatedly belting out that last line the first time I saw them. Seeing this song performed live locked me in for twelve or so years of listening to Leatherface. It’s a reflection on lost love, thick with feeling, yet spare and somehow lacking sentimentality. I had no clue who Leatherface was before that show, but I knew I was seeing something special. And “Not a Day” remains my favorite song. There’s much to be said about Frankie Stubbs’ often-imitated throat-shredding vocals over the fast, thick walls of the band’s heavy melody. As well, as Stubbs’ odd, ever-recognizable, indescribable, guitar sound, the way the riffs drop in over the thundering force of the songs. If you’re listening to these songs alone, they take you further inside yourself, introspective, yet relieving. If you’re listening to these same songs at a show, the crowd turns into a united force singing along, with arms around strangers as if you knew them your whole life. There’s a reason for this. It’s because Leatherface has tapped into something so intrinsic to struggle and life that the songs work like a medicine over weary and battered souls. Their songs don’t offer hope, not as a band-aid, nor in the almost fundamentalist catchphrase way that you’ll hear the word today. They don’t offer hope at all. They are hope. A constantly relevant hope, because they continue to write songs that hit you where you are. “I lived here last summer we could smell the drains/While we watched the stinking flies eat what they could find/Well it was all so nice a peasant in paradise/And we will remember this we got burned and never realized,” go the lyrics to “Peasant in Paradise.” When I hear this, I think of an angry man living in some slum, lashing out about the state of his existence. Later on the album is Stubbs belting out “We don’t make bargains and don’t deal with markets/and I want the moon.” It’s a steadfast, unfaltering statement of individuality and earnestness that makes any youth crew or oi song seem temporal and insulting. Leatherface is not glassy-eyed positivity, nor are they nihilistic. They are always sharply and often sadly, realistic. They’re irritable and pissy, but also warm and embracing. Their songs don’t tell you it how it is; they are with you about how it is. Hope is just a feeling and one that passes—like happiness or love—replaced with a season of despair and self-doubt, or as they put it “days and days of sour grapes.” Leatherface’s songs aren’t marches or anthems, nor do they wallow in the mire. It is the pure piss and bile of what it is to live in these times, or in any time. But they have just as much a deep appreciation for small pleasures and fleeting love. Leatherface will always be relevant because they cut through the bullshit to the very core of resistance. They cover every part of life and give us, if not the hope, the strength to hunker down for a long, dirty struggle. –Craven Rock (No Idea)