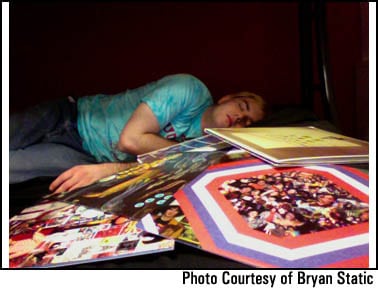 Punk rock is hard. (I’ll wait over here until the “that’s what she said” jokes simmer dyour own.) I exert more energy in my search for new music any given month than my search for edible food. It takes time and effort and, usually, I don’t even want to give that much to my trip upstairs to my bed. So, why do I do what I do?

A while back, there was going to be a show hitting San Antonio. It had a few out-of-town bands and some local favorites. I wasn’t going to attend because it was Wednesday and in a part of town I had never really been to. The day before the show was about to happen, I found out that one of the best bands around today, Audacity, had been added to the show at the last second.
If you have not checked out Audacity, do so now. I will wait.

If I chose to attend the show, I had a curfew of about midnight thirty. I computed the odds, checked my math, again and again. There was a very good chance I wouldn’t get to see the band play their set even if I did go down. It was a pretty easy decision to make. “Fuck the odds,” I said as I entered my horseless carriage and rode off into the sunset.

This was the week of SXSW up in Austin (about an hour away from here), and we got an ass-ton of spillover bands looking for shows, so the normal venues were filled with other bands of various other subcultures. We were displaced to a small family-owned restaurant in the old part of town (read: streets that are confusing as hell). Just like always, I got too excited and showed up way too early. I was there before any of the bands were. I sat around, waited, and watched the occasional drunkard stumble out of the liquor store a block away.

The show got off to a rocky start; the venue itself didn’t have a PA, so some of the locals had to drive a good half-hour away to get one. It was a good hour past the starting line before the festivities started rolling. I was getting nervous, and a little pissed, but that’s the way things go sometimes.

The opening bands started to warm up their instruments. While the fuzz and distorted noise filled the small bar area, a clearly drunk middle-aged woman, dressed in a bright neon lime dress began dancing to the static of the amplifiers. She was either a big fan of the restaurant or friends to the owners of the establishment, because I’m not even sure she was aware that there was a live band in the room. When the bands started playing, she continued dancing in moves obviously meant for more Latin-oriented numbers.

Eventually, Audacity showed up looking a little confused and disoriented. I was the only one who recognized them. I pointed them to the people who they were looking for and went off on my own to find out when they were supposed to go up. Then things got messy.

After the second local group played, all the other bands apparently decided it was their turn to play. It was complicated. I partook in some of the conversations in which we tried to clean up the set times in a selfish move to have Audacity play before my ever-nearing Cinderella deadline. Needless to say, I failed. Miserably. I’m not sure when they ended up going on, but it was very much not before the AM hours.

Hold on, folks. There’s still a very Disney ending to all of this.

Defeated, I retreated outside the venue and sat by my car debating whether to stay for the next band or two before I had to leave. I inner-monologued a bit before realizing I was sitting next to some members of the band I had come to see. I greeted them, complimented them on their music, and asked a few questions to pass the time. I ended up talking to these guys for about forty minutes or so, just shooting the shit, occasionally acting as their liaison to the local scene. We commented on the scenes in Fullerton and San Antonio. I talked about how I liked a few of their friends’ bands, and we watched the occasional drunk pass by, even getting a visit from the dancing lime. When my time came to leave and I realized I really had no chance of seeing these guys play tonight, I bade them farewell and hopped once again in my mechanical driving device, never to be seen from again.

It occurred to me on the drive back that this kind of relationship between fan and musician isn’t quite common in the (ahem) “proper” music scene. There is almost no distinction and I’m pretty sure that’s how it’s supposed to be.
That’s why I do it. What’s your excuse?