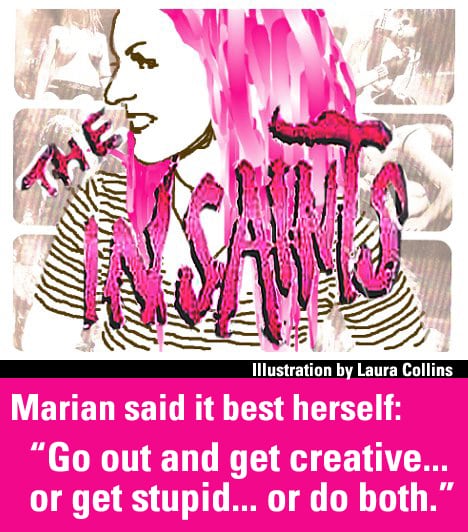 Last Fast Ride: The Life, Love, and Death of a Punk Goddess: A film by Lilly Scourtis about Marian Anderson

Do you enjoy what we post up on Razorcake.org? Razorcake is the first and only official non-profit DIY punk rock fanzine in America primarily dedicated to supporting independent music culture. Please help keep us rolling along and consider making a tax-deductible donation to us. If you are reading this before December 31st, 2013, check out our year-end incentives!

It’s a good night to get lost in the university.

This is my second “History of Punk Class”—technically my first because last meeting we plotted out the curriculum at Remedy Café.

My knowledge of this documentary starts and ends with its title. I know it’s a punk biopic, but have no idea who it’s about.

The doc opens with female vocals hissing soft, dirty punk, the song cascading against a roll of black and white snapshots, tracing a timeline from baby photos and onward.

Will I feel nostalgic for a girl I never knew? Right now, “Marian Anderson” is only a name. Her electric blue (then blonde, then black, then bright red) hair blasts across the screen in clip after clip.

I wonder who she was and why.

No interviewees are introduced on the camera yet—but my skins gets giddy when Tim Armstrong shows up.

Descriptions of Marian scream of impulse and intensity:

“Ran off to San Francisco”

The film starts, somewhat predictably, with stories from Marian’s childhood. (Fun fact: Henry Rollins is the narrator. He must be in every punk doc I’ve ever seen...) Marian’s sister talks about the trains passing behind their childhood backyard and flattening coins on the tracks. Did all punks start with smashing pennies?

Childhood isn’t all innocent curiosity. In Marian’s Maximum Rock’n’roll interview, she revealed the rape and sexual molestation she suffered at the hands of her abusive, alcoholic father. Daddy issues aren’t so cliché when you have to live it yourself. Though her mother went on to divorce the Bad Dad and remarry a better bloke, those childhood traumas left scars on Marian’s bright, battered psyche, soon to match the marks she inflicted on her own arms.

Her mother (off-screen for the entire doc, known only to us as a sweet, strained voice) shows us a picture of Marian before she was saved—and doomed?—by the punk scene. We see a younger Marian with Farrah Fawcet hair, a tame blouse, and open smile—a smile that seems to rebel in its own way against all the abuse she endured.

Age fourteen was her breaking point. From that year on, it was hair dye and suicide. It’s recorded that she made up to twenty attempts on her own life, a stat that makes my checkered past look pretty. Henry tells us of her diagnosed disorders (bipolar disorder, among others) and her hops from juvenile centers to the streets. Friends and lovers alike assert that she was sweet and strong, but weak in the face of various vices, including drinking, drugging, and cutting.

Pictures of her arms pierce me sweetly, soundly: it’s a mirror amplified.

The more I hear of her bad habits and self-abuse, the more human she becomes. Addicts know the center of the spirit and the darkness it can produce. If only they all had something to show for it.

On the streets, she was saved by her sexuality. She shared her bed with the biggest, strongest men to be guaranteed protection. Why must women choose between the safety of their body and their soul?

Despite her play with romantic politics, her street life was still riddled with rape and prostitution (which, for many women, are arguably one in the same).

That could be why she grabbed a microphone. When you have the opportunity to create something raw and real—and more importantly, have a chance to share that with an audience—you snatch the power back. If you make something, you become the master of your art, and for one moment, can feel at peace with your limitations.

Eventually Marian was rehoused with her grandparents in Modesto (a city which will forever make me think of a certain Hold Steady song...).

Old crushes moan over her mohawk, but I want to hear about her music and her mind, not her looks! All we’ve seen of her art so far were quick on-stage clips and some on-screen lyrics. There’s no doubt she was a gorgeous girl, but why reduce her to visual traits? Whether conventionally “ugly” or “attractive,” your physicality distracts from what you have to say. Some audiences would be better off blindfolded.

Finally, we’re introduced to her first act: Five Fingers, an “audio art band” that valued experimentation before harmony. Sometime’s all you can do is yell. Marian said it best herself:

People finally talk about her voice, her lyric-writing, her forceful presence on stage. Following Five Fingers was Baby Alive, a droning, gothic act on the fringe of powerful fem-punk.

During this time Marian got knocked up and hastily wed, but gave the baby girl up to her own parents. Despite her obvious ups and downs, it’s clear Marian’s little girl Hannah was the real love of her life.

After her short stint of domesticity came The Insaints, the band where Marian got a hold of her voice—and her controversy.

This was when Marian mixed sex with the stage. She’d invite fellow strippers and prostitutes to shows and “perform,” drawing a thin line between a punk gig and a striptease.

Marian was the type of girl who would piss on guys in the audience who were too busy staring at her tits to step back.

Non-violent people can use violent (or shocking) means of expression on stage, because up there, they’re safe. They’re untouchable.

All the same, it’s obvious what personal (and professional) risks she took in choosing a sexual conduit for her creative expression. It’s scary for the ground-breakers, and it’s hard for people who push boundaries.

Marian’s legal controversy in 1993 proves me right. She was arrested for “lewd and lascivious behaviour” at one of her shows, leading to a legal battle that inspired petitions and pleas in her favor. After all, hasn’t punk rock always challenged the populace?

They won the case. The Insaints broke up soon after this victory—interviewees tell us that Marian was sick of the sexual expectation that now pervaded in her art. She wanted to do what she wanted to do, not feel obligated to flash her breasts at every show because that’s what show-goers anticipated. She wanted to shed the image of the punk rock sex goddess and become a person again.

People are complicated. You can’t limit someone to one trait, one stereotype. A woman can be a rocker, a sweetheart, a lover, a stripper, and a mother all at once. Personalities are limitless, and in turn, so is our potential.

If only more people accepted that!

Marian tried. When she first moved from San Francisco to Los Angeles, everyone—including her then girlfriend, Danielle—saw hope and change emanate. She played guitar in The Ritalins, seemingly happy to forsake center stage. Other musical projects made their debuts and had their ends (including The Thrill Killers, which she started with her best friend Daniel—not to be confused with her lesbian lover), but even as Marian tried to take a step back, her demons stayed in the spotlight. Her sex work continued, mostly because holding on to a “real” job was too much for her chaotic brain.

She gave herself away. To the sex,  drugs, strip bars and streets. Eventually, her self-destruction culminated in a heroin overdose which sounds a lot like the suicide attempt that finally stuck.

We all kill ourselves one way or another.

Tearing at the camera, Daniel plays an acoustic version of “Misery,” a song he and Marian wrote together.

I sear for another impossible connection. You can’t make friends with the dead— you can only remember them.

How many soft hearts ossify?

I stare around the room at a handful of strangers fast becoming friends. We’re united by a strange, chaotic love. We crawled through the fresh, startling snow to stare at a projection screen in an abandoned classroom, because learning should always be passionate and, through our passions, we should always learn.

Contentment surges through my bones, brightened by my bubbling neurons.

Then I wonder about all the brilliant misfits who have no documentaries to speak for them. What do you do when you have no credits to roll?

Everyone wants a soundtrack.

That’s one of the reasons people make music in the first place.