I had two goals in mind when I went to the Fonda theater on a Saturday night to see the Fat Wreck Chords foursome of ToyGuitar, Western Addiction, Swingin’ Utters, and Lagwagon. My first goal was to write a decent and honest review of the show for Razorcake. I take that job as seriously as a Boy Scout takes… umm, sticks? I don’t know. My second goal was to find Darius Koski from San Francisco’s Swingin’ Utters and thank him for all the heart and soul he has put into the band and my consciousness. More on that later. On to the show!

ToyGuitar was the opening band and lead singer Jack Dalrymple really summed up the show nicely. In between the band’s fast-moving, head-bopping songs, Dalrymple made an aside and reminded the crowd, “This is a great Fat Wreck Chords show.” He’s right. Any of the four bands on the bill could headline this show, even in a large, clunky, very un-DIY venue like the Fonda.

After ToyGuitar was hardcore punk act Western Addiction. This band has raw power. I wish I had been able to make it to Pomona’s VLHS the night before, where Western Addiction played a headlining set. Even though they’re plenty loud and make enough of a presence to hold down this large venue stage, I can only imagine how much more intense their set would feel in a small, DIY venue. It’s a real gift for fans of this band that they’re able to play both ends of the spectrum. Songs like “God Says No” and “The Church of Black Flag” blew me away and reminded me of a quote from hardcore godfather Ian Mackaye who, clearly tired of the same question being asked over and over, told an interviewer, “If you want to see a Minor Threat reunion, go start a band.” I’m glad Western Addiction exists to play their parts in today’s punk landscape.

Now, as promised, the hero story. I wanted to give Darius Koski my thanks. In between sets, as I waited for Swingin’ Utters to go on, I noticed Darius come out from behind the curtain to say hello to Shawn and Mark Stern of Youth Brigade, who I had noticed in the crowd earlier. When he stepped away for a second, I walked up behind him and touched his shoulder. “I just wanted to say thank you.”He gave me a look that was twofold:“You’re welcome,” and “Thanks for saying ‘thanks’.” We shook hands and I didn’t have anything else to say. “That’s all,”I said. He laughed out loud as I awkwardly walked away. It was worth it. I know punks are “supposed” to spit on their heroes instead of walking up to them and saying thank you in a moment of vulnerability, but I don’t care. There are a lot of singers, songwriters, guitarists, punks, and poets whose music I have loved, but Darius is only one of three or four who I might go out of my way to thank, even if it is in a bizarre moment like the one we briefly shared. 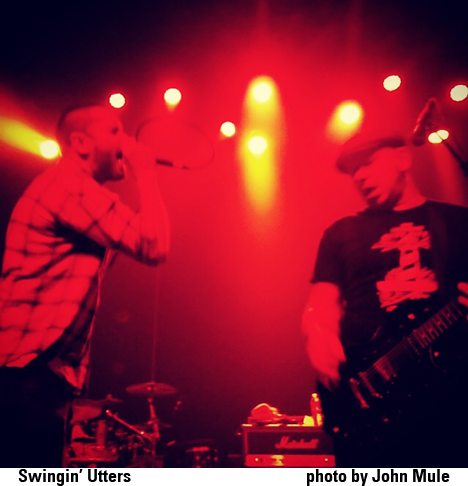 As for the Swingin’ Utters’ set, what can I say? I’m a geeked-out fanboy when it comes to these Bay Area legends. Their music is intertwined with my teens and early twenties in an inexplicable way that will hold me forever. I took the first three songs in the press pit to catch some photos for the zine, and then I went out into the crowd and lost my mind, shaking and dancing to some of my favorite tunes. Johnny, Darius, Greg, Jack, and Miles powered through a set made up of half tracks off of the recently released Fistful of Hollow and half old classics, including “Five Lessons Learned,” “Pills and Smoke,” and, to my surprise, “Brazen Head,” from their 1999 EP of the same name. It could be one of my favorites of the Utters’ releases. They closed the set with “The Next in Line,” a real crowd pleaser from the first note to the last.

And last but, holy shit, not the least: Lagwagon. It’s no secret that this is the band that filled the Fonda Theater that night. The anticipation built after the Utters finished and, when the curtain came up, there was a large banner image of the cover art for Hang, Lagwagon’s first release in nine years. Onto the stage walked bass player Joe Raposo and broke into the opening riff of “Obsolete Absolute” off of their most recent release. As the rest of the musicians joined in, the crowd went apeshit and Fonda security guards got the night’s first round of flying plastic cups and nimble-bodied crowd surfers tossed up and over the railing. The audience reaction mirrored what people had been telling me all night about Hang: they love it. Everyone I had the chance to talk to, in casual conversation around ashtrays and bar stools, had let me know just how excited they were that Lagwagon is back, recording, and touring. JoeyCape hit the stage, pogoing up and down, microphone cable wrapped around his hand, and he didn’t look like he had lost a single thing in Lagwagon’s twenty-two years with Fat Wreck Chords, since their initial release of 1992’s Duh. The crowd was with them, all the way to the end.

Jack Dalrymple’s words were ringing in my ears as I left the Fonda and walked to my truck parked just off Hollywood Blvd. This was a great Fat Wreck Chords show. Each one of these bands, old and new, is doing all they can and more with what they have. And all of us, if we can avoid the plague of flying plastic cups and crowd surfers, are better off for it. If you get a chance, thank someone for the gift of good music.