Okay, I admit it, I feel a bit silly writing this so long after the fact. However, in the end, I’ve decided to do it, for two reasons:
1) To share with you some gorgeous photos, taken by Nikola Predović(http://www.nikolapredovic.com/); and
2) To let you know where you can go see a show in Zagreb, if you happen to be there and you’re having trouble figuring it out.

Plus, better late than never, right?!

Traveling for work, I found myself in the interesting city of Belgrade, Serbia, last November. Wintertime in Belgrade! What can I say, other than: cold!
(I suppose, now residing in the Bay Area, I could say, “Hella cold!” but I haven’t yet taken that particular plunge….)

Anyway, it was an interesting trip. After work, on a wee vacation, I stayed with some lovely women and I explored the city a bit, where I had the benefit of not only being unable to understand signs written in Serbian (Roman alphabet), but also, Serbian (Cyrillic alphabet). Those Serbians! Overachievers in the language department.

As is my way, I did a little poking around to figure out if I could go see a punk show in Belgrade. One of the things I did was check in with my friend Jan, who’s in the Czech band Remek (www.myspace.com/remekdiy and http://remekdiy.bandcamp.com/) to see if he had any Serb contacts. He hooked me up with HA-KO Bastards (http://www.facebook.com/HA.KO.Bastards), a label in Belgrade. I wrote to them. Ljuba wrote back and was so super helpful!

Ljuba informed me that there was a show at BIGZ building in Old Belgrade (http://en.wikipedia.org/wiki/BIGZ_building), which I was told is an interesting building (it was built as the headquarters of the National Printing Institution of Yugoslavia, and completed in 1941), the “closest to squat we have around here, lots of alternative creative stuff going on.” I really wanted to check it out, but unfortunately, it was on Friday night, and after I’d finally finished up work, it was late and I was pooped. So, I didn’t go, but I want to let you know about this place, so that you can look into it if you find yourself in Belgrade wanting to see a show.

Unfortunately, it seemed that it was not meant to be. I made my way over to where I thought it was, but there was nothing going on. The address was right across from a park, and I walked around and around that park, listening and keeping my eyes peeled in case there were any punks loitering about. It’s been known to happen! I asked people. I walked a couple of blocks in both directions. I even saw some Fest flyers on a telephone pole, and I just knew, I am so close! Alas, I could not track it down, so finally I left.

A few days later when I checked my email, I saw there was a message from Ljuba saying, “I couldn’t go to the matinee because of work but later I heard it was rescheduled for another weekend. I hope you didn’t get all the way there and find out nothing was going on.” Curses! But at least that made me feel that I really had been in the right place after all, and I will have to try again if I ever find myself once more in Belgrade. If you go visit, I hope you have more luck! 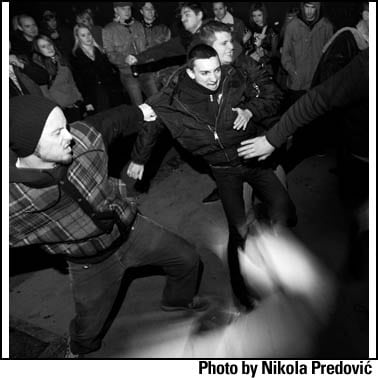 On to Zagreb, Croatia……

In Zagreb I didn’t have anything lined up ahead of time so I just looked online, went into record and music stores to see if I could find anything out, and asked around. With luck, I found out that Krum Bums were playing with a Croatian band called Passive Aggressive at Attack! the night before I was leaving. Fun!

I should mention that it was also a bit cold in Zagreb at that time, around twenty degrees (Fahrenheit) or so. I had long johns under my jeans and two pairs of socks and lots of shirts and I was all scrunched up under scarves and gloves. I was determined to sightsee; even if I was freezing my ass off (I’ve gotten wimpier since leaving the East Coast)! Thoughtfully, there was many an opportunity for hot chocolate or mulled wine at Trg bana Jelačića (the main square) and other places.

However, I was worried, I had a feeling… I just knew the show was going to be at a squat or some other such place not terribly well-heated. “Please let Attack! be an actual bar or club,” I could be heard whispering to myself as I tourist-ed my way around the city.

But no! Sadly, my fears were well founded. Attack! (http://www.attack.hr/), though a very cool spot—if I understood correctly, also a cultural space that shows movies and has an infoshop, as well as live shows—was a little on the chilly side. You could see your breath inside, for heaven’s sakes! As the bands did sound check, I wondered how they could actually get their fingers to move on the guitar. Mine were feeling like icicles (see, totally wimpy)!

Regardless, it was a good time. Passive Aggressive (http://www.myspace.com/passivepunx) played fun, fast, kind of straight-ahead hardcore. Krum Bums, from Texas (http://www.myspace.com/krumbums%20/http://www.facebook.com/krumbums), are often fast but are a little more street / crusty punk. It wasn’t packed but there was some drinking and dancing and it even seemed to warm up a little! Between bands, I had a nice time chatting with one of the guys behind the counter (selling beers), and I even somehow made the last tram of the night once I left. I wish I could have stayed a bit longer in Zagreb to check out some more music (especially more local bands), but I was glad that I made that show and I would definitely recommend seeing what Attack! has going on if you find yourself in that corner of the world.