Last night I went to check out KowloonWalledCity and Replicator at Hemlock. Without knowing much about the history of the name, I have to say that I thought “KowloonWalledCity” was an excellent name for a band. Today I learned more about it. If we put our faith in Wikipedia, we learn:

“The history of the WalledCity (known as Kowloon then) can be traced back to the Song Dynasty (960–1279), where it served as a watchpost defending the area against pirates and managing the production of salt. It was rebuilt as a fort in the mid-1800s on the same site on the Kowloon Peninsula of Hong Kong. After the ceding of Hong Kong Island to Britain in 1842 in accordance to the Treaty of Nanjing, the Qing (Chinese) authorities felt it necessary for them to establish a military/administrative post to rule the area and to check further British influence in the area.

The Convention for the Extension of Hong Kong Territory of 1898, which handed additional parts of Hong Kong (the New Territories) to Britain for 99 years, excluded the Walled City, with a population of roughly 700, and stated that China could continue to keep troops there, so long as they did not interfere with Britain’s temporary rule. Britain quickly went back on this unofficial part of the agreement, attacking KowloonWalledCity in 1899, only to find it deserted. They did nothing with it or to the outpost, and thus sent the question of KowloonWalledCity’s ownership squarely into the air. The outpost consisted of a yamen (any local bureaucrat’s, or mandarin’s, office and residence of the Chinese Empire), as well as other buildings (which eventually grew into a low-lying, densely packed neighborhood within the walls), in the era between the 1890s and the 1940s. The enclave remained part of Chinese territory despite the turbulent events of the early 20th century that saw the fall of the Qing government, establishment of a Republic of China in 1911 and later, the People’s Republic of China in 1949.

The Walled City remained a curiosity – and a tourist attraction where British colonials and tourists could have a taste of the old China – until 1940, when during its WWII occupation of Hong Kong, Japan evicted people from the city, and then demolished much of the city – including the wall – to provide building materials for the nearby Kai Tak Aerodrome.”

Archaeological investigations were conducted in 1993 and 1994 and some remains were found, including two stone plaques inscribed with “South Gate” and “KowloonWalledCity” from the original South Gate, foundations of the city wall, a drainage ditch and a flagstone path.  Wikipedia tells us that the Government decided to preserve the remnants of the South Gate on-site for display to the public. The two stone plaques are displayed beside the remnants and the Kowloon Walled City South Gate Remnants were declared a monument in 1996.

And there’s your history lesson for the day!!

I’m not sure if KowloonWalledCity (http://myspace.com/kowloonwalledcity) the band is appropriate music for KowloonWalledCity the place, but if the place or the former residents were into heavy, slow metal, then it’s a match made in heaven. (The place has evidently been referred to in popular culture in various ways (books, movies and video games); it could be that the band decided on that name because of some impressions they got from those sources rather than the historical reality, but of course I have no idea.) Anyway, I wasn’t sure if I was going to be into them ‘cause sometimes I don’t dig metal that’s on the slower side, but I really liked them. Sakes alive, they were loud! When I was listening at first, I thought it sounded like Slayer was upstairs taking a nap while the guitarists from Quicksand played video games downstairs (to later be joined by the the bassist from the A-Frames), but when it got a little darker, I thought surely Slayer must be taking a nap in the cellar. They were heavy. It was fun! I feel like I’ve been seeing mostly faster stuff lately; so, it was a nice change to check out a slower band and really enjoy it.

They have two guitarists, a bassist, and a drummer. One of the guitarists also sings, if you want to call it that rather than, oh, I don’t know, screaming. He was really having at it. He reminded me of Dennis from Refused—he was totally screaming, but it had just a wee high bit to it that kept it from sounding too death metal (which probably would have put me off). They had a lot of excellent rythyms, and at one point, may have been in their third song, which was my favorite and a little faster than the others, the end part reminded me of Some Girls a little bit (maybe Some Girls on the wrong, slower, speed). Good stuff! The drummer kept things interesting with some sweet fills, and one of the guitarists had a weird turkey sticker on his guitar.

I was disappointed that they didn’t have any merchandise for sale because I was really into that third song, but hopefully it won’t be hard to find. Fans of the Melvins and Pelican would probably dig them. 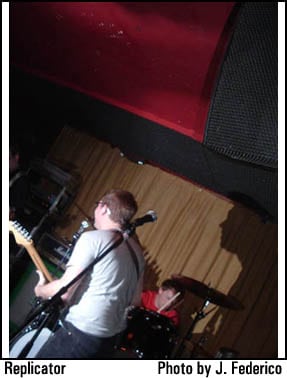 Replicator (http://www.replicator5000.com/), also from the Bay Area, was the headliner and was apparently their last show. Although I obviously was exceedingly late in my discovery (I’m not sure where I got wind of them in the first place), I’m glad I got to see them play at least once ‘cause they were excellent!

Quite different from KowloonWalledCity. I’d say they were just as intense, although in a totally different way. They’re a little harder to put your finger on music-wise, but maybe I’d put them in some kind of post-punk camp. I’m not really sure. A lot of various thoughts swam through my head as I was listening: Mike Watt. David Yow. Dead Milkmen. Steve Albini. Sonic Youth. Pixies. The Exploder. They have (had, I guess) a guitarist, bassist/keyboardist, and drummer. The guitarist sang the most, but the bassist also sang a few songs. Although their voices were quite different, I liked them both. The singer/guitarist was totally mental and intense with his singing in a kind of pseudo-nerd way (if you know what I mean) and I really loved that. The keyboardist sang a song about sex with robots, and they did seem to have some kind of overall machines or maybe space or aliens or some kind of Man Or Astroman (only totally minus the surf) thing going on.

They had interesting time changes and added parts like computer voices and stuff like that. At least once the keyboard (which didn’t figure that prominently in the songs I heard) had an unexpected death rock, scary kind of sound. The bassist and guitarists were quite funny and seemed like smarty-pants. I wouldn’t be surprised if their lyrics reflect that (hopefully the CD I picked up has lyrics!). I certainly would have liked to see them play more than once throughout the course of their existence, but I’m happy I got the opportunity, and they will live on through the beauty and mystery that is recorded sound!