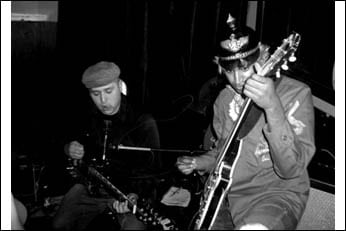 King Khan & BBQ Show, the Flakes, Riff Randles, and the Mothballs: Live at Thee Parkside in San Francisco By Benke

Pedigree. For some bands it holds up. For others, it's not so great. Stiv Bators, as an example. The Dead Boys ruled. Lords of the New Church? Well, uh... Pavement redefined a genre - Steven Malkmus and his gang were the epitome of '90s, groovy, basement, lo-fi indie rock, played with an effortless nonchalance that rewrote the parameters of underground music. Steven's next project, Steven Malkmus and the Jicks, was noticeably less influential. A core group of international garage rock imbeciles carry on fifty years of rock'n'roll tradition: the yelps, the screams, the bird calls, the riffs, the hooks, the shama-lamas, the ding-dongs, the playing-for-the-sake-of-making-some-noise, and the guys who have studied the craft and practiced for the love of the genre. The Spaceshits, the Rip Offs, the Mummies, the Loose Lips, Nagg...sometimes pedigree ain't enough to make things work. Thank god that's not the case with these bands and this show. For those who bear witness and testify to the dedication of the rock, the faith carries on. May whomever believeth in Him never parish and have eternal life. 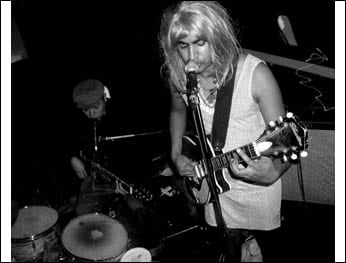 Thee Parkside is the venue and it is small. The Mothballs make good use of the limited time and space available, the drummer taking the stage and the rest of the band, lead singer/guitarist, keyboard maniac, bass player and saxaphonist, setting up immediately in front of the drummer on the dance floor. What follows is the purest, rockin'est young degenerate set of inimitable rock'n'roll tunes this side of San Jose. Two handfuls of top drawer originals and two incomparable covers of the Monks and Loli and the Chones set these jittery rockers apart from the masses. The guy on sax and the hyperkinetic dude on keyboards have to be experienced to be believed. See them now before they have a proper release and become "the next big thing" outta Oakland. Wurd. 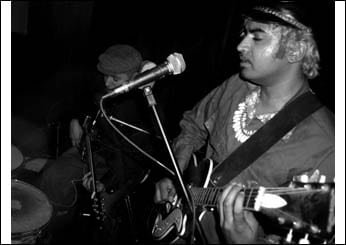 The Riff Randles are next, and, wow, what an unexpected surprise. Forget that these gals crossed into the USA sans instruments for their tour; forget that it took the better part of an hour for them to secure gear on which to play; forget that these young women are unequivocally gorgeous in their own individual ways; they rock in the mode of Ramones, Muffs, Eyeliners and the Fastbacks (no small compliment coming from the Cultural Ambassador - the Fastbacks are my all-time favorite band). Quite simply, I was blown the fuck away by the Riff Randles. Catchy, well-played, Cub-influenced punk rock that will raise your saccharine levels and teach you a few things about songwriting. 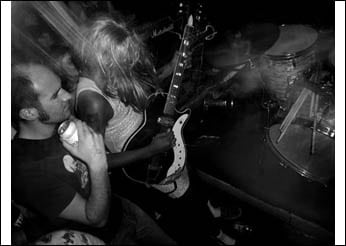 The next band, the Flakes, are, without a doubt, the best band going today, and the set they unleashed upon the patrons of Thee Parkside this night only worked to solidify their place in the pantheon of underground rock. Motherfucker, the Flakes defy anyone in the room to remain still... and if, say, your girlfriend happened to accompany you to the show, forget about givin' her a ride home, 'cause the Flakes will have stolen her heart and her virginity, assuming she still has one or the other. Drummer Russell Quan made a bold and unique statement by stripping off his Monkees sweatshirt to reveal a T-SHIRT BEARING THE EXACT SAME PRINT. As one might imagine, the cohesion of this fact alone set the crowd on alert, and this being their hometown, everyone knew what to expect. Save me. Though I had seen the band once before, I was ill prepared for the onslaught that ensued. Mind you, I had received the Back to School CD for review a few weeks earlier courtesy of Todd Taylor, and I gave it my highest possible recommendation. It didn't prepare me for the live show, which took a few songs to get up to speed. But, once the initial drum fill to "Good Lovin'" rolled off the kit, the Flakes grabbed everyone in the room by the genitals and brought them to full arousal. They played a bunch of tunes from the LP, but the standout selections were two covers that took the hipster crowd and whipped them shamefully into submission. "Berserk" can't even begin to describe the reaction of the audience when Peepin' John announced that the band would be playing a song they had first played a week prior at the debut of a Real Kids documentary. "All Kindsa Girls" sounded as if Peepin' were channeling the undead ghost of John Felice. It was as close to a religious experience as I've ever had. Then they decided to close the set with a cover of the 13th Floor Elevators "You're Gonna Miss Me," complete with fluttering, unidentifiable bird call noises at the beginning. It absolutely floored all in attendance. The Flakes don't play that often, so if they come to your town, do the right thing - bring the hottest girls you know to the show and offer them up as a sacrifice to the Flakes. 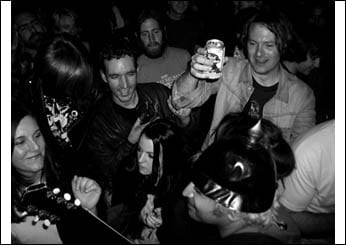 Following a hometown super-group would be too much to ask of most any band. The King Khan & BBQ Show aren't most bands. In fact, they're just two guys, friends, blood brothers, who grew up together and picked up the same knack for writing hits reminiscent of early '50s rock'n'roll and the best of '60s punk. Anticipation: palpable. Excitement levels: off the chart. The audience crowded so close to the stage that King Khan had to ask us to take a collective step back so he could tune his guitar. The first chords rang down like coke-laced manna from heaven. Khan boogied as he effortlessly laid down Chuck Berry leads, BBQ holding the rhythm and beat in a fashion few can emulate. The intro became "Fish Fight" and a surge of carnal mayhem flowed through the crowd. We were well on our way to... and the mics went dead. Two, five, ten minutes went by, KK and BBQ continuing to play instrumentals of the songs on the album, but growing more and more frustrated with the equipment malfunction. BBQ was most visibly upset, nearly storming off the stage after ten minutes and throwing beer at the front row out of his bottle. Frankly, I was wondering how the first three bands could make it through their sets without any technical problems whatsoever, but the headliners couldn't get either of their vocal mics to function. Of course, I was hammered at this point, and just as soon as the moment threatened to become sobering, the mics were saved, along with the set, and KK & BBQ proceeded to bring the sincerest, most righteous rock this side of Montreal. Hearing songs on vinyl is one thing, but to hear the soulful groove of "Shake Real Low," the baritone harmonies on "Waddlin' Around," and the sheer '50s genius of "Love You So" in a live setting was transcendent. They even busted out the song from the A-side of their SSLD single (the name of which I'm too drunk to remember), which sounded absolutely stunning (having heard the shabby recording on vinyl, I wondered why they had bothered to record it at all). I'm sure either of them would tell you that it wasn't their best show, and perhaps it wasn't. But nobody at Thee Parkside cared. As far as I'm concerned, King Khan and BBQ are full-fledged Cultural Ambassadors of the highest order.